Ahrar al-Sham, once one of the largest factions of the Syrian opposition, has divided into two wings: one with ties to the Free Syrian Army and another close to Hayat Tahrir al-Sham. 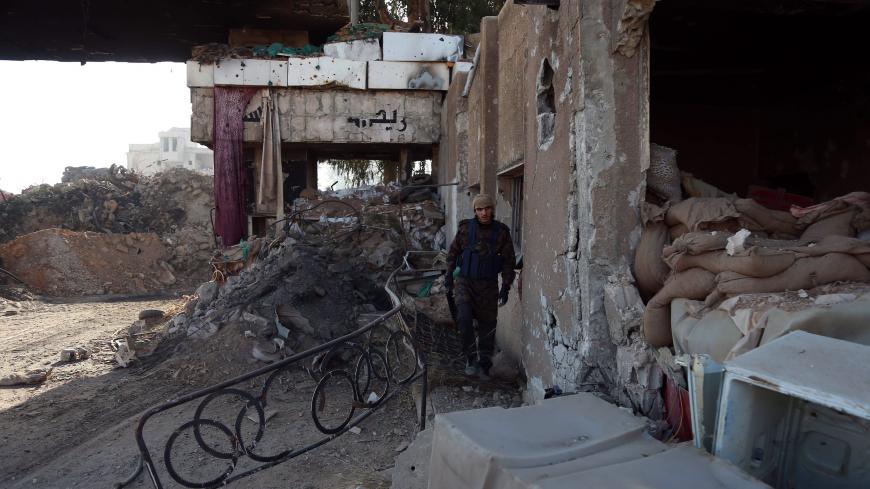 A rebel fighter from Ahrar al-Sham walks past the debris of damaged buildings in the rebel-held besieged town of Harasta, in the eastern Ghouta region on the outskirts of Damascus, on Nov. 16, 2017. - ABDULMONAM EASSA/AFP via Getty Images

The dismissal followed a group of the movement’s military leaders calling for reinstating the former leader of Ahrar al-Sham, Hassan Soufan. Soufan, who was dismissed in 2019, is known for being very close to Hayat Tahrir al-Sham (HTS), a UN- and US-designated terrorist organization and the dominant outfit in Idlib. Ahrar al-Sham's leadership feared he would make the movement part of HTS.

Ahrar al-Sham, a Salafist armed group affiliated with the Turkish-backed Free Syrian Army (FSA), is one of the largest opposition groups in Syria. One wing has remained close to the FSA, while another, led by Soufan, has expressed a desire for rapprochement with HTS.

Orabi Abdel-Hay Orabi, a Syrian journalist specializing in Islamic and jihadist groups and residing in Turkey, told Al-Monitor that Soufan, a charismatic leader, “never accepted the way he was removed from the movement’s hierarchy.”

He added, “Senior Ahrar al-Sham leaders were not pleased with his behavior, which they believed arbitrarily disrupted the mechanisms by which decisions are made. He had formed a council of advisers for himself and tried to undermine the Shura Council. After his dismissal, he finessed certain figures in the movement, such as the head of its military wing [Darwish] and the commander of the coastal region [known as Abu Fares Daraa], and he won their loyalty. However, the movement’s leadership began dismissing figures loyal to him, starting with Daraa and distributed his men to other posts.”

He explained, “HTS has supported Soufan’s wing since the attempts to dismiss figures loyal to him began; it arrested the commander of the Commandos Brigade [Abu Bakr Maghawir on Oct. 12]. HTS also backed Soufan in taking control on Oct. 24 of the movement’s headquarters in al-Fuah, Binnish and Arihah, urging its own members to join Soufan’s men in taking over posts in southern Idlib.”

Orabi noted, “The [Ahrar al-Sham] leadership is mainly furious at the Soufan wing over Soufan and Darwish's efforts to get closer to HTS. Meanwhile, others believe [Soufan's ties] will harm the other factions and place them at risk of being placed on international terror lists and give HTS absolute military and political power without a rival or an independent faction. This would make Ahrar al-Sham, a movement that has fought HTS several times, more like a brigade of HTS.”

Orabi continued, “A Turkish initiative was proposed [on Oct. 26] to resolve the dispute within Ahrar al-Sham. The initiative calls for the formation of a leadership council of six figures, three from each side, and they would appoint new leaders and a new Shura Council. However, Soufan did not accept the plan and tried to impose a fait accompli by controlling the movement’s headquarters in several cities. Ahrar al-Sham responded with flexibility and suggested forming a Shura Council from the leaders of the blocs within the movement and electing a new leadership to put things back on track, but Soufan declared himself the leader of the movement. In response, Ahrar al-Sham members supported Ali Pasha.”

Meanwhile, a military leader close to Soufan told Al-Monitor on condition of anonymity, “The movement's political leadership is detached from reality and makes unilateral decisions without involving anyone else. It also ignores the real leaders, as it only wishes to serve its personal interests. … The leadership continues to make decisions by itself and neglects other voices. It does not want Ahrar al-Sham to be as strong as it was, so all of these factors made us take this step toward pumping new blood into the movement.”

A leading figure in Ahrar al-Sham told Al-Monitor on condition of anonymity, “Some leaders of the military wing rebelled against the leadership’s decision to make some changes in one of the military posts, and Soufan encouraged and supported this rebellion in the hope of hijacking the movement’s decision and taking over its leadership by proclaiming himself the emir of the movement in what can be described as a coup.”

The source added, “The movement was and still is one of the most active factions. But Soufan’s actions contradicted the institutional work on which [Ahrar al-Sham] is based, … leading to the internal division. The group’s legitimate leadership immediately took action to resolve this issue. The group has the military and organizational structure to mobilize popular support and serve the revolution.”