Extensive meetings were held in the past days between Hayat Tahrir al-Sham, which controls Idlib, and the Levant Front, one of the most prominent and strongest groups of the Syrian National Army, in a bid to reach a compromise between the two sides. 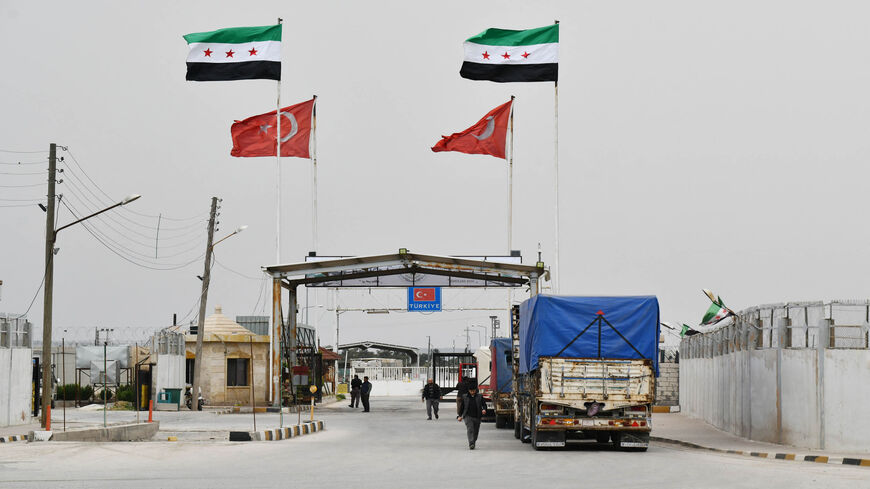 Syrians coming from Turkey go through the Bab al-Salame crossing in the border town of Azaz, to spend the last days of Ramadan and the Eid al-Fitr holiday with family in Syria, in Aleppo province, Syria, April 18, 2022. - Rami al Sayed/AFP via Getty Images

IDLIB, Syria — Commanders from one of the leading factions among Turkish-backed forces in Syria have met with officials in Hayat Tahrir al-Sham (HTS), the most powerful armed group in Idlib, sources tell Al-Monitor.

The Levant Front (al-Jabha al-Shamiya) is considered one of the most organized groups affiliated with the Syrian National Army (SNA) of the Turkish-backed Free Syrian Army (FSA). It includes all the official bodies of the opposition-affiliated Syrian Interim Government. Also, the headquarters of the Syrian opposition’s National Coalition has been built in the city of Azaz, in the northern countryside of Aleppo, which is under the control of the Levant Front, and is seen as the most secure area held by the FSA.

The Levant Front is HTS's main rival, but, unlike the latter, it could not fully expand its control over the FSA areas, as HTS did in Idlib, in northwest Syria.

In 2021, the Levant Front was one of the first military formations to join the military alliance known as the Azm Operations Rooms, which was later joined by the majority of the opposition factions operating in Aleppo countryside. Although the operations room was considered at the time to be a fierce opponent to HTS, the latter remained unchallenged according to observers.

According to a senior source in the Levant Front who spoke to Al-Monitor, the groups’ commanders have recently visited Idlib and met with HTS leaders.

“They agreed on several points, including halting media attacks against each other, facilitating the movement of the Levant Front fighters into Idlib, and vice versa for HTS fighters who would be able to enter the city of Azaz and other Levant Front-controlled areas. The two sides also agreed to come up with a future project to unite all factions,” the source, who refused to reveal its identity, said.

The source added that it was also agreed on facilitating traffic between HTS-controlled areas and those held by the SNA.

Majd Kilany, Idlib-based researcher at the Jusoor Center for Studies, told Al-Monitor, “Unifying ranks between the two sides is not final. The Levant Front had joined the 'Third Legion' [separately from HTS].”

Levant Front leader Abu Ahmad Nour was appointed commander of the Third Legion, which was formed in October 2021 through a merger of six FSA factions.

“Thus, a unified project between the two [HTS and the Levant Front] appears to be far-fetched for two main reasons. First, the different ideologies of the two groups. While the Levant Front is considered to be closer to the Muslim Brotherhood, HTS maintains a Salafist-jihadist project. Second, both are vying for influence in two different areas, which prevents them from unifying their ranks, something that can only develop into economic and security coordination at best,” Kilany said.

He noted, “HTS does not want to unite with any other faction but wants to make a security breakthrough in the north of Aleppo, taking advantage of the area’s need for security and economic coordination in order to create greater influence.”

Kilany explained, “This means further extending control and influence and not forging real alliances or unifying ranks [with other factions]. FSA factions have constant concerns of HTS’ security and influence ambitions, and try not to create any new problems, maintaining security coordination in such a way that benefits them, while preserving good economic coordination without clashing with HTS."

He said that Turkey remains at bay from all these details, but the FSA factions might turn to it should it sense a threat by HTS, which is not the case at the moment.

“HTS is trying to convince Turkey of the viability of its presence in north Aleppo in the FSA-held areas, but has yet to get a Turkish confirmation in this regard,” he pointed out.

Kilany considered that the Saudi-Turkish rapprochement has nothing to do with the rapprochement between HTS and the Levant Front, but he said this could serve as leverage in the future for unifying ranks between the two factions.

Mohamad al-Omar, an Idlib-based media worker close to HTS, told Al-Monitor, “Last year, there was talk about [establishing] a military council between HTS and FSA factions. But this is no longer the case; they turned the page on this suggestion. Today, there have been talks about security and military cooperation only, and renormalizing ties between HTS and the FSA factions, with both sides entering each other’s controlled areas freely.”

He said, “HTS wants a single military council under a single command. But if the council was established along the lines of the FSA — which is only unified for show, while every faction is practically independent from the main command — this is something that HTS will not allow."

Omar added, “There are two examples of the Syrian opposition: HTS and the FSA. While HTS has a strong united command, high discipline and security in its areas, the FSA consists of areas of conflict of influence and the presence of tens of factions with different allegiances, lacking discipline, with every faction having a different leadership."

Muhanad Darwish, media activist based in Idlib, told Al-Monitor, “I think for the moment an alliance uniting HTS and the FSA is far-fetched. There has been rapprochement between the two recently, but that’s it. The two factions are different ideologically and cannot be merged under one alliance. They are also the two biggest factions in Idlib and in the FSA-controlled areas.”

Darwish said, “HTS mainly seeks to be dominant in any alliance with the different factions, which makes them [the factions] reluctant to take the plunge. I don’t believe the factions have specific conditions to accept or reject a merger with HTS, but it all depends on the international community’s reaction, which designates HTS as a terrorist group, namely Turkey. I believe factions will not run the risk of being labeled as terrorists should they merge with HTS."

He believes that the Saudi-Turkish rapprochement will be to the advantage of the Syrian people and the revolution areas in particular, adding that any agreement between Riyadh and Ankara would facilitate the achievement of a common vision between the factions.