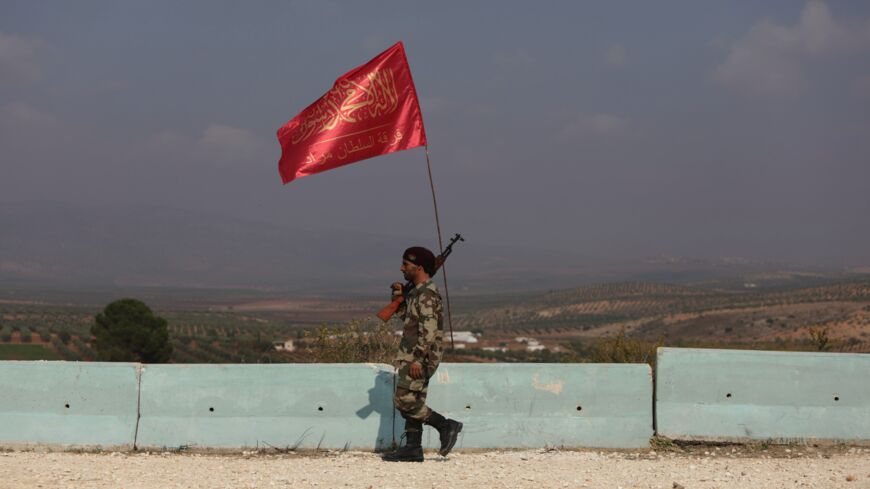 Turkish-backed Syrian fighters of the Sultan Murad Turkoman brigade are pictured during a military show in the Afrin region in the rebel-held northern countryside of Syria's northern Aleppo province on Nov. 17, 2020. - AKR ALKASEM/AFP via Getty Images

The new formation is expected to be led by Al-Jabha al-Shamiya leader Abu Ahmad Nour.

The Azm Operations Room said in a statement published on Oct. 18, “As part of [our] quest to unify [our] components for full integration with the factions, we announce the merger of Jaish al-Islam, Al-Jabha al-Shamiya, al-Majd Corps, Al-Salam Brigade, the Sultan Malik-Shah Brigade and the 51st Brigade to the ranks of the Third Legion.”

This new merger gives the Azm Operations Room greater power and influence in the areas under the control of the FSA in north Syria.

The move has tipped the balance of power among the factions operating under the FSA-affiliated Syrian National Army (SNA). With this latest merger, the Azm Operations Room sought to compete for military leadership in the FSA-held areas against the Syrian Liberation Front (SLF), which is another military wing of the SNA.

The SLF is another merger of FSA-affiliated factions announced in September, which includes the Sultan Suleiman Shah Division, the Hamza Division, al-Mutasim Brigade, Suqour al-Shamal Brigades and the 20th Division.

Another merger between five other FSA factions under the new Harakat Thairun (Revolutionaries Movement) was announced in early October.

However, the latest merger between Al-Jabha al-Shamiya and Jaish al-Islam under the Third Legion is more significant since Jaish al-Islam is considered the archenemy of Hayat Tahrir al-Sham (HTS), which controls the northwestern province of Idlib. Jaish al-Islam had fought Jabhat al-Nusra (before it rebranded into HTS) in eastern Ghouta in 2018 before Syrian regime forces took control of the area.

It seems the new merger will derail any attempts by HTS to get close to Al-Jabha al-Shamiya, establish an alliance with it and enter its areas of influence. In light of this, it seems HTS is now seeking rapprochement with the SLF, the new merger’s main rival.

A meeting between HTS leader Abu Maria al-Qahtani, an Iraqi from Mosul, and SLF leader Mustafa Sejari was reported on the same day the Third Legion was announced on Oct. 18.

Al-Monitor contacted Sejari to comment on the reported meeting, but he refused and neither confirmed nor denied the meeting.

Sources from the SLF told Al-Monitor this meeting between Qahtani and Sejari indeed took place. The talks focused on ways to settle differences between HTS and the SLF, according to sources who described the meeting as friendly.

However, the sources said the two leaders did not reach an agreement and the meeting was only a preliminary one that paved the way for another stage of relations between the two parties.

Azzam added, “Today we are talking about a merger between these components to form one body and one faction. All the integration and coordination steps that Azm Operations Room is taking mainly aim at beefing up forces and uniting military efforts ahead of any future battle imposed by field or military developments.”

He denied that the merger between Jaish al-Islam and Al-Jabhat al-Shamiya is related to countering HTS.

Waiel Olwan, a Turkey-based researcher at the Jusoor Center for Studies, told Al-Monitor, “The meeting that took place between the HTS and SLF leaders was a personal meeting, not an official one representing the two factions. Sejari met with Qahtani upon Qahtani’s request, and the meeting was personal rather than official.”

He added, “HTS is trying to create political communication channels with all SNA factions. It may have sought to establish partnerships with the SNA, but following the latter’s mergers, HTS lost hope for any such partnerships. HTS wants to have a presence within the areas of the Turkish-backed factions, but the SLF is wary of getting too close to HTS.”

Qais al-Hamwi, a journalist who resides in the northern countryside of Aleppo, told Al-Monitor, “HTS constantly changes its stances. Just like it initially backed the Islamic State and then al-Qaeda before splitting from the latter, HTS is now seeking rapprochement with SNA factions.”

Hamwi explained, “It seems HTS and the SNA share common interests, especially after SNA factions formed the Azm Operations Room. By getting close to the SNA, HTS is seeking to be removed from global terrorist lists by portraying itself as a group fighting jihadist factions.”