A group of factions affiliated with the Turkish-backed Free Syrian Army have formed a new alliance known as the Syrian Liberation Front intended to end the power struggle between Turkey’s allied factions in northern Syria. 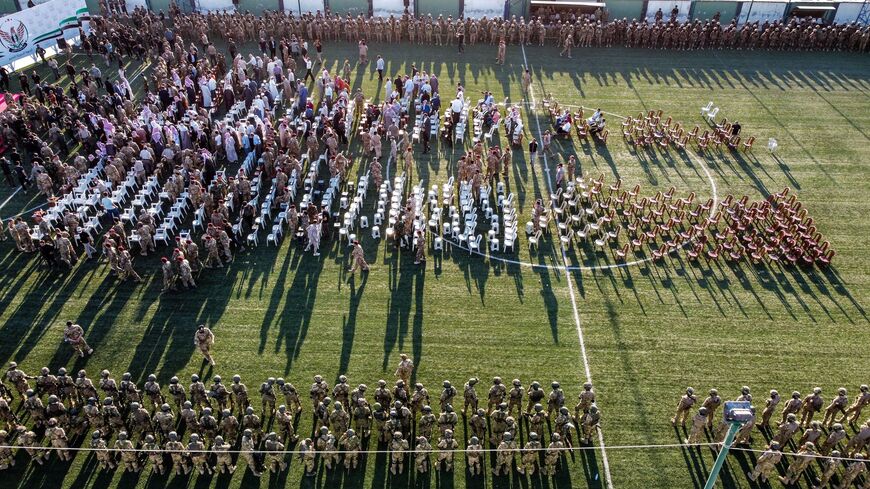 This picture taken on Sept. 9, 2021, shows an aerial view of Turkey-backed factions of Syrian fighters gathering to announce the formation of a new unit during a military parade near Bizaah in a rebel-held area north of Syria's Aleppo province. - BAKR ALKASEM/AFP via Getty Images

IDLIB, Syria — On Sept. 9, five factions affiliated with the Turkish-backed Free Syrian Army announced that they had merged into the new “Syrian Liberation Front.” They include the Sultan Suleiman Shah Division, Hamza Division, al-Mutasim Brigade, Suqour al-Shamal Brigades and the 20th Division.

Mutasim Brigade leader Mutasim al-Abbas was appointed as commander of the new Syrian Liberation Front, with Hamza Division leader Saif Bolad serving as his deputy. Nearly 15,000 fighters have joined the front from the three Syrian areas where Turkey led military operations — the Euphrates Shield, the Olive Branch, and the Peace Spring areas — in the countryside of Aleppo, Raqqa and Hasakah.

During a ceremony marking the merger, Abbas said, “The Sultan Suleiman Shah Division, Hamza Division, al-Mutasim Brigade, Suqour al-Shamal Brigades, and the 20th Division are no longer separate factions, but have completely merged to form a single, effective leadership under the FSA’s umbrella.”

Mustafa Sejari, a member of the leadership of the Syrian Liberation Front who lives in the northern countryside of Aleppo, told Al-Monitor, “The Syrian Liberation Front is carrying out a long-awaited initiative based on integration and solidarity and prioritizing the public interest. We seek to offer an attractive, integrating model to better serve the interests of our people, preserve our land, and improve the situation in the liberated areas.”

He added, “Turkey has always been supportive of the positions of the Syrian people and the FSA formations.”

Meanwhile, Firas Faham, a researcher at the Istanbul-based Jusoor Center for Studies who resides in Turkey, told Al-Monitor, “These new formations have internal and external motives. These factions want to reposition themselves and their alliances, allowing them a greater role and a wider margin of maneuver and to benefit from more economic resources.”

He added, “Some factions also want to strengthen their position to face other factions that they feel threatened by. Meanwhile, Turkey wants to mitigate divisions and merge some factions, which will directly reflect on the security of the areas it is present in.”

Faham explained, “The Syrian Liberation Front's factions are concerned about attacks by other factions affiliated with the Azm Operations Room, which was formed [by FSA factions] in mid-July. However, we cannot say that the Syrian Liberation Front was formed in response to the Azm Operations Rooms. Not all factions have the same motives, as each faction has its own purposes that made it join this front.”

Faham stressed, “If the factions operating under both the Azm Operations Room and the Syrian Liberation Front succeed in controlling security in the area, then these formations will have reduced the factional division. But if their previous differences remain unresolved, the competition would increase and the power struggle would be even more dangerous.”

Speaking about the Turkish role in these formations, he said, “Turkey wants to end division and unify its allied factions as much as possible. The Turkish side prefers having a unified leadership through which it can achieve its interests. The factions are, however, still divided, and Turkey is not responsible for this.”

Qais Mohammed, an alias for a freelance journalist residing in the northern countryside of Aleppo, told Al-Monitor, “These formations are only for show and they are not united in reality. Each faction still has its own leaders and members who do not take orders from the leaders of other factions. These formations only aim to protect themselves. Whenever factions feel threatened, they form new military bodies to protect themselves, but once the threat is gone, the formations fall apart.”

He added, “Turkey does not want the factions to unite because the Turks who deal with the factions are themselves competing against each other. Each Turkish wing supports a group of factions, and it is not in the interest of the factions to unite, because each faction is economically and militarily independent. Once they unite, these privileges will disappear, so the factions will remain scattered. Civilians in the areas controlled by those factions only want the battles to end and security to be achieved. The people do not care for formations; they want the power struggle to end.”