Regular meetings between the Turkish-backed Free Syrian Army factions and Hayat Tahrir al-Sham leaders in northwestern Syria will open a new page in relations between the two parties and might pave the way for military integration in the future. 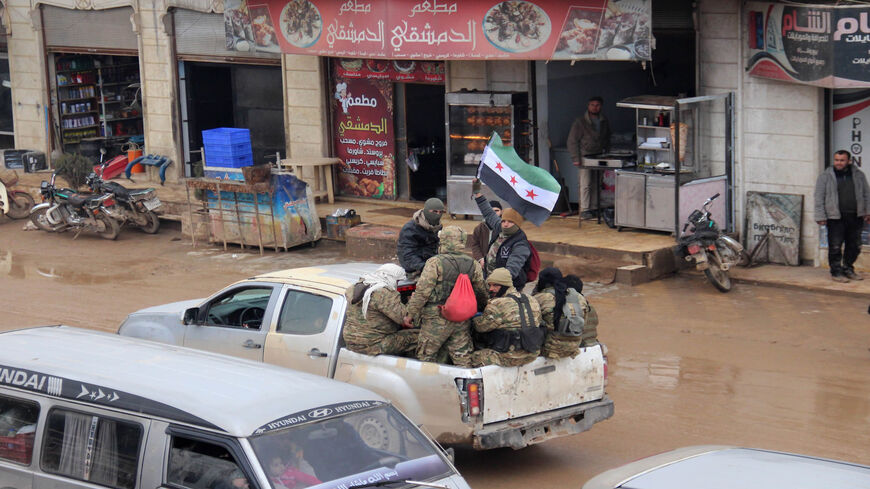 It seems that HTS is seriously trying to coordinate with the factions on security and military issues as a prelude to bigger steps that may reach full integration with the FSA factions. This would constitute the bedrock for a single civil and military administration that would govern the areas outside the control of the Syrian government in northwestern Syria.

Opposition circles and jihadis opposing HTS have been recently circulating leaks about regular meetings between HTS and FSA leaders. The meetings are reportedly being held particularly with a number of leaders from the FSA-affiliated Hayat Thaeroon for Liberation (Uprising for the Liberation), which includes the major factions backed by Turkey in Aleppo countryside.

These meetings and attempts at rapprochement have raised the ire of jihadis opposed to HTS as well as many FSA supporters who blame HTS for weakening the FSA and describe its fighters as infidels who have harmed the Syrian revolution during the past years.

Meng continued, “What interest could Hayat Thaeroon for Liberation possibly have in dealing with a group that killed Syrians, dismantled FSA factions, displaced the rebels and paved the way for Russia and [Bashar] al-Assad's gangs to seize the lands of the revolution?”

In response to these reports, Mohammad Nour, director of the media office of Hayat Thaeroon for Liberation, told Al-Monitor, “Talk about meetings between the leaders of the FSA-affiliated Hayat Thaeroon for Liberation and HTS is untrue. There are no such meetings, unlike what the jihadis are claiming. We have not received any HTS leaders, and our relations with them are not fine. I wonder where these rumors are coming from.”

Hayat Thaeroon for Liberation was established on Jan. 23, 2022, when the Thaeroon Movement — which includes nine FSA factions, most notably the Sultan Murad Division and Sultan Suleiman Shah Division — announced a merger with the Syrian Liberation Front — which in turn consists of two factions: the Hamza Division and the Mu’tasim Division. The merger was part of the formation of a new entity called Hayat Thaeroon for Liberation led by Issa who is close to Turkey, and is a Syrian Turkmen.

After the announcement, the FSA factions were divided into four main military blocs: the First Corps, the Third Corps, Hayat Thaeroon for Liberation and the National Front for Liberation.

Meanwhile, the jihadis opposed to HTS in Idlib are also circulating leaks regarding several points that were agreed upon between HTS and Hayat Thaeroon for Liberation.

On March 10, As-Seraa wrote on his Telegram channel, “Golani requested a military base for HTS in Marea in Aleppo countryside, but Issa rejected the request.”

Other anti-HTS jihadis said that the Turkish security officials who manage the support for the FSA are the ones encouraging rapprochement between HTS and the Thaeroon factions. These jihadis believe that the events portend an attempt at reconciliation between the FSA and HTS, which eliminated many FSA factions in the past years, and it is now seeking rapprochement for its own sake.

Ali Abu al-Hassan, a Kuwaiti jihadist, said in a Feb. 25 Telegram post addressing the FSA rebels, “Dear rebels, the revolution has no interest in reconciling with HTS. The only benefit is for HTS, after all its tyranny. You will give them full control after all the sacrifices you have made, as though you have made none. You will betray the blood of the martyrs and every oppressed and homeless person in their prisons. If that is the case, then you might as well run back to Assad’s arms.”

Muzamjar al-Sham, a jihadist who defected from HTS, said on Telegram March 13 that some FSA leaders are deceiving the opposition public when they say that it is in the interest of the revolution to end disputes with HTS and seek rapprochement.

In another message March 13, Sham said that most FSA factions — not just Hayat Thaeroon for Liberation — are coordinating with HTS and Golani and drawing closer to them, and they include the Third Corps, which made several agreements with HTS on oil trade and economic projects. The Third Corps is still welcoming HTS leaders in Aleppo countryside, as nothing can match money and interests, he noted.

He added, “Needless to repeat that Golani is manipulating these foolish leaders to succeed in his project aimed at controlling the north alongside Idlib, and to single-handedly rule. Even the elderly and children of these areas know this.”

An FSA leader told Al-Monitor on condition of anonymity, “Information about meetings between HTS and FSA factions is accurate, as part of the security, military and economic coordination between several factions and HTS. Recently, they have been holding regular meetings, but they do not want to go public with them, and they prefer to keep matters confidential, especially the factions, due to the sensitivity of the issue and since HTS is classified as a terrorist group.”

It seems that the leaks about the meetings between HTS and some FSA factions are true. Some FSA factions believe it is important to deal with HTS, which is designated as a terrorist organization, to possibly convince it to dismantle itself and form new military formations to get rid of the terrorism classification.

These steps may pave the way for merging the HTS-affiliated Salvation Government in Idlib and the opposition-affiliated interim government in Aleppo countryside so that all opposition areas are under a unified civil and military authority. However, these alleged aspirations require a concession from HTS, and there are questions about the group’s and its leader’s readiness to make concessions and sacrifice the gains it made recently.

Al-Monitor reached out to HTS’ media office, but it neither confirmed nor denied the meetings between HTS and FSA leaders, notably Hayat Thaeroon for Liberation.