The opponents of Hayat Tahrir al-Sham are accusing it of trying to wrest control over the areas of the Turkish-backed factions in north Syria, in light of its recent rapprochement with some of these factions. 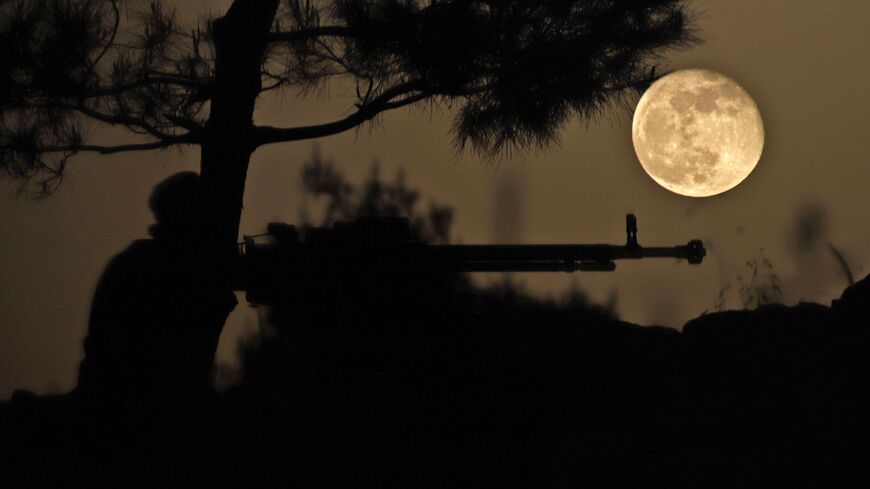 April's pink super moon rises behind a fighter of the Turkish-backed Free Syrian Army in the rebel-held southern countryside of Syria's northwestern province of Idlib on April 28, 2021. - ABDULAZIZ KETAZ/AFP via Getty Images

Tensions between Hayat Tahrir al-Sham, which controls Syria’s northwestern province of Idlib, and Turkish-backed Syrian factions are escalating once again. The Azm Operations Room, which brings together a number of Turkish-backed Free Syrian Army factions, accuses HTS of planning to enter FSA-held areas in north Syria.

Most recently, Sheikh Ahmed al-Helwi, a member of the body's Grievance Response Committee, released an audio message in which he criticized the leader of the FSA-affiliated Suleiman Shah Brigade for corruption-related issues.

HTS leader Abu Maria al-Qahtani responded to the audio recording, saying on Telegram Dec. 31 before his account was removed on Jan. 4 that Helwi attacked the Suleiman Shah Brigade and its leader Mohammed Jassem over their ties to HTS and not because of corruption, as he claimed.

Qahtani stressed that HTS has relations with all the factions, and threatened HTS’ opponents, saying, “In the future HTS will be everywhere, and all areas will be unified as one.”

Qahtani’s threats raised the concerns of FSA factions that HTS may be planning to fight them and take control of their areas.

A source affiliated with the FSA told Al-Monitor on condition of anonymity that there are real fears among some leaders of the FSA factions that HTS will penetrate their areas of control, especially in Afrin, Azaz and al-Bab, through groups and factions that do not publicly declare their affiliation with HTS.

FSA leader Cpt. Salem al-Mohammed, who resides in the northern countryside of Aleppo, told Al-Monitor, “The factions oppose any move by HTS that may target the areas under their control. The FSA has been warned against any attempts at rapprochement by HTS. We, as FSA factions, cannot form a united [opposition] front with HTS because it is classified as a terrorist organization, and such move will reflect badly on any faction that cooperates with HTS.”

In 2018, HTS was designated by the United States as a terrorist organization with the UN Security Council including it as a sanctioned entity linked to the Islamic State, al‑Qaeda, and associated individuals and groups.

“HTS wants to expand its influence and control the factions' areas. It is currently negotiating with the factions in a bid to unify the opposition ranks. HTS is taking advantage of the internal disputes among the FSA factions themselves, by supporting one against the other, in order to penetrate the FSA-controlled areas,” Mohammed added.

Mohammed al-Omar, a media activist close to HTS who lives in the Idlib countryside, told Al-Monitor, “HTS did not announce a plan to control the areas of the factions close to Turkey. HTS has strong relations with some of these factions, and its leaders exchanged visits with some of their leaders. HTS wants to unify the opposition in north Syria and to break the state of stagnation and division between the factions.”

He argued that some of the faction leaders are concerned that a unified front by all the factions, including HTS, would threaten their interests. “Some factions would be weakened and could lose their power and influence if a unified opposition front is formed. This is why they are hindering efforts in this respect.”

Omar added, “HTS has one leadership and has one decision-making authority, while the FSA factions have dozens of leaders. They are fragmented, and their decision is not in their hands, but in the hands of Turkey, which had previously suggested handing over the security of Afrin to HTS. HTS, however, refused the offer, saying it either gets full control over all levels, most notably the judicial level, or it does not want security control over Afrin. No party representing the Syrian National Army was present when the offer was made.”

Al-Monitor was unable to independently verify this information.

Raed al-Hamid, an Erbil-based expert on armed groups, told Al-Monitor, “HTS does not seem in a position to launch attacks or engage in combat with factions allied with Turkey. For its part, Turkey cannot engage in direct confrontation with HTS or mobilize the Syrian National Army to fight it, since Turkey views it as the most disciplined military entity that can be relied upon in the future, whether in taking over the FSA-held areas or in any possible political settlement in which HTS must be a party.”

Hamid further argued that HTS leader Abu Mohammed al-Golani does not seem to be in a position to take control of the areas under FSA control. “This is because HTS’ interest in military and combat training has waned as the group has been mainly focusing on managing the areas under its control to achieve financial gains through the crossings. Moreover, senior HTS leaders defected from the group’s Salafi current close to al-Qaeda, which has been the most important source of power for HTS.”

Hamid said HTS is strengthening its authority and imposing a fait accompli in its areas of control by focusing on the security level and preventing operations by the Islamic State cells. “HTS is also focusing on developing financial and economic capabilities by granting investors and business entrepreneurs special privileges and trying to link their interests to it and to Golani personally. Also, HTS has reorganized its ranks and expelled leaders who are not loyal to Golani. It replaced them with other leaders and cadres, including Sharia scholars, media figures, economists and administrative, health and educational cadres.”

Golani had previously threatened the FSA factions that HTS would enter their areas. The threats came during a meeting with displaced civilians from several areas of Aleppo in August 2021. “The people in the Euphrates Shield and Olive Branch areas, northeast of Aleppo, controlled by the opposition [Syria National Army] are demanding HTS to enter their areas,” Golani said at the meeting.