Sources in the Syrian opposition have revealed contacts between Hayat Tahrir al-Sham and some of the Turkish-allied Free Syrian Army factions on security of the areas under the control of the FSA. 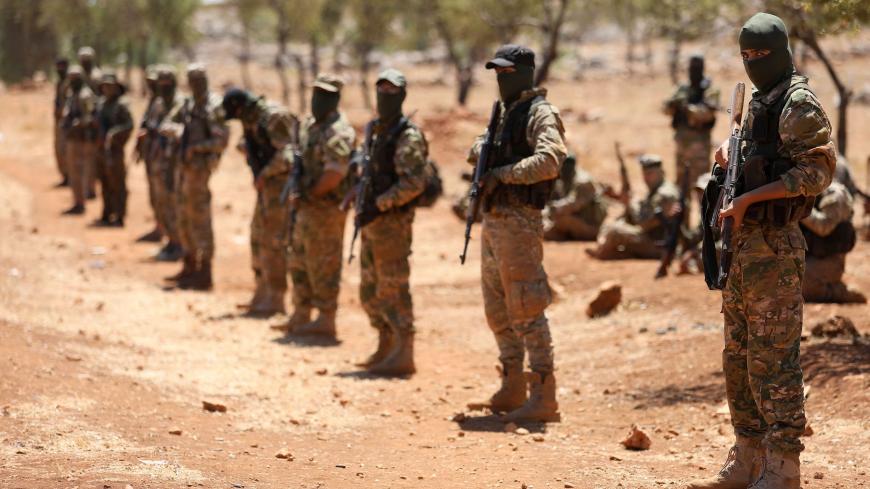 Syrian fighters attend a mock battle in anticipation of an attack by the regime on Idlib province and the surrounding countryside during the graduation ceremony for new Hayat Tahrir al-Sham members at a camp in the countryside of the northern Idlib province on Aug. 14, 2018. - OMAR HAJ KADOUR/AFP via Getty Images

Syrian opposition sources have revealed that contacts are taking place between Hayat Tahrir al-Sham (HTS) and the Free Syrian Army (FSA) factions in north Syria to hand over the security of some areas to HTS. The rumored deal would involve the Turkish-backed FSA tampering down some of its rhetoric against HTS in exchange for allowing the extremist group to oversee security in certain areas. It's unclear if the FSA would maintain forces in the areas in which the HTS takes control of.

Brig. Gen. Ahmad Rahal, who defected from the Syrian regime, tweeted Feb. 19, “HTS emirs have repeatedly visited the Olive Branch areas to work out their relations with FSA leaders amid reports whereby the FSA has decided to prevent any media attacks against HTS leaders. There are also talks that the security of all liberated areas will be handed over to HTS after the failure of the military, security and judicial leadership there.”

HTS, which the United States classifies as a terrorist organization, controls large areas of Idlib in northwest Syria, while the FSA factions, supported by Turkey, control Afrin, al-Bab, Jarablus and Tell Abyad, among others. These areas held by the FSA are known as the Euphrates Shield, Olive Branch and Peace Spring areas, in reference to past military operations led by Turkey and its FSA allies in north Syria.

FSA sources told Al-Monitor on condition of anonymity that there are contacts between HTS and some FSA factions in efforts to resolve disputes between the two sides. The FSA and HTS compete over areas of influence in northern Syria, and there have been several armed conflicts between the two in recent years.

Tensions run high as HTS accuses FSA factions of working for the interests of Turkey at the expense of the Syrian revolution. For their part, FSA factions claim HTS took control of the weapons they left behind in Idlib after they were forced to leave following battles with HTS. The factions also accuse HTS of having a jihadist ideology that undermines the goals of the Syrian revolution.

The sources said that HTS sent specific leaders who are friendlier with the FSA factions to the areas under the control of the Suleiman Shah Brigade in Sheikh Hadid in the countryside of Afrin. Al-Monitor could not independently verify these claims.

Each faction within the FSA often acts without referring to the FSA leadership, and has authority over its members and areas that it controls. It's unclear whether the broader leadership — and its main backer, Turkey — would support such a move. Ankara has designated HTS a terrorist group and works with Russia to oust its forces from Idlib.

Despite being unofficial, the visit points to efforts by HTS and the FSA factions to reach an understanding. A rapprochement could eventually lead to the unification of the Syrian opposition areas, according to the sources.

It appears this is the first time such contacts have taken place.

Citizen journalist Qais al-Ahmad al-Hamwi, who resides in the FSA areas, told Al-Monitor, “The HTS leadership is full of surprises. It is quite easy for it to change its approach and principles. HTS supported the Islamic State but then turned against it and pledged allegiance to al-Qaeda in order to win over a large number of jihadists. It subsequently left al-Qaeda and operated as a local jihadist faction called Fatah al-Sham until it took its current HTS form and fought the FSA factions under pretexts such as spreading evil on earth, dealing with foreign countries and parties and collaborating with Turkey, among others.”

He added, “With regard to coordination with the FSA factions in the Olive Branch and the Euphrates Shield areas, HTS may try to portray itself as a national faction that has nothing to do with terrorism and does not seek expansion beyond Syria. However, I do not think HTS is tolerated by the Syrian revolution factions.”

HTS’ media coordinator Taqi al-Din Omar would neither confirm nor deny the rumored contacts. He told Al-Monitor, “Unity among the ranks of the Syrian revolution factions as well as the preservation of principles and foundations is a revolutionary duty, which is why HTS unified major factions and military battalions in 2017 [when the group was formed]. We have always called for this revolutionary duty with the participation of elites, scholars and cadres of the revolution. The [President Bashar] al-Assad regime summoned the Russian occupier and dozens of militias to fight the Syrian people. The factions’ duty is to unite against the occupiers. I do not think there is a single revolutionary who does not wish for the unification of the liberated areas, i.e. the Syrian opposition areas, without division, as well as for the unification of the revolutionary ranks to confront the challenges and plots being hatched against the revolution of freedom and dignity.”

Abu Khaled al-Shami, a pseudonym for a former jihadist leader residing in Idlib, told Al-Monitor, “There are no assurances that such contacts have indeed taken place between HTS and the FSA. Should this be true, then it would be needless to say that rapprochement is urgent for HTS to break its isolation. … However, whether such efforts will come to fruition depends on how satisfied the Turkish side and the factions it supports are.”

Mustafa Sejari, the political director of the FSA-affiliated Mutasim Brigade who resides in the northern countryside of Aleppo, told Al-Monitor, “The [FSA] position on HTS is firm. HTS is an unreliable organization and all its activities and movements are suspicious. It has been attacking the Syrian revolution’s flank and has wiped out more than 20 factions of the FSA. At the leadership level, the Mutasim Brigade has no contact with HTS, and there has been no decision to get into contact with it. HTS must make real reconsiderations if it is to seek reconciliation with the Syrian people and the military forces, and it must acknowledge what it has committed against the revolution and the factions, while taking the initiative to restore people's rights and end its aggressive behavior.”

Al-Monitor also met with Mohammed al-Omar, a reporter close to HTS residing in Idlib, who said, “HTS is keen on the unity of the opposition areas and is seeking unification, but the factions do not want to unify the region, as the current reality serves their interests. Each faction is like a state enjoying authoritarian and economic privileges, which is why they are not considering unifying the areas. In the meantime, HTS is operating like a legitimate government while maintaining security in the areas under its control. If HTS were in control of the FSA-held areas, it would have prevented the numerous [attacks] there in the past months.”