Exhausted Syrians call for removal of crossings in opposition-controlled areas

Crossings between the areas under the control of Hayat Tahrir al-Sham and the Turkish-allied FSA factions are a burden on civilians, who feel like they are traveling from one state to another. 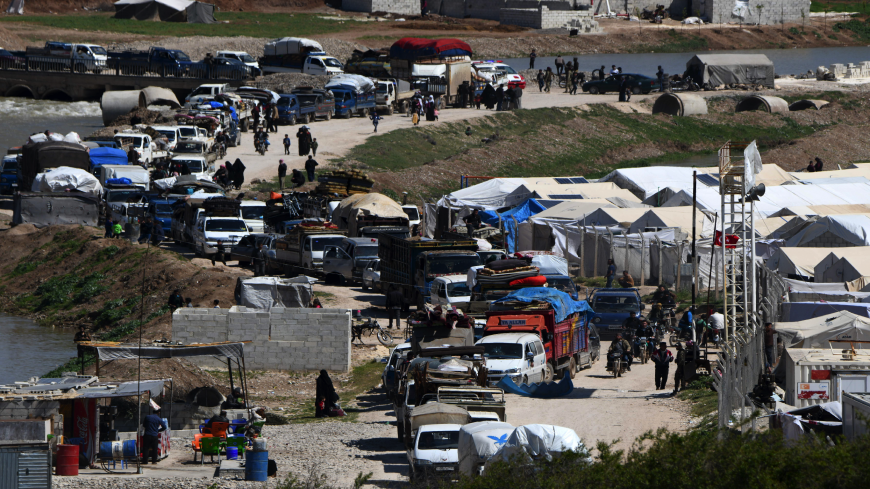 A long convoy of vehicles carrying displaced Syrians drives toward the Deir al-Ballut checkpoint, which has reopened to allow civilians who had fled pro-regime strikes to the Aleppo province near the Turkish border to return to their homes, on April 11, 2020. - RAMI AL SAYED/AFP via Getty Images

IDLIB, Syria — Syrians are finding it hard to move around in northwest Syria, where Hayat Tahrir al-Sham (HTS) and Turkish-backed opposition factions control the crossings linking the areas in Idlib and the western countryside of Aleppo, and the Olive Branch and Euphrates Shield areas.

The Deir Ballut crossing is located between Atma in northern Idlib, which is under the control of HTS, and Deir Ballut in the southern countryside of Afrin, under control of the Free Syrian Army (FSA) factions.

The Ghazawiya crossing is located between the town of Darat Azza in the HTS-controlled western countryside of Aleppo and the Afrin area where the FSA is in control.

Syrian activists have often called on the Syrian opposition factions to remove the crossings between opposition areas, as they hinder the movement of civilians and increase division between the factions.

In this context, media activist Mahmoud al-Bakor, who lives in the Idlib countryside, told Al-Monitor, “The crossings between the Syrian opposition factions constitute a major obstacle to the movement of civilians and increase the difficulties of their lives. These factions set conditions for civilians that differ according to the controlling faction; for instance, the FSA factions do not accept the license plates granted by the HTS-affiliated Syrian Salvation Government. The inspection mechanism also differs at each crossing, depending on the controlling party. Meanwhile, factions financially benefit from these crossings as they impose taxes on goods. The factions also gain further political control, as these crossings are considered political borders between them.”

He added, “HTS relies heavily on those crossings for the economic income it reaps from the taxes imposed on entering goods, and it uses it to control its areas of influence in Idlib and its countryside, which it considers its own state where it has established the Syrian Salvation Government and controls all the affairs of the area.”

Ahmad continued, “The crossings do not seem as important to the [FSA] factions as much as they are to HTS. The passage of civilians is greatly facilitated [at FSA-controlled crossings], unlike at the crossings controlled by HTS, which is stricter and often carries out arrests there as well as prevents many from entering the Idlib area.”

Saif Abu Omar, the official in charge of the media office of the Sham Legion, which controls the Ghazawiya crossing in the Afrin area, told Al-Monitor, “We do not have crossings; we rather erect checkpoints to facilitate the civilians’ affairs and movement, as well as to maintain security. We do not control crossings; only HTS does. We do not impose taxes, nor do we grant movement permits.”

Meanwhile, Taqi al-Din Omar, head of HTS’ media relations office, told Al-Monitor, “The role of the crossings in northern Syria, much like crossings all around the world, is to facilitate the passage of travelers and protect local production, as well as maintain security and combat smuggling and crime of all kinds, especially in a place abound with cells affiliated with the regime and the Islamic State (IS).”

He added, “The role of these crossings is to control and prosecute people fleeing the judiciary and curb smuggling to and from the regime’s areas. One of their most important tasks is preventing regime and IS cells from entering the Idlib area. This is why we have not had any active cells in Idlib in recent years after dozens of them were arrested at these crossings.”

In reference to HTS, Omar added, “Securing the lives of people and providing the appropriate environment is the responsibility of the existing authority." He added, “Commercial transactions take place according to the conditions stipulated by said authority in order to serve the public interest. A huge number of people pass through these crossings on a daily basis, all within the procedures and measures recognized at any crossing existing between two areas in the world.”

Khaled Hamed, a pseudonym for an activist in Idlib, told Al-Monitor, “Opposition factions have two states: one in Idlib [controlled by HTS] and another in the areas controlled by the Turkish-backed factions. [And even those areas] are each controlled by a different Turkish-baked faction as a state of its own, as each faction gives itself the right to act based on its own personal interest, as an independent state. Meanwhile, HTS has its own state and political borders with the aim of extending control and obtaining financial resources, as they impose taxes on goods and prevent the entry of tobacco into Idlib, which increases its price. It also prevents the entry of potatoes to protect the local production, and the list of banned products is long. Not to mention the list of wanted people whom it arrests at crossings. HTS uses these crossings to impose its control and laws, creating all sorts of difficulties for civilians.”

Khalil al-Moussa, a civilian who lives in the Idlib countryside camps, told Al-Monitor, “I go to Afrin to bring olive leaves and branches; I use the greens to feed my livestock and the wood to keep warm and cook since domestic gas cylinders are expensive here.”

Moussa added, “Because of the crossings, I need to leave my house at 3 a.m. to make it before the congestion. Sometimes cars line up for over 1 kilometer. I try to skip traffic because I need to be back on the same day, but it [often] takes me ages. Although my destination is no more than 20 kilometers away, my journey takes long hours because of the crossings as I am sometimes forced to unload everything at the checkpoints and put it back in my car after inspection. It is exhausting, and like hundreds of other people, I sometimes get delayed and stalled for no reason.” 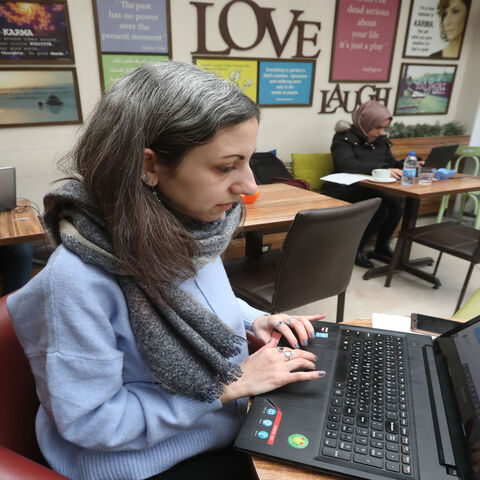