Hayat Tahrir al-Sham has arrested several members of the Sham Legion affiliated with the Turkish-backed Free Syrian Army and the crossing point between north Syrian areas held by the two groups remains closed. 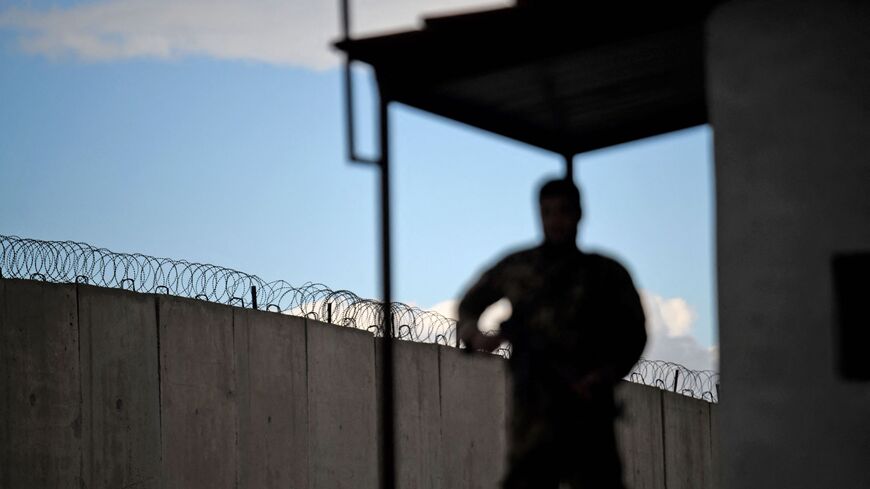 A member of Turkish-backed Free Syrian Army mans a checkpoint near the village of Jindayris in the countryside of Afrin, along the wall on the northern border with Turkey, on Dec. 18, 2021. - RAMI AL SAYED/AFP via Getty Images

On April 15, the FSA-affiliated Sham Legion arrested an HTS member as he tried to enter the Olive Branch area, which is under control of the FSA. In response, HTS arrested 22 members of the Sham Legion who were returning from the HTS-held Idlib area at the Darat Izza-Ghazawiya crossing.

HTS blocked all members of the Sham Legion from passing to and from Idlib until the issue is resolved.

HTS tightened its control over the crossings with the FSA areas during its 2019 military operation against the Nour al-Din al-Zenki Movement, after which it took control of the entire western countryside of Aleppo. HTS also raided the Sham Legion's checkpoints at the crossing and arrested those in charge there.

The Sham Legion sent military reinforcements to the crossing and closed it completely, while similar reinforcements arrived in the Deir Ballut area in the Aleppo countryside.

Meanwhile, forces from the Sham Legion raided a military site in the northern countryside of Aleppo and arrested three HTS fighters.

Tensions remain high and negotiations are ongoing between the two sides to resolve the dispute, release prisoners and reopen the crossing.

Khaled Omran, an HTS leader residing in Idlib, told Al-Monitor, “We do not want to fight the Sham Legion or any other faction. What we did was a reaction to what some Sham Legion members did because they want to disrupt the relationship we have with the faction.”

Omran added, “They arrested an HTS leader and accused him of working with the security apparatus. We are now conducting negotiations to reach a solution and release all detainees from both sides. It is not in HTS’ interest to confront any FSA faction. But such incidents occur on a regular basis between all parties, be it between HTS and FSA factions or between the factions themselves.”

Hashem Semaan, a Sham Legion leader residing in the northern countryside of Aleppo, told Al-Monitor, “HTS is always the one that causes problems with everyone. It recently sent its security forces to monitor some FSA leaders in the northern countryside of Aleppo. What we did is a normal procedure and a suspect was arrested legally. Meanwhile, we expect HTS to crack down on the Sham Legion members … on the lines of contact with the regime in the coming days.”

Semaan stressed that negotiations are underway.

Muhammed al-Sukkeri, an independent researcher residing in Turkey, told Al-Monitor, “Despite the security tensions between HTS and the Sham Legion, relative calm still prevails. The Sham Legion enjoys great Turkish support, and this is due to ideological reasons,” in reference to the Sham Legion's ties with the Muslim Brotherhood as well as the ruling Justice and Development Party in Turkey.

He explained, “HTS does not hide its efforts to gain control of Idlib by targeting the moderate currents opposing it, given the threat they pose in terms of forming an alternative project for the area that Turkey may depend on in the future. Meanwhile, Turkey has always supported the Sham Legion. But HTS was only able to confront this threat now after eliminating all other factions that threatened its control, such as Hurras al-Din and the Nour al-Din al-Zenki Movement.”