Security forces affiliated with Hayat Tahrir al-Sham forced gas stations to close in areas controlled by Turkish-backed factions and set up a temporary checkpoint there. 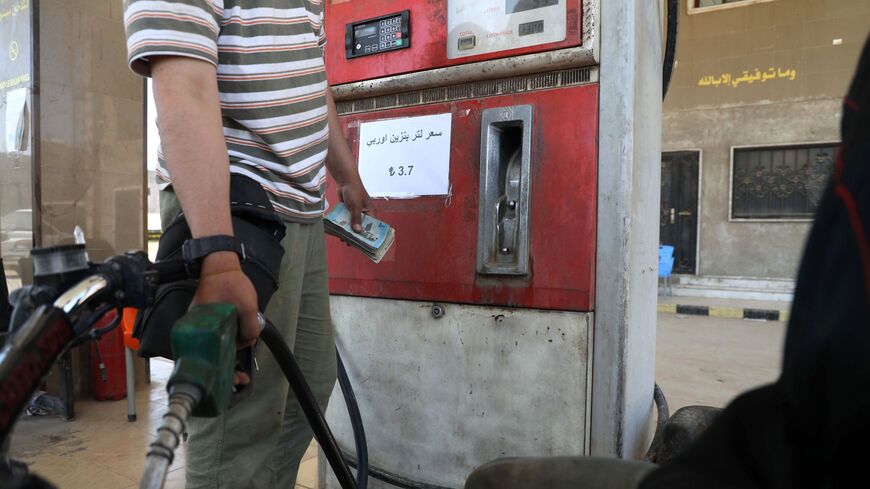 Gasoline prices are displayed in Turkish lira at a gas station in the town of Sarmada in Syria's northwestern Idlib province, on June 15, 2020. - AAREF WATAD/AFP via Getty Images

IDLIB, Syria — Well-informed sources told Al-Monitor that Hayat Tahrir al-Sham’s security apparatus has shut down several gas stations near the Ghazawiya crossing in the western countryside of Aleppo. The crossing separates the HTS-controlled areas in Idlib and the western countryside of Aleppo from and the areas controlled by the Sham Legion, a faction affiliated with the Free Syrian Army.

The sources noted that said gas stations are owned by civilians with ties to the Sham Legion. HTS claims they are not civilians but Sham Legion operatives and that the stations are not licensed by the Salvation Government affiliated with HTS.

Civilians who were stuck at the Ghazawiya crossing, which was closed temporarily, told Al-Monitor, “HTS wants to shut down these gas stations because they sell fuel to civilians at a price lower than the HTS-affiliated Watad company, which monopolizes the sale of fuel in Idlib. Many civilians come to these stations from the HTS-controlled areas, which does not please HTS.”

The Sham Legion’s media office said in a statement, “Some civilian-owned gas stations are located between the HTS crossing and the [Syrian opposition’s] National Front for Liberation (NFL) checkpoint, to which the Sham Legion is affiliated. These stations sell fuel at the approved prices in the northern countryside of Aleppo, which is lower than the prices set by HTS’ Watad company. On Aug. 4, an HTS-affiliated security force, with armored vehicles and machine guns, advanced toward a gas station three kilometers from the NFL checkpoint.”

The statement went on, “HTS arrested the owners of the gas stations and erected a checkpoint at the last gas station near our checkpoint as well as blocked the road. HTS did not coordinate with the NFL in this regard and it is thus considered an infringement on the NFL-controlled areas. This attack aims to stop cars coming from HTS-controlled areas to fuel up here at prices lower than Watad’s.”

The head of the Sham Legion’s media office, Saif al-Raad Abu Omar, who lives in the northern countryside of Aleppo, told Al-Monitor, “What the HTS forces did was a clear and unacceptable transgression, and forces from the Sham Legion were immediately on alert. They set up checkpoints and cut off roads to stop HTS. The matter was then resolved and things returned to normal.”

He added, “The gas stations in this area belong to civilians and not to the NFL, and they sell fuel at the usual price in the northern countryside of Aleppo. This is why their prices are far cheaper than Watad’s in the HTS-controlled areas. HTS shut these stations down for this exact reason.”

Al-Farouk Abu Bakr, a leader of the FSA-affiliated Mutasim Brigade, who lives in the northern countryside of Aleppo, told Al-Monitor, “The real intention behind HTS’ actions is to enter the FSA-controlled areas. But it realizes it will not be easy because the FSA factions will not stand idly by and watch it do whatever it wants. We will confront it with full force. HTS fought against most FSA factions, took their weapons and expelled them from Idlib.”

Abu Bakr added, "HTS is not trying to wage a battle against the Sham Legion, which also has a remarkable presence in the areas controlled by HTS in Idlib.”

Taqi al-Din Omar, the head of HTS’ media office who resides in Idlib, told Al-Monitor, “HTS closed down the gas stations because they were smuggling fuel and selling bad diesel fuel, which greatly harms the general population of the liberated north. HTS sent several warnings to these stations but they ignored them, prompting HTS to shut them down, especially after several complaints were filed against them. The concerned authorities in the liberated areas seek to protect and preserve the quality of basic materials and fight fraud and smuggling.”

Activist Qais al-Ahmed, who resides in the northern countryside of Aleppo, told Al-Monitor, “HTS wants to get rid of the gas stations near its crossing with the [opposition] factions, to sell the fuel it monopolizes through its company Watad.”

Ahmed noted, “However, HTS is not currently interested in fighting the Turkish-backed factions. Rather, it communicates with these factions through mediators to achieve rapprochement, especially with the Sham Legion, which it considers an ally. HTS has fought many factions but not the Sham Legion, which it needs to secure ammunition. What HTS recently did was just a maneuver targeting its economic competitors.”