The recent advances made by the al-Qaeda-linked Hayat Tahrir al-Sham in Aleppo’s western countryside and Idlib might pave the way for a regime attack in the area under the pretext of eliminating jihadist groups. 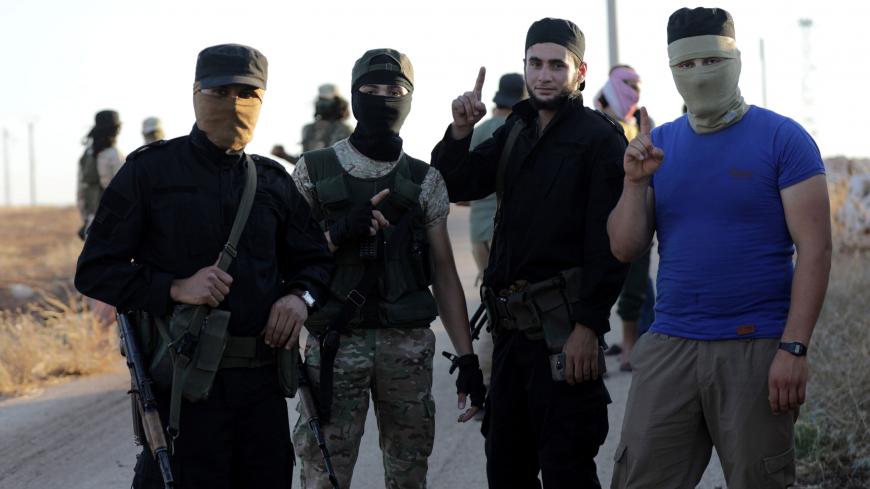 Islamist rebels from Hayat Tahrir al-Sham are seen outside the villages of al-Foua and Kefraya, northeast of Idlib, Syria, July 18, 2018. - REUTERS/Khalil Ashawi

These events might threaten the implementation of the Astana agreement between Turkey, Russia and Iran and impact stability in Idlib. Meanwhile, HTS’ advances are impeding the efforts of Turkish-backed factions, which are preparing for an offensive against the US-backed Syrian Democratic Forces (SDF) east of the Euphrates River in northeastern Syria.

The FSA believes that HTS' actions in Idlib and Aleppo’s western countryside benefit the Syrian regime and its allies and weaken the Turkish position. The official spokesperson for the FSA-affiliated National Army in Aleppo’s countryside, Maj. Yusuf Hamoud, accused HTS (formerly known as Jabhat al-Nusra) of obstructing the FSA factions’ efforts to prepare for the East Euphrates battle against the SDF.

Hamoud told Al-Monitor, “HTS attacked FSA locations in Aleppo’s western countryside, Idlib and Hama’s western countryside between Jan. 1 and 9, 2019. HTS succeeded in controlling wide stretches that were in the grip of the factions. HTS’ advances serve the regime and its allies, Russia and Iran, harm the interests of the FSA and impede our efforts and those of our Turkish allies to clean the Eastern Euphrates areas from the SDF.”

He added, “The recent developments in the western countryside of Aleppo and Idlib in the past few days shifted our military interest toward the battles and the expansion of the HTS at the expense of FSA factions. We think this will serve the regime and Russia, which might wage a wide-scale attack soon on the HTS-controlled areas, under the pretext that HTS is on the terrorism blacklist.”

Hamoud noted, “We will not stand idle if the regime and its allies decide to take advantage of the HTS expansion in Idlib to wage a battle to control the area. When they tried to launch a battle to control Idlib three months ago, they failed, because the US and Europe — mainly Germany, France and Turkey — opposed the decision. But now, the regime and its allies have an excuse they might capitalize on. Meanwhile, our preparations for the eastern Euphrates battle are ongoing, and the situation in Idlib will not affect our efforts with our Turkish allies.”

FSA-affiliated National Army factions clashed with HTS members Jan. 9 near the camps of the displaced in Atme in northwest Idlib. Atme is adjacent to Afrin, where the FSA are deployed. Militants from both sides were killed in the clashes and others, including civilians, were wounded.

The areas that the HTS targeted Jan. 1 were under the control of Nour al-Din al-Zenki Movement, a faction of the FSA-affiliated National Front for Liberation. The battles lasted four days, during which HTS seized all the locations of the movement and expelled its fighters to Afrin under an agreement signed Jan. 5.

On Jan. 2, the FSA-affiliated National Army positioned in Afrin and the Euphrates Shield area in Aleppo countryside sent reinforcements to Aleppo’s western countryside to confront HTS. But the reinforcements were not sufficient to counter the violent attack. HTS continued advancing and took control of Atareb Jan. 6, as per the Jan. 5 agreement with the city’s leadership and the FSA factions.

On Jan. 7, the National Army tried to form a military operations chamber in northern Aleppo to fight the HTS there and in Idlib, but could not deter the HTS attacks. On Jan. 9, the HTS took control of the Al-Ghab Plain areas in Hama's northwestern countryside and Idlib’s southern countryside after battles against Ahrar al-Sham, which is affiliated with the FSA. The battles ended with a Jan. 10 agreement that called for disbanding Ahrar al-Sham and placing the area under the control of HTS.

HTS reached an agreement with the Sham Falcons and Ahrar al-Sham, both under the FSA-affiliated National Front for Liberation in Idlib. The area now falls under the administrative control of the Syrian Salvation Government, which is affiliated with the HTS. The agreement also stipulated an immediate cease-fire and removal of military barricades, in addition to a prisoner exchange. The agreement ensured HTS' control over Idlib.

A military opposition source told Al-Monitor on condition of anonymity that Turkey pressured HTS Jan. 10 and forced it to stop the fighting. At the same time, Turkey forced the FSA factions affiliated with the National Front for Liberation to halt fighting and sign a cease-fire on the threat of Turkish intervention. According to the source, HTS and the FSA succumbed to Turkish pressure.

Hussein Nasser, director of the Syrian Counter-Extremism Center, told Al-Monitor, “The FSA factions … could have stopped the expansion of HTS if they were willing. Unfortunately, they will pay the price of their weak action.”

He added, “HTS benefitted from the factions’ preoccupation with preparing for the potential Eastern Euphrates battle against SDF. We hope the regime and its allies will not exploit the recent developments and attack the opposition-held territories in Idlib. If this happens, the Astana Agreement between Iran, Russia and Turkey will likely collapse.”