Is Turkey losing ground in Idlib?

An offensive by Hayat Tahrir al-Sham in the western Aleppo countryside has forced the Turkey-backed National Liberation Front to retreat. 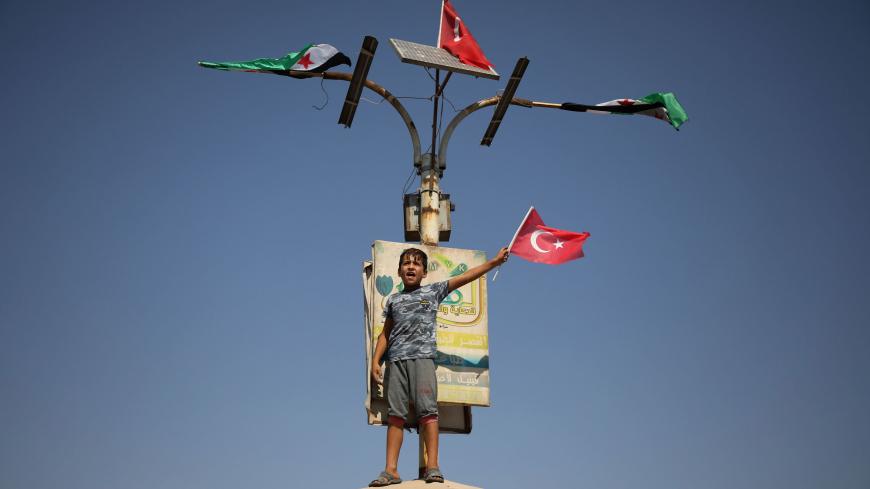 AFRIN, Syria — Hayat Tahrir al-Sham (HTS), led by al-Qaeda's former Syria affiliate, has sealed its grip over most of Idlib province and parts of the neighboring provinces of Aleppo and Hama.

A cease-fire deal was reached Jan. 10 in Idlib between HTS and its rebel rival, the Turkey-backed National Liberation Front (NLF). The deal ended the battle and established the administrative control of the self-proclaimed Salvation Government — the administrative arm of HTS — in all areas previously controlled by the NLF.

Seated in Idlib, the HTS-dominated Syrian Salvation Government was formed in 2017 as an alternative to the opposition's Syrian Interim Government. It represents the civil authority of HTS and administers large parts of Idlib. In addition to this administrative gain, HTS was able to strengthen its military control and expel the NLF from the front's main strongholds in Idlib and the western Aleppo countryside

HTS is an alliance of Salafi-jihadi factions led by Jabhat al-Nusra, a former branch of al-Qaeda. It is deployed in the province of Idlib and the nearby countryside of Aleppo and countryside of Hama. The NLF was also deployed in this area. It is a coalition of several opposition factions supported by Turkey and includes, mainly, Failaq al-Sham, Ahrar al-Sham and Nureddin Zengi Brigade.

From Jan. 1 to 10, HTS launched a widescale offensive against NLF-controlled areas from various fronts, defeating the NLF in Idlib. Clashes had flared up in western Aleppo province when HTS accused the rebel Nureddin Zengi Brigade of killing five of its members.

Al-Monitor headed to the town of al-Ghazzawiya, 16 kilometers south of Afrin city, on Jan. 9, a day before the cease-fire. The National Army, the main Turkish-backed rebel force — which fought HTS alongside the NLF — was reinforcing its presence along the confrontation line with HTS. National Army personnel had set up checkpoints and guard posts, while vehicles fitted with heavy machine guns patrolled the town streets.

“We have reinforced our positions in the area and dispatched more fighters to the confrontation line in anticipation of any moves or attack by HTS against us,” a National Army field commander told Al-Monitor on condition of anonymity. “We are concerned about this expansion by HTS, classified as a terrorist group. We will put an end to this expansion, which could harm the region and its population.”

The National Army is estimated to have 35,000 fighters deployed in Afrin and the Euphrates Shield areas. National Army-affiliated groups moved on Jan. 4 to the western part of Aleppo to support the NLF, but this limited movement was confined to groups of fighters hailing from areas attacked by HTS.

This was confirmed by the spokesman of the National Army, Maj. Yusuf Hamoud, in a tweet Jan. 2. Hamoud added that his army is on the verge of a battle against terrorism in Manbij and the eastern Euphrates.

The Nureddin Zengi Brigade is not only a main component of the NLF but is also the local force in the western Aleppo countryside.

HTS deployed its elite fighters in its war against the Nureddin Zengi Brigade. This elite group consists of Jaysh al-Badia Army and al-Asaib al-Hamra forces. On Jan. 1, HTS controlled the strategic hill of Jabal al-Sheikh Barakat. Soon after, it seized all of Aleppo’s western countryside, including 17 villages and cities, most notably Dar Azza, and Atareb.

Ousting the Nureddin Zengi Brigade and extending its reach over most of Idlib province are accomplishments for HTS. This victory allows it to maintain control of all the humanitarian and commercial crossings between the province of Idlib and the regime-held areas. The Nureddin Zengi Brigade controlled the last of these crossings, the Mansoura crossing. Of course, HTS controls the Bab al-Hawa crossing, the only one with Turkey in Idlib province.

These rapid defeats by the NLF reveal its fragmentation. Its constituent factions did not act collectively against HTS. Although the NLF’s leadership issued a statement Jan. 2 sounding a clarion call and requesting all of its components to deter HTS’ attack, some NLF brigades and groups refrained from fighting and said they would remain stationed at the confrontation line with the Syrian regime only.

It seems HTS is trying to impose itself as a de facto power, forcing regional powers, especially Ankara — which has 12 military observation posts in Idlib — to deal with it as the most powerful opposition force in Idlib.

On Jan. 9, Turkish Defense Minister Hulusi Akar discussed with his Russian counterpart Sergei Shoigu recent developments in Idlib province and regional security issues within the framework of the Sochi agreement.

Following threats by the Syrian regime to invade Idlib, Turkey and Russia had reached an agreement in October 2018 to set up a de-escalation zone in Idlib at a depth of 15-20 kilometers. Both Russia and Turkey repeatedly emphasized their determination to combat all forms of terrorism in Syria.