Factions pulling out of the recently formed Syrian Liberation Front raise questions about the future of Turkish-backed rebel groups. 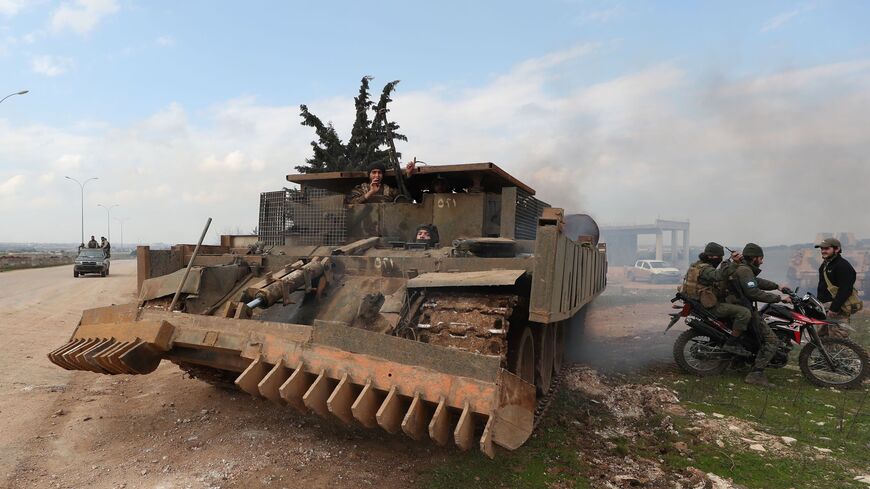 Members of the Syrian National Army, an alliance of Turkey-backed rebel groups, ride in a tracked vehicle modified as a bulldozer in the town of Sarmin, about 8 kilometers southeast of the city of Idlib in northwestern Syria, on Feb. 24, 2020. - OMAR HAJ KADOUR/AFP via Getty Images

IDLIB — Sources close to Sultan Soleman Shah Brigade, one of the largest factions of the Syrian Liberation Front, said that the brigade has effectively withdrawn from the front to join the Thaeeroun Movement of Azm Operations Room.

The front designated Mutasim al-Abbas as leader in early September, but he defected along with the Suqur al-Shamal Brigade and Division 20. As a result, the front started to break up. But since those two factions did not have many members, their defection was less impactful than that of Sultan Soleman Shah Brigade, which counts many experienced fighters and ammunition.

Azm Operations Room is formed by a number of factions in the Syrian National Army, which started with the Levant Front and Sultan Murad divisions, and then were joined by Ahrar al-Sharqiya and Malakshah divisions, Jaish al-Islam, Jaish al-Sharqiya, and Suqur al-Shamal Brigade.

“The project of the Syrian Liberation Front is based on the complete integration of five factions," Mohammad Sarmini, the Turkey-based head of the Jusoor Center for Studies, told Al-Monitor, "and therefore the bulk of the front disintegrated, as three factions left." What happens next, he said, depends on whether the last two factions can integrate.

He added, “Perhaps the most important reason for the three factions’ defection from the front is their feeling that Al-Mu'tasim and Al-Hamza Divisions are controlling the project and its main offices, as well as the lack of readiness of these factions for full integration. They feel it is better for them to remain in their own turf or to join operation rooms.”

He stressed that the possible causes of strain among those remaining in the front are the difficult requirements for full integration on both sides, such as Al-Hamza Division's greater number of men as opposed to Al-Mu’tasim Division’s higher level of organization and discipline.

However, the difficulty of integrating does not mean they will easily abandon the project. The familial and regional balances between the Levant Front and Al-Mu’tasim Division inside Marea are among the most important reasons for Al-Mu’tasim Division’s adherence to the front’s project. Concerns about the alliance between the Levant Front and the Sultan Murad Division are the biggest security motive pushing Al-Hamza Division to hold on.

Factionalism remains a major stumbling block. Sarmini noted that the Azm Operations Room and the National Liberation Front "took sufficient time for convergence and understandings on various issues without the presence of great pressure or threats pushing to rapid integration. …These alliances are based on uniting under operating rooms where coordination develops in a logical and gradual manner; creating a suitable atmosphere for partial or major mergers in advanced stages.”

He pointed out that, through the alliances and mergers, the factions want to protect themselves and their interests, and therefore the failure of integration often benefits other alliances. Unfortunately, stability in the liberated areas still depends on the fate of these alliances. Failure to organize and lack of security coordination creates loopholes from which the Syrian Democratic Forces and the regime benefit.

“It is impossible to be certain that the Syrian Liberation Front is on the verge of disintegration, despite the large withdrawals that have occurred," independent researcher Muhammad El-Sukkeri, who resides in Turkey, told Al-Monitor. "But, the importance of the front cannot be measured only in terms of the number of factions that remained, but also in their weight, such as Al-Hamza and Al-Mu'tasim Divisions, which constitute the weight of the front. The fact that these blocs remain coherent may keep the front's project in place."

Sukkeri does not think the Azm Operations Room is on the verge of disintegration, "especially since it has become a good polarizing environment for the factions withdrawing from the front. Therefore, Azm has to develop its work mechanisms in order to ensure survival and sustainability in terms of not rushing into total factional integration and merger.”

The Syrian regime is the one that would benefit from the disintegration among the National Army alliances, as it counts on factional chaos. Hayaat Tahrir al-Sham (HTS) considers itself a coherent and united bloc, consequently, its project is a rival of the National Army’s project, which it wants to fail.