The Free Syrian Army is conducting intense training in Aleppo’s countryside in preparation for future battles now that Turkey has announced the end of its operation in Syria. 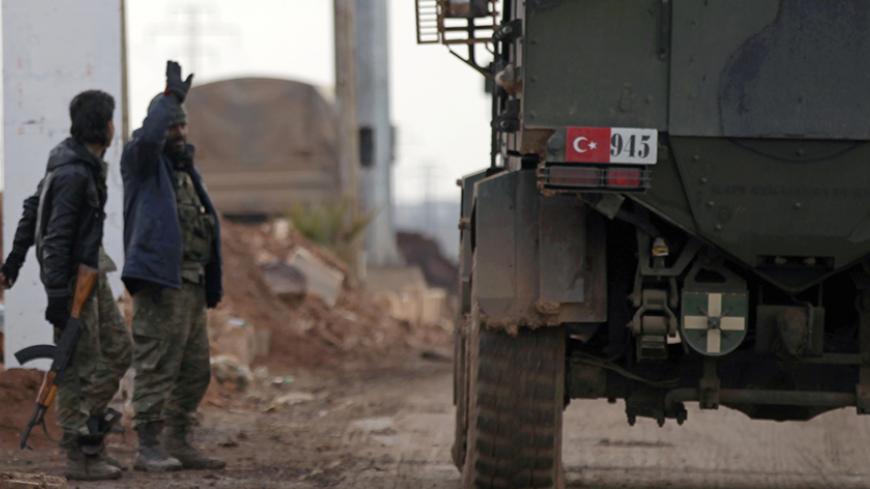 The FSA factions established new training camps in Aleppo’s countryside, near the Turkish border, to include the large number of fighters who recently joined in, in addition to the senior fighters who have been fighting within FSA ranks for some time now. The camps include courses on the use of various types of weapons and physical fitness training.

The FSA factions in Aleppo’s countryside started training the new fighters early this year. This training coincided with the military operations the FSA was conducting against the Islamic State (IS), with the support of Turkish forces under Ankara’s Operation Euphrates Shield, which was launched on Aug. 24, 2016.

Although FSA fighters joined training camps in the past, the new camps offer more organized training, as the FSA now has more time on its hands to train a large number of fighters since Turkey announced the end of its operation in Syria. The training operations began intensifying on April 1, and internal training camps were set up near the Syrian-Turkish border. A batch of about 50 newly recruited fighters affiliated with al-Hamza Brigade graduated from the brigade’s training camp near the city of Azaz in northwestern Syria on April 15. They received training on the use of light weapons only, as the training aimed at increasing the number of fighters within its ranks.

Mahmoud Suleiman, the commander of the Sultan Muhammad al-Fatah Brigade affiliated with the FSA, told Al-Monitor, “Turkey’s announcement of the end of Operation Euphrates Shield after achieving its main goal to expel IS from Aleppo’s countryside was a golden opportunity [for us] to develop the capacities of all our fighters on the use of various types of weapons, including light, medium and heavy weapons. [We] also sought to raise the level of physical fitness among our fighters so they are better equipped to fight organized battles in the future.”

He added, “About 400 fighters out of the senior combatants of the Sultan Muhammad al-Fatah Brigade are currently undergoing intensive training in an internal camp near the Turkish border in Aleppo’s countryside. The batch, which started its training on April 1, will graduate on April 20. It will be followed by another round of training that will include all the members of the brigade to prepare them for the upcoming stage.”

Suleiman further noted, “Officers from the Turkish special forces and Syrian officers of various ranks who defected from [Bashar] al-Assad’s regime [army] supervised the training courses that were centered on the use of light weapons provided by Turkey as part of its support to the brigade and other factions, such as Muntasir Billah Brigade, Samarkand Brigade, Liwa al-Ahfad, 103rd Brigade and the 105th Brigade. The members of all of these factions are currently undergoing similar training in Aleppo’s countryside.”

He added that the main objective behind the training of his brigade is to build an organized army tasked with liberating Syria from all terrorist organizations, by including a large number of defected Syrian officers who share their experience continuously with the trainees. “The 51st Brigade is one of the factions backed by the United States under a training program provided by the Pentagon,” Afisi said.

The US Defense Department provides financial aid and weapons and ammunition to three military factions affiliated with the FSA in Aleppo’s countryside that also fought under Operation Euphrates Shield. These factions are al-Mu'tasim Brigade, al-Hamza Brigade and the 51st Brigade.

Other factions relied on their own capabilities to train their fighters. The Sultan Murad Division is currently training 100 fighters in a camp near the Turkish border, according to the division’s leader, Col. Ahmed al-Othman. He told Al-Monitor, “The post-Operation Euphrates Shield stage is an important pillar for the FSA factions that fought a fierce battle against IS in the past few months. This stage allows [us] to raise the combat skills of fighters and introduce them to modern fighting techniques, using all types of weapons. [This stage] also aims at eliminating weaknesses and gaps the fighters suffered from during the previous battles.”

Al-Mu'tasim Brigade, affiliated with the FSA and based in Aleppo’s countryside, is also among the factions that started training its fighters after the end of the Turkish-led military operation. The brigade, backed by the United States under the Pentagon’s training program, benefitted from defected Syrian officers who have high skills in military training, according to Capt. Anis Haj, the commander of al-Mu'tasim Brigade’s training camp near the city of Marea.

Haj told Al-Monitor, “A batch of 100 fighters graduated on April 12 after completing their training on the use of all types of heavy and light weapons. They also underwent severe physical training to improve their physical fitness.”

He further said, “We, as al-Mu’tasim Brigade, are seeking to increase the number of our fighters in the future, and the door to join the brigade is now open. The brigade currently includes about 1,000 fighters, and we are seeking to include another 1,000 fighters. The new recruits will undergo military training at the brigades’ camp, where they will learn single combat skills and the use of all types of weapons available, like mortars and light and medium machine guns.”

“The FSA internal training camps come in preparation for the next military battles the FSA will lead against terrorist organizations, which include Assad’s regime and its supporting militias, and IS. The next battle may be in Raqqa, but for now, the FSA factions have not been informed of the next location. For the moment, the factions are focused on training and organization. A new batch of 100 fighters from al-Mu’tasim Brigade will join the camp in the next few days,” Haj said.

Each faction affiliated with the FSA has its own training camp in Aleppo’s countryside, amounting to more than 12 such camps near the Turkish border and spread from the town of Azaz in the west to al-Rai in the east. Through the intensified trainings, it seems the FSA is preparing to participate in the Raqqa battle. The FSA believes the United States will soon ask them to participate in this battle, which has become extremely complicated and difficult.