IS reinforces positions in Syria's al-Bab

The Free Syrian Army, backed by Turkish forces, is facing major difficulties in their battles against the Islamic State near al-Bab in northern Aleppo, where IS is reinforcing its positions and besieging civilians they use as human shields. 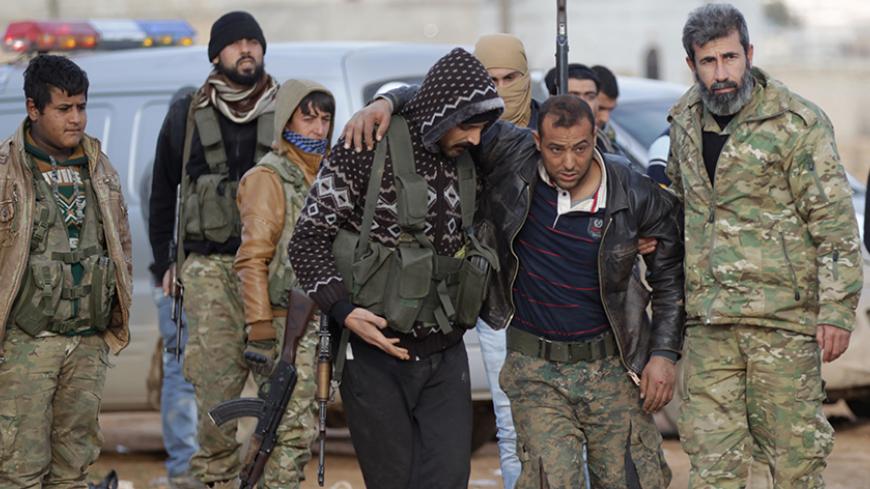 Free Syrian Army fighters help a fellow fighter injured by what they said was a mine near Qabasin during an offensive against Islamic State fighters to take control of the town, near the northern Syrian town of al-Bab, Syria, Jan. 12, 2017. - REUTERS/Khalil Ashawi

ALEPPO, Syria — Military operations are ongoing near al-Bab, northeast of Aleppo, between the Free Syrian Army (FSA) factions and special Turkish forces on the one hand, and the Islamic State (IS) on the other. The battles that the armed Syrian opposition is waging with Turkish air and land support in the framework of Operation Euphrates Shield that Turkey launched on Aug. 24 face major challenges against IS. The organization is defending, ever so strongly, its main stronghold in the Aleppo countryside.

Al-Monitor accompanied FSA soldiers participating in the battle and closely watched the progress of the military operation that has been faltering for many reasons.

For one, bad weather conditions were far from helpful. Besides, IS’ strong resistance in al-Bab — which the organization considers an important hub for moving men and military equipment — did not make the battle any easier. The strong presence of civilians in the city also complicated the operation, as IS forbade them from leaving the city and is using them as human shields.

IS has also benefited from defenses it has built and planted around the city, such as tunnels and trenches and the sowing of mines of varying sizes and types. Some mines are anti-personnel, while others target armored and four-wheel drive vehicles. Euphrates Shield fighters lost many of their vehicles and men during IS’ ongoing raid attempts. Notably, IS relies on car bombings and motorcycle suicide attacks. A car bombing targeting Euphrates Shield recently occurred in Jubb al-Barazi near al-Bab and killed seven people, including two civilians.

During Al-Monitor’s field visit to Operation Euphrates Shield battlefronts near al-Bab, FSA leader Mohammed Haj Ali told Al-Monitor, “Despite our repeated attempts to raid al-Bab city and open new battlefronts against IS, we have failed so far in breaking the organization’s defenses and its front lines surrounding the city from the north and west. We changed our military tactics several times by attacking Qabasin, Suflania and Bizaah towns in the east and northeast of al-Bab. The battles are ongoing on these axes to pave the way for besieging al-Bab and threatening it from the east, at the same time as the land attacks in the west and north.”

He said, “Turkish air raids against IS locations, ammunition warehouses and military headquarters in al-Bab and its surroundings have increased lately. The Turkish tanks have also been increasingly targeting IS locations, but the shelling did not really weaken the organization, which is maintaining its fierce defense. IS has large amounts of weapons and ammunition, including anti-tank missiles.”

Ali added, “IS has many local fighters in al-Bab and its surroundings, in addition to hundreds of foreign members who came to the aid of their fellows in the battles to deter Operation Euphrates Shield. IS has a remarkable amount of heavy weapons and ammunition and is using them in al-Bab battle. Perhaps those are part of its spoils of war in Palmyra city.”

In an interview with Al-Monitor, Mustafa Sejari, the head of the political bureau of Al-Mu’tasim Brigade, which is affiliated with the FSA, said, “The battles on the outskirts of al-Bab are ongoing, and the FSA factions are trying to weaken IS by striking its defense lines and burdening it with losses. Operation Euphrates Shield forces are expanding the battlefronts against IS to catch the organization off guard in several locations and disperse its military efforts. But the weather in al-Bab was rainy and cloudy almost all the time a month ago, thus impeding the forces’ advance and gains.”

He added, “Due to the large number of civilians in al-Bab, the operation is more difficult. The forces are trying to avoid massacres against civilians as much as possible. Several calls have been made to urge civilians to leave the city, but in vain. IS does not allow them to leave, and civilians are afraid to sneak out through byroads due to mines that the organization had planted in the city’s surroundings and that have killed dozens.”

The head of the Sultan Murad Division affiliated with the FSA, Col. Ahmad al-Othman, told Al-Monitor, “The Turkish army has made new reinforcements in Syria. It has sent [in late December] more than 2,000 soldiers and armored vehicles to support the efforts of Operation Euphrates Shield to control al-Bab and settle the battle. The battles will escalate in the coming days and the forces will enter the city soon. The next target will be Manbij city, which is under the control of the Syrian Democratic Forces [SDF].”

The forces leading Operation Euphrates Shield, which includes FSA factions and special Turkish forces, have been at odds with the SDF, of which the Kurdish People’s Protection Units (YPG) constitute the backbone. Turkish officials consider the SDF a threat to Turkey's security as the organization is an extension of the Kurdistan Workers Party, which Turkey considers a terrorist group. The interests of Turkey and the FSA are similar, as they both fear the SDF’s separatist goals. The YPG has sought to establish an autonomous entity in the Syrian north under the name Rojava.