The Turkish government is working on rehabilitating the Syrian city of al-Bab after the Islamic State’s withdrawal, considering it an arrangement that benefits both sides. 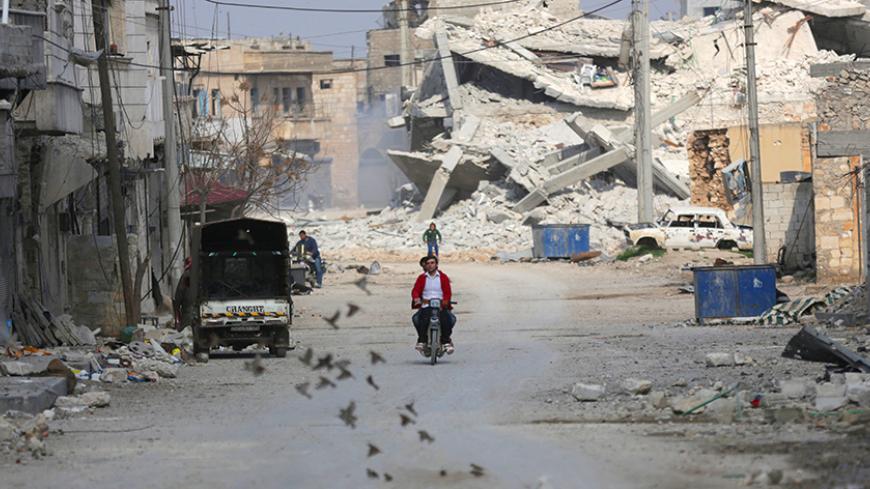 Birds fly up as men ride a motorcycle through a damaged neighborhood in the northern Syrian town of al-Bab, March 4, 2017. - REUTERS/Khalil Ashawi

AL-BAB, Syria — The city of al-Bab, located 38 kilometers (roughly 24 miles) northeast of Aleppo, has come back to life following months of bombings and battles that ended with the Islamic State’s withdrawal Feb. 23. The city subsequently fell under the control of the Turkish-backed Free Syrian Army (FSA) as part of Operation Euphrates Shield launched on Aug. 24.

In a statement April 17, Turkish President Recep Tayyip Erdogan vowed that this operation will not be the first — nor the last — in the region.

There are several FSA checkpoints on the way to al-Bab, and the destruction becomes more evident upon entering the city, where bulldozers and trucks are actively removing the piles of rubble and residents are repairing their properties and homes.

IS insisted on clinging to al-Bab, given its strategic importance; al-Bab, which is densely populated, would provide IS with enough fighters who were recruited after undergoing Sharia training. This led the city to witness continuous fighting from December into February amid heavy Turkish aircraft and artillery bombings, Russian aircraft attacks and raids by the US-led international coalition.

The sounds of motorbikes, a frequently used means of transportation in the city center, are a constant as civil defense members remove rubble from the roads. Abu Kamal sweeps up stones and broken glass in front of his empty shop, of which only shabby shelves remain. While the structure of his shop was not much affected by the shelling, the top floor of his house was. One of the rooms is destroyed and extensive damage has been caused to the building overall.

Abu Kamal told Al-Monitor, “The country is ours and only we can rebuild it.”

He said, “I was displaced to the town of Azaz, 40 kilometers north of Aleppo, where I stayed for four months. Today — and despite all the piled-up rubble — I am happy to be back home.”

Asked about the challenges lying ahead in al-Bab, he said, “Most houses need repairs and many people cannot afford such repairs, especially considering that there are houses that are badly damaged. The lack of water, medical services and generators made many residents hesitate to return to the city."

As the regime has been cutting off the Euphrates River flow to the city ever since it took control of al-Khafsa station March 8, residents have been forced to rely on water tanks filled from wells.

While many shops in city markets had reopened their doors — including wholesale stores, shops selling gas cylinders, pharmacies and bakeries — activity was limited in comparison with the usual commercial and industrial activity, considering that al-Bab is one of the most populous cities in Aleppo province.

There is no accurate census of the current population in al-Bab because of the constant inflow and outflow of people. However, the head of the city's local council, Jamal Osman, estimated that the city now counts more than 50,000 residents, much lower than what it was before IS seized it in January 2014.

The council was established March 7, and it consists of 13 offices overseeing the provision of various services to the city, in coordination with international and local organizations as well as the Turkish government.

Osman said that six wells have been dug and that water is being pumped into them to provide a water supply as a temporary solution to the water crisis and the regime water cuts.

Osman said Al-Hikmah Hospital is being reconstructed and is expected to open in the coming weeks. He said that the Turkish government approved a project to establish a public hospital near the city, and that this hospital will accommodate 200 beds.

The Turkish government is paying close attention to al-Bab, and this is reflected by Turkish official delegations visiting the city on a daily basis to assess the damage and needs and carry out educational, medical and service-related projects. The Turkish government is working on the rehabilitation of nine schools in al-Bab while supplying them with all the necessary books and supplies.

Ahmed Karaz, the director of the city council's educational office, told Al-Monitor that four schools are operating beyond capacity in the city while four others are expected to start operating in the coming weeks.

Turkey believes that al-Bab can serve as a haven for displaced Syrians due to the large residential areas stretching from the city and the towns liberated by Operation Euphrates Shield over an area of 30 square kilometers. In this regard, Turkey’s Gaziantep Mayor Fatma Sahin said in a statement April 6 that she was optimistic that al-Bab would be “cleaned up” from IS, which, she added, would lead to a win-win situation.

“While Syrians will return to their country, we [Turkey] will no longer find terrorists on our borders and the burden of refugees will be alleviated,” she said.

Osman said at least 5,000 Syrians have returned from Turkey and settled in the city of al-Bab.

Osman said the suburb — which will accommodate 80,000 people according to some reports — is likely to be built near Jabal al-Deir, 4 kilometers northeast of al-Bab. He said there are other options that the Turkish government is considering such as the town of Nadah, which is close to al-Rai town to the north of al-Bab.