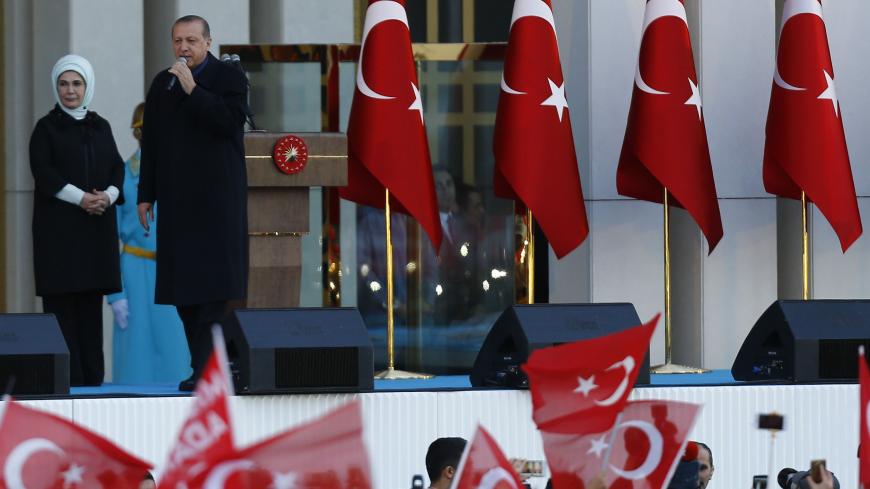 Amberin Zaman reports that US President Donald Trump’s congratulatory call to Turkish President Recep Tayyip Erdogan following the April 16 referendum to give Turkey's presidency greater powers may have only served to heighten differences over US support for the Syrian Kurdish People’s Protection Units (YPG).

The US State Department had been hesitant to congratulate Erdogan on the referendum, according to Zaman, based upon reporting from an observer group from the Organization of Security and Cooperation in Europe (OSCE) and Council of Europe. The group's statement said “fundamental freedoms essential to a genuinely democratic process were curtailed. The dismissal or detention of thousands of citizens negatively affected the political environment.” The head of the delegation from the Parliamentary Assembly of the Council of Europe said, “The referendum did not live up to Council of Europe standards. The legal framework was inadequate for the holding of a genuinely democratic process.”

The Turkish Foreign Ministry slammed the OSCE report as “politically motivated and accusatory” and reflecting a “biased and prejudiced approach.”

Zaman writes, “The prevailing consensus within the administration was that knowing how badly Erdogan wanted Washington’s seal of approval, some concessions could be wrested in exchange, particularly over the bitter differences between Turkey and the United States in the US-led coalition’s campaign in Syria. … But such calculations came to naught when Trump placed the phone call without seeking the State Department’s advice, though Al-Monitor learned from sources familiar with details of the exchange that [US Secretary of State Rex] Tillerson was in the room when the call took place.”

Zaman adds, “A Turkish official speaking to Al-Monitor on strict condition of anonymity denied speculation that Trump’s business partners in Turkey had helped arrange the phone call. Rather, Erdogan’s office had sought the conversation with Trump prior to the referendum and it was agreed in advance that it would take place. … The official described the conversation as ‘very very good’ and confirmed that it was mostly focused on Syria. The official said Erdogan had repeated Turkey’s concerns over the US alliance with the Syrian Kurdish People’s Protection Units (YPG) and had urged they be excluded from a planned offensive to liberate Raqqa.”

In an interview on Al Jazeera two days after the call, Erdogan was optimistic about an improvement in US-Turkey relations under Trump, implying the United States would back off its support for the YPG. “We previously had an agreement on the issue of the PKK [Kurdistan Workers Party],” Erdogan said, according to his official website. “There was also an agreement during Obama’s tenure but Obama unfortunately deceived us over the PYD/YPG. But I don’t believe the current administration will do the same.” The PYD is the Syrian Kurdish Democratic Union Party.

This column in February noted that Erdogan’s hopes for a US turnaround on the YPG may be misguided, given the position of US military leaders. Zaman observes that Erdogan’s hopes may again be misplaced. US Central Command commander Gen. Joseph “Votel and other senior administration officials are said to be pushing Trump to sign an executive dispensation that would authorize the Pentagon to directly arm the YPG and its Arab affiliates who fight under the banner of the Syrian Defense Forces (SDF),” she writes. “While Trump is believed to already be on board with this action, the White House delayed announcing that it was proceeding with the plan until after the Turkish referendum, reportedly because it didn’t want Erdogan to use the issue to whip up anti-Americanism during the campaign. … It remains unclear whether the White House will now wait until Erdogan’s visit before signing. Many analysts say all the prevaricating points to the conflicting goals of defeating IS with the help of the Syrian Kurds without alienating Turkey, a key NATO ally.”

Ibrahim al-Hatlani writes, “Riyadh appears not to have high expectations about rapidly improving ties with Baghdad. A Saudi diplomatic source in Riyadh who spoke to Al-Monitor on condition of anonymity said that the appointment of a new Saudi ambassador to Baghdad is the best that can be expected in the short run. Other issues, such as opening the border, investments and cancellation of debt, cannot be seriously looked at before the Iraqi government gains control over the sectarian militias and their arms and shows that it has the ability to circumscribe Iran's influence in the country.”

Ali Mamouri has written on Iraqi Prime Minister Haider al-Abadi’s efforts to improve ties with Turkey and Saudi Arabia, and this column noted in January that improved Iraqi-Saudi ties “could provide a much-needed spark for an Iran-Saudi dialogue on regional issues.”

Hatlani observes that “the Saudi and Iraqi governments are aware that normal bilateral ties would serve both their interests beyond any advantage to placating the United States’ desire for better relations between its allies. Yet there is not much trust between the two countries. Riyadh, which has no military or political influence in Iraq, is not ready to deal with Baghdad in light of Iraq's sectarian issues and the potential of armed groups smuggling arms to Shiites in Qatif or facilitating the movement of extremists from and into the kingdom to Iran's advantage. That said, Baghdad cannot provide Saudi Arabia the assurances it seeks at the expense of losing its Iranian ally.”

Mohammad al-Khatieb reports that al-Bab “has come back to life” after the defeat of the Islamic State by Turkish-backed armed groups, including the Free Syrian Army, in February.

“The sounds of motorbikes, a frequently used means of transportation in the city center, are a constant as civil defense members remove rubble from the roads,” Khatieb writes. “As the regime has been cutting off the Euphrates River flow to the city ever since it took control of al-Khafsa station March 8, residents have been forced to rely on water tanks filled from wells. … While many shops in city markets had reopened their doors — including wholesale stores, shops selling gas cylinders, pharmacies and bakeries — activity was limited in comparison with the usual commercial and industrial activity, considering that al-Bab is one of the most populous cities in Aleppo province.”

“Turkey believes that al-Bab can serve as a haven for displaced Syrians due to the large residential areas stretching from the city and the towns liberated by Operation Euphrates Shield over an area of 30 square kilometers,” Khatieb reports. “In this regard, Turkey’s Gaziantep Mayor Fatma Sahin said in a statement April 6 that she was optimistic that al-Bab would be “cleaned up” from IS, which, she added, would lead to a win-win situation.”