Even as controversy rages in Turkey, newly empowered President Recep Tayyip Erdogan seems to already be gaining international legitimacy and is making plans to visit Washington for formal talks. 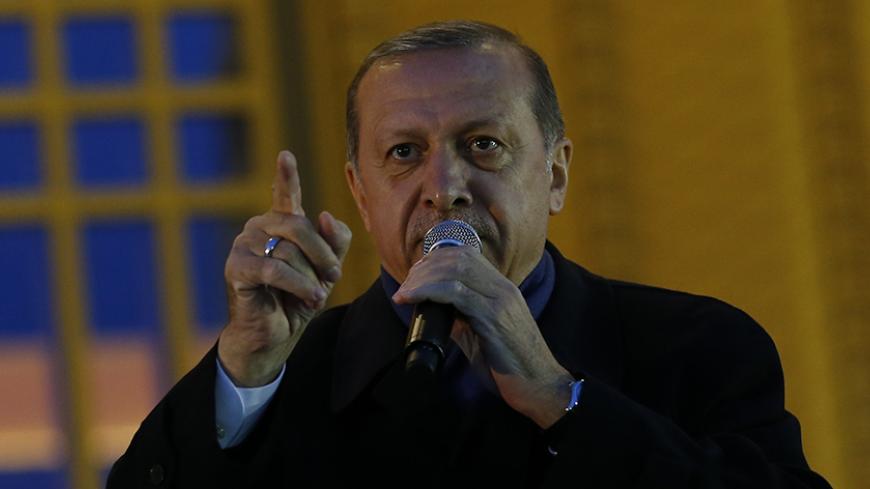 Turkish President Recep Tayyip Erdogan’s push for international legitimacy after narrowly winning a fraud-tainted referendum on expanding the powers of his office is gaining ground, especially in Washington, with unpredictable effects on the ongoing US campaign against the Islamic State.

After receiving a congratulatory telephone call from President Donald Trump on April 17, Erdogan, who has long angled for an invitation to Washington but was quietly rebuffed by the Obama administration, has now apparently gotten that too.

Turkey's foreign minister announced that Erdogan will visit Washington for formal talks with Trump in the coming weeks shortly before they come together with fellow NATO leaders at the organization’s yearly summit that is due to be held in Brussels in late May.

The pro-government Sabah reported, “Details of the meeting between the two presidents were discussed in a phone call between Turkish Foreign Minister Mevlut Cavusoglu and his US counterpart, Rex Tillerson.” However, the White House has yet to confirm that the visit will take place.

An invitation is likely to deepen the controversy swirling around Trump’s telephone call to Erdogan. The move has been widely criticized for taking place just as international monitoring bodies cast doubt over the handling of the referendum.

The Organization for Security and Cooperation in Europe (OSCE), which Turkey invited to monitor the polls, issued a scathing preliminary report pointing among other things to the lack of press freedom, the jailing of thousands of citizens and last-minute changes in counting procedures, all of which created an “unlevel playing field.” The main opposition Republican People’s Party (CHP) has formally demanded an annulment of the vote amid claims of massive ballot stuffing. Initial requests have been denied, and the CHP has vowed to take the matter to Turkey's Constitutional Court or the European Court of Human Rights.

In its first comments on the outcome, the US State Department pointedly omitted any endorsement. Instead, it urged Turkey to “respect basic rights of its citizens” and made multiple references to the irregularities listed by the OSCE. The prevailing consensus within the administration was that knowing how badly Erdogan wanted Washington’s seal of approval, some concessions could be wrested in exchange, particularly over the bitter differences between Turkey and the United States in the US-led coalition’s campaign in Syria.

But such calculations came to naught when Trump placed the phone call without seeking the State Department’s advice, though Al-Monitor learned from sources familiar with details of the exchange that Tillerson was in the room when the call took place.

Faced with a barrage of criticism, the White House struggled to reframe the nature of the conversation. The White House's principal deputy press secretary, Sarah Huckabee, told reporters aboard Air Force One on April 18 that Trump’s “bigger point and priority” with the call was to “talk about shared interests as a NATO ally and a partner there.”

A Turkish official speaking to Al-Monitor on strict condition of anonymity denied speculation that Trump’s business partners in Turkey had helped arrange the phone call. Rather, Erdogan’s office had sought the conversation with Trump prior to the referendum and it was agreed in advance that it would take place.

The official described the conversation as “very very good” and confirmed that it was mostly focused on Syria. The official said Erdogan had repeated Turkey’s concerns over the US alliance with the Syrian Kurdish People’s Protection Units (YPG) and had urged they be excluded from a planned offensive to liberate Raqqa.

The official acknowledged that Trump had not made a commitment either way but that Defense Secretary James Mattis, who met with his Turkish counterpart Fikri Isik in Washington last week, was “especially sensitive and sympathetic” to Turkey’s worries about the YPG. Turkey is incensed by the partnership because the YPG is closely affiliated with the Kurdistan Workers Party, the rebel group that is waging a bloody insurgency inside Turkey.

But the US military and CENTCOM commander Gen. Joseph Votel in particular remain strong advocates of the YPG, whose valor and effectiveness against IS remains unrivaled in Syria. Votel and other senior administration officials are said to be pushing Trump to sign an executive dispensation that would authorize the Pentagon to directly arm the YPG and its Arab affiliates who fight under the banner of the Syrian Defense Forces (SDF). While Trump is believed to already be on board with this action, the White House delayed announcing that it was proceeding with the plan until after the Turkish referendum, reportedly because it didn’t want Erdogan to use the issue to whip up anti-Americanism during the campaign.

It remains unclear whether the White House will now wait until Erdogan’s visit before signing. Many analysts say all the prevaricating points to the conflicting goals of defeating IS with the help of the Syrian Kurds without alienating Turkey, a key NATO ally.

Nicholas Heras, a senior fellow at the Center for a New American Security, told Al-Monitor, “I think this is another sign of the ongoing discussion within the administration that Turkey has to be brought on board for whatever plan is executed to conquer Raqqa and to stabilize territory taken from IS in northern and northeastern Syria.”

Heras added, "There is strong acknowledgement at the highest level of national security planning that none of the key proposals put forward by President Trump himself to defeat IS can be accomplished without Turkish buy-in. However, the US military, which has nurtured and fought beside the Syrian Defense Forces and which trusts the YPG to not sell out Americans, still prefers to work by and through the SDF. And therein lies the dilemma.”

An SDF commander who spoke to Al-Monitor via WhatsApp on condition of anonymity had an optimistic outlook for the planned meeting between Erdogan and Trump, saying, “This will give the US president an opportunity to personally convince Erdogan of the merits of working with the SDF and sugarcoating the pill.”