Turkey launches Syria invasion hours after informing US of plans

Turkey told the United States on Tuesday that it plans to launch an attack into northern Syria within 24 hours, Al-Monitor has learned, as some in the Donald Trump administration tried to push back against reports that the president had given a green light for the impending incursion. 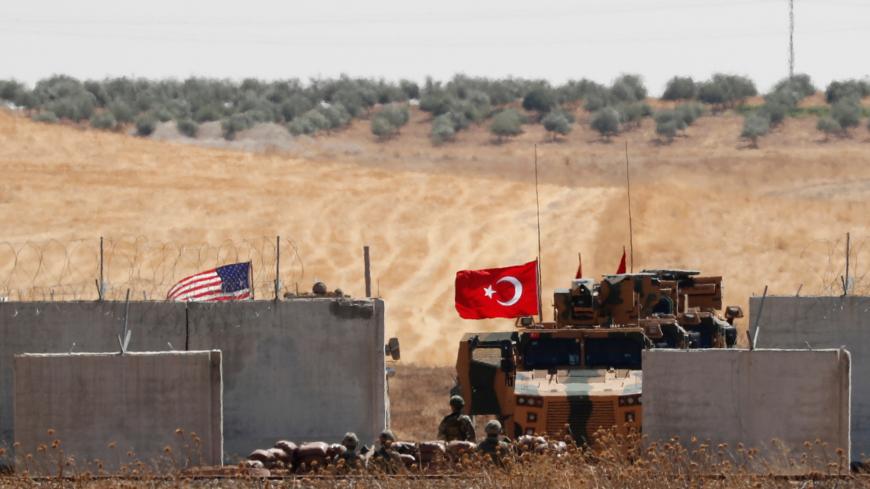 Turkish and US troops return from a joint patrol in northern Syria, as seen from near the Turkish town of Akcakale, Sept. 8, 2019. - REUTERS/Murad Sezer

Turkey has launched an attack into northern Syria, Turkish President Recep Tayyip Erdogan announced on Wednesday, just hours after Ankara informed the United States that it planned to launch an incursion within a day’s time.

Ankara's notice came in a statement to the US ambassador to Turkey, David Satterfield, a senior administration official said. In signaling the intent to invade, Erdogan appeared to buck threats of “economic obliteration” made by President Donald Trump on Monday, including possible sanctions.

It was not immediately clear what assets Turkey would use in the attack, though US partners on the ground said on Wednesday that warplanes had begun to carry out strikes against civilian areas. Experts who spoke to Al-Monitor said the incursion would likely be limited and face stiff resistance from the Kurdish-dominated Syrian Democratic Forces (SDF), which have received backing from the Pentagon.

“I think they have no intention of going deeper than 30 [kilometers],” Aaron Stein, director of the Middle East program at the Philadelphia-based Foreign Policy Research Institute, said of Turkey’s military plans. “[The attack] will achieve rapid success only to be hit with an insurgency.”

Washington Post columnist David Ignatius reported on Tuesday night that Turkish forces would strike Tell Abyad and Ras al-Ain, two of the zones included in the joint “security mechanism” that Trump decided to abandon on a call with Erdogan on Sunday. Al-Monitor reported on Monday that the decision had caught top Pentagon officials by surprise.

“Despite continued misreporting to the contrary, [Defense] Secretary Esper and [Joint Chiefs] Chairman Milley were consulted over the last several days by the President regarding the situation and efforts to protect US forces in northern Syria in the face of military action by Turkey,” chief Pentagon spokesman Jonathan Hoffman said in a statement. “The Department's position has been and remains that establishing a safe zone in northern Syria is the best path forward to maintaining stability.”

Also in the Washington Post on Tuesday evening, Fahrettin Altun, Turkey’s top communications official, insisted that Trump had used the call “to transfer the leadership of the Islamic State campaign to Turkey.” Turkish troops would team up with Free Syrian Army rebels, Altun wrote, a group that the CIA covertly armed until 2017.

Another senior administration official who spoke to reporters on Monday said Turkey “would bear full responsibility” if the Islamic State (IS) reconstitutes in the wake of the crisis, but did not make clear how the United States planned to hold Ankara responsible for maintaining overcrowded detention facilities currently under Kurdish control, including Al-Hol. Trump and Erdogan are set to meet at the White House on Nov. 13.

Meanwhile, in parts of the US government, anger continued to fester against Turkey for the planned attack after the extensive preparations made to set up a security mechanism to placate Ankara’s suspicion of Kurdish units.

A senior administration official said the United States had leaned heavily on the SDF to reduce its fortifications in those areas, under the idea that Turkey would then not invade. Instead, the official said, Turkish forces may have used nine joint air and ground patrols with US troops inside the safe zone “to collect information needed for an incursion.”

Kurdish officials indicated on Tuesday afternoon that Turkish forces had begun shelling positions on the border, but no injuries had been reported.

“The border areas of northeast Syria are on the edge of a possible human catastrophe,” SDF spokesman Mustafa Bali said on Tuesday. “This attack will spill the blood of thousands of innocent civilians because our border areas are overcrowded.”

With tensions heightened, the first surge in violence in the wake of Trump’s decision to evacuate US troops from the safe zone allegedly cropped up in the former IS capital of Raqqa Tuesday evening, with reports of suicide bombers and grenade attacks.

By the time Turkish officials informed Satterfield of the pending incursion on Tuesday, the Pentagon had already made significant adjustments to protect US troops, moving 50 Special Forces members out of the safe zone. The Defense Department also halted intelligence feeds to Turkey and cut Ankara from the air-tasking order, removing their sorties from US oversight.

"Much also depends on whether the US opens the airspace to Turkey," said Max Hoffman, an associate director for national security at the Center for American Progress, a progressive Washington think tank. "Without close air support and ISR this could be a much bloodied fight for Turkey and it’s proxies."

Yet former US officials still expect the Kurdish forces to be worn down by Turkish tanks — or forced to flee — in the open deserts of Northern Syria.

Speaking at a Washington event on Tuesday, Gen. Joseph Votel, former head of US Central Command, anticipated that the invasion would force Kurdish units in Syria to evacuate, but after that a reconstituted SDF might use an “insurgent approach to nip away” at territory conquered by Turkey.

“I think the Kurds will defend themselves as best they can,” Votel said. “When it becomes apparent to them that they cannot deal with this very modernized army and capabilities that Turkey has, then I think they will leave the area. Not only will their fighters leave, but I would expect that their citizens would leave as well.”