Trump administration scrambles to salvage US troop presence in Syria

President Trump says he would leave some US troops in Syria to keep the Assad regime and Iranian forces away from oil fields; the Syrian Democratic Forces commander speaks with both Trump and the Russian army chief of staff. 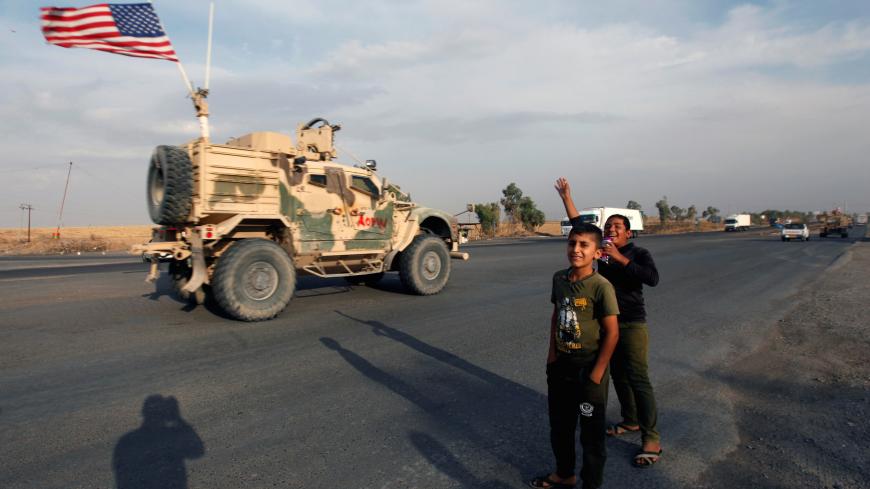 Boys wave toward a convoy of US vehicles that had withdrawn from northern Syria, in Erbil, Iraq, Oct. 21, 2019. - REUTERS/Azad Lashkari

President Donald Trump said today that he would leave an undisclosed number of American troops in Syria to keep the Bashar al-Assad regime and Iranian forces away from the war-torn country’s oil fields, as the US tried to court the Syrian Democratic Forces to remain in the Islamic State fight.

The move came as the US president celebrated the expiration of a five-day cease-fire, which the Trump administration hopes to make permanent.

But top US officials remained unclear what a residual American military presence, first reported by Al-Monitor, would look like.

In a full day of testimony on Capitol Hill today, the special representative for Syria engagement, James Jeffrey, said the Trump administration is "looking at what the options are for military and other support" even though the president has ordered American troops to withdraw from northern Syria. “We do contemplate, I believe, maintaining one of our two airfields that are there.”

It wasn’t immediately clear what plan had the greatest sway in the administration. Sen. Lindsey Graham, R-S.C., the author of a Turkey sanctions bill reaching far beyond the Trump administration’s now-lifted penalties on top Turkish officials, has called for a “safe zone” patrolled by international troops that would keep Iran and the Assad regime away from Syria’s oil fields.

The Defense Department is looking into a plan that would leave hundreds of US troops in the country to partner with Arab and Kurdish elements of the Syrian Democratic Forces with special forces and air power, as Al-Monitor reported Monday, as the bulk of American forces are set to leave the country. American drone coverage remains in place in the region, a senior defense official said.

“We are continuing a deliberate withdrawal from northern Syria,” a spokesperson for the US-led coalition to fight IS told Al-Monitor. “Some US troops will remain in Syria for now, far away from the Turkish border, to help ensure that [IS] does not reconstitute.”

On Wednesday, Trump hinted he would invite SDF Commander Mazlum Kobane to Washington after a phone call with the Kurdish general, writing “look forward to seeing you soon” in a tweet after announcing that US troops would stay in Syria.

Ilhem Ahmed, the head of the SDF’s political wing, told Al-Monitor that Trump administration officials told her that Kobane would be invited to the US. Just minutes later, Graham and five other senators sent a letter to Secretary of State Mike Pompeo asking to expedite the Kurdish general’s US visa.

But in Washington, the Kurdish delegation led by Ahmed took a more confrontational tone with the Trump administration, as experts said the United States and Russia were jostling for loyalty from the Syrian Kurds. One expert described this rivalry as a “tug of war.”

Kobane also spoke to Russian Army Chief of Staff Valery Gerasimov today and "expressed his thanks to President Vladimir Putin and the Russian Federation for their eagerness to work to defuse the war in our regions and spare civilians."

Testifying before a House subcommittee today, SDF political chief Ahmed called on the Trump administration to impose sanctions on Turkey, deploy international peacekeepers to the border region and install a no-fly zone over northern Syria.

“We received promises from the Americans,” said Ahmed, who was asked few questions by lawmakers. “We didn’t expect them to fight on our behalf, but we were sure that they wouldn’t allow that [Turkish incursion]. Even one day before the attack, we were under the impression that the airspace was going to be closed by the US.”

The United States eventually kicked Turkey out of the air-tasking order and stopped providing intelligence feeds to the NATO ally, a move that Pentagon officials said would help abate the pressure of airstrikes.

Ahmed said the United States also made promises “that security and stability would be provided” until a political solution was reached in Syria, in line with the Trump administration’s policy to deny the return of IS. The Kurdish leader said that 600 IS members had escaped from prisons as SDF guards left their positions during the Turkish incursion, six times more than the US has conceded.

Ahmed criticized the patrol scheme between Turkey and Russia, arguing that Syria’s “borders should be consolidated” and a national army should be reconstituted. Asked directly by Al-Monitor if the SDF would seek protection from the US to cut a better deal with the Syrian regime, Ahmed said she was “here [in the US] for that” but did not clarify how that would impact ongoing talks with the Russians.

But as a five-day cease-fire that the US hopes to make permanent came to an end Tuesday, experts following the two-week Turkish incursion into northern Syria doubted whether the Trump administration had the leverage or the wherewithal to act on the new demands.

In recent days, the State Department has insisted in private meetings with the SDF delegation that a residual American troop presence would stay, despite the Kurdish group saying that US forces may need to leave to meet Russian demands in exchange for protection.

Charles Lister, a senior fellow at the Middle East Institute, said he has great respect for Ahmed and "her grasp of strategy. But sadly, these demands are miles from Washington's abilities today. Moscow, perhaps?”

With the US withdrawal continuing to keep pace, the Pentagon appeared to be losing options to sustain and base its forces in the region to keep pressure on IS. Jeffrey insisted that the United States is “working on” plans to resupply American troops.

It was not clear whether Defense Secretary Mark Esper had cleared the plan to stage US troops in western Iraq with his counterpart in Baghdad as Prime Minister Adel Abdul Mahdi confirmed that US troops leaving Syria could not stay in Iraq permanently.

A senior US official said it was believed that the Pentagon chief had OK’d the move with Iraq’s Defense Ministry. But other experts familiar with US Iraq policy weren’t convinced, as Baghdad faces significant political headwinds from more than three straight weeks of anti-corruption demonstrations that have claimed 157 lives, according to an official inquiry.

“It sounds like no one bothered to ask Baghdad, which has its plate full at the moment,” said another former senior US official.