US faces new facts on the ground as cease-fire expires

Russia and Turkey strike a deal on a safe zone as the Syrian Democratic Forces told the Donald Trump administration that Kurdish forces had withdrawn from the Turkish border today in accord with a US-brokered agreement. 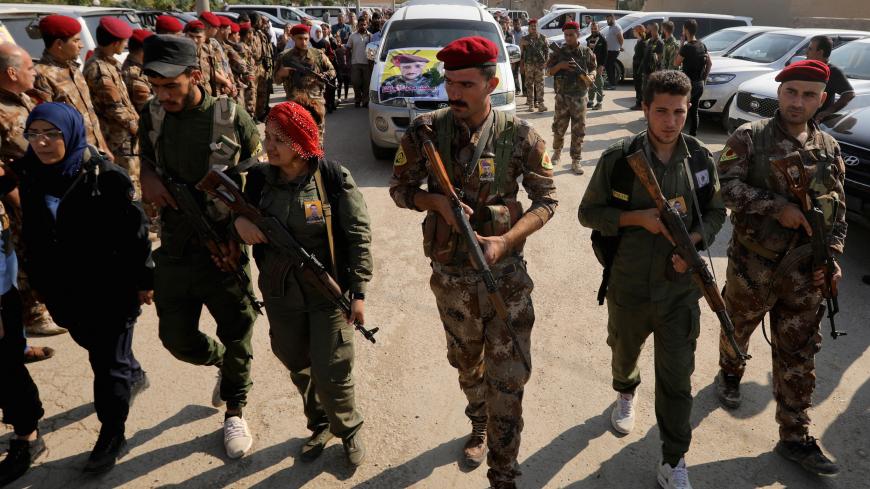 Members of the Syrian Democratic Forces take part Oct. 22, 2019, in a funeral procession in Qamishli, Syria, of Kurdish fighters who were killed during clashes in the northeastern Syrian town of Ras al-Ain. - REUTERS/Muhammad Hamed

The Syrian Democratic Forces (SDF) told the Donald Trump administration today that Kurdish forces had withdrawn from the Turkish border, keeping pace with a US-brokered agreement to pause Turkey’s incursion into northern Syria for at least five days.

“Today the vice president [Mike Pence] received a letter from [SDF chief] Gen. Mazlum [Kobane] notifying him that all SDF forces have withdrawn from the relevant area of operations,” Katie Waldman, a spokesperson for Pence, told Al-Monitor.

“The vice president welcomes this development and sees it as having satisfied the terms of the 17 October agreement, as pertains to the withdrawal of the YPG,” Waldman said, using the initials of the Kurdish People’s Protection Units, which formed the backbone of the SDF but which Turkey considers a terror group. While the SDF was long backed by the Pentagon, the United States decided earlier this month that it would not shield the group from Turkey.

But as top US officials admitted today that the geographic parameters of the Oct. 17 deal were never set in stone, Turkish President Recep Tayyip Erdogan appeared to leave a six-hour meeting with Russian President Vladimir Putin with an agreement that would set up joint patrols between the two sides along an extensive Syrian border region to the east of the Euphrates River.

James Jeffrey, the special representative for Syria engagement who attended Pence’s cease-fire talks with Erdogan, told lawmakers Tuesday, “We never used a map. We basically used wherever Turkish troops were, that’s where the safe zone existed. It has worked because we didn’t get to specifics.”

Even as Jeffrey and Secretary of State Mike Pompeo touted the five-day pause, which US officials told Al-Monitor that Turkey and Turkish-backed proxies had violated since nearly its inception, Ankara appeared to come away from marathon talks in the Black Sea port of Sochi with a deal to occupy a much more expansive swath of Syria.

Under the deal, Russia is to expel the YPG from 20 miles south of the border within just over six days, as Moscow and Turkey set up joint patrols and a verification scheme in a region where the United States and its NATO ally had held combined air and ground operations earlier this month.

“Erdogan has had a spectacular two weeks,” Howard Eissenstat, a nonresident fellow at the Project on Middle East Democracy, tweeted Tuesday. “But Turkey's success has hidden, and still unclear costs, in Turkey's relationship with the EU and the US. Likely not high, but that is uncertain.”

Eissenstat added, “Putin, on the other hand, has much to smile about.”

It wasn’t immediately clear how US forces would fit into the deal, as the Pentagon and Trump allies have worked to convince the skeptical president to leave a residual American troop presence in the country to fight the Islamic State (IS).

A senior US official told Al-Monitor it wasn’t clear if the Defense Department had approved drone surveillance coverage to oversee violations of the cease-fire, which the Trump administration hopes to make permanent.

Yet even if a tenuous cease-fire can hold, US relations with Syria’s neighbors and the SDF, crucial to maintaining the IS fight, still appear to hang in the balance.

Ilham Ahmed, head of the SDF’s political wing — speaking with The Defense Post on Monday as part of a tour through Washington to try to reverse Trump’s pullout decision — said that if American troops cannot defend the Kurds of northern Syria from Turkish attack, “They will have not any role in Syria.” Defense Secretary Mark Esper insisted Monday that the United States “had no obligation” to defend the Kurds from Turkish attack.

Ahmed met with State Department Syria envoy Joel Rayburn on Monday, a State Department official told Al-Monitor. Several sources familiar with the meeting said that Rayburn told Ahmad the United States would not leave Syria even if the SDF asked for this to happen in order to receive Russian protection.

Pressed repeatedly by the visitors on the issue of a potential American withdrawal in exchange for Russian protection, Rayburn broke a pencil, turned red, and said the US presence would stay no matter what. The National Interest reported a similar vesion of the story, though a State Department official said the claims were not accurate.

Meanwhile, Iraq also appears to be balking at an expanded US military presence, as more American troops have left the country this week. In a statement Tuesday, Iraq’s military said US forces leaving Syria do not have permission to stay in Iraq, which faces widespread protests against perceived government corruption.

Esper had previously said some 700 US troops heading from Syria to western Iraq could help remotely carry out the fight against IS. But American officials who spoke to Al-Monitor said that plan would be much more difficult than taking on IS on the ground in Syria.

“Nothing about this makes sense from a US national security perspective,” the senior official said.