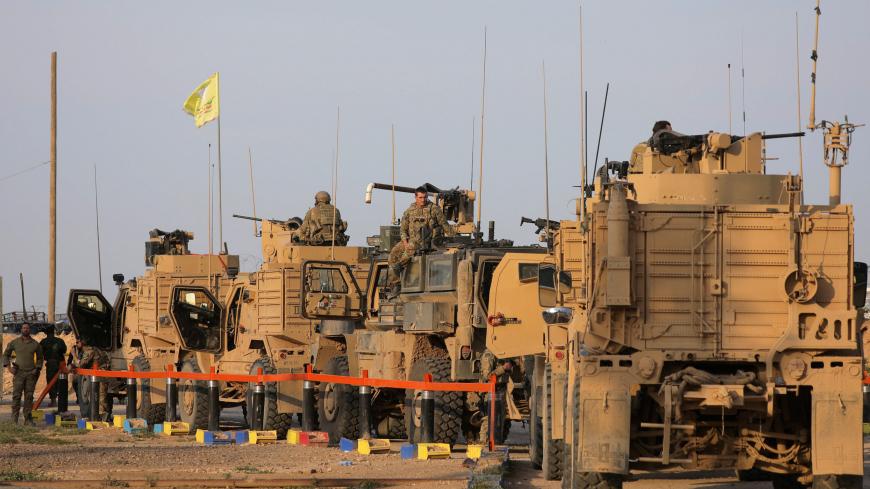 For days now, despite Turkish forces jeopardizing a fragile US-brokered cease-fire in northern Syria, President Donald Trump has insisted that American forces have secured oil fields liberated from the Islamic State (IS).

But Defense Secretary Mark Esper says the US administration is considering leaving a residual force of 200 American troops in Syria to keep the Bashar al-Assad regime and Russia away from the country’s contested rigs and derricks. This plan is likely to face pushback from within the administration and among allies, as well as lead to potential legal challenges from Congress, current and former American officials told Al-Monitor.

As first reported by The New York Times, Esper, traveling in the Middle East on Monday, said that under the current plan, some US forces would stay behind in Syria to “deny access to those oil fields by [IS] and others who may benefit.”

Sources inside the Trump administration weren’t clear that the president would endorse a plan to keep more forces in Syria. Such a move would jeopardize the president’s 2016 campaign pledge to bring home American troops from the Middle East after 18 years of fighting al-Qaeda and other extremist groups. “We are pushing for it,” a senior US official told Al-Monitor. “I don’t know if [Trump] will go for it.”

But multiple US officials who spoke to Al-Monitor were not clear where the idea for American troops to guard Syrian oil fields came from.

“I don’t know where all this oil infrastructure stuff is coming from,” the senior US official said. “Maybe playing to what [Trump] wants here. We have not seized the oil fields.”

The Wall Street Journal reported on Sunday that Trump ally Sen. Lindsey Graham, R-S.C., who opposed the American withdrawal from Syria, first floated the idea to the president last week.

But the American withdrawal appeared to pick up pace on Monday as a US ground convoy carrying troops and equipment out of Syria from the main American base in Kobane “is complete,” coalition spokesman Col. Myles Caggins told Al-Monitor in a statement. “The forces in the convoy will eventually be repositioned throughout the region after a temporary pause.”

A senior US official said the "majority" of American troops in Syria were onboard Sunday’s convoy. US troops had already left the contested city of Manbij and redeployed out of the safe zone last week. The Kurdish Red Crescent, the primary provider of medical care in the SDF-held northeast, said on Sunday that the Turkish incursion into Syria had killed 83 people and left 231 wounded since Oct. 9.

News of an American plan to defend oil installations has been rumored for years in Washington. The Assad regime has long coveted retaking the oil fields that dot Syria's northern and eastern provinces that have fallen out of Damascus’ hands as IS exploited the turmoil an of eight-year civil war.

In February 2018, Russian paramilitaries and pro-regime forces staged a large attack on an SDF-held field, known as Conoco, that left 200-300 dead, after the United States repeatedly warned the Moscow-backed forces to stop their advance.

But even with the protective striking power of American aircraft staying in place for the time being, US forces fighting in Deir ez-Zor, closer to the Iraqi border, would face challenges protecting themselves on the ground. The Arab-dominated areas in the valley have proven inhospitable to the YPG, as protests erupted over Kurdish management of oil facilities in the province, leading US Central Command to worry that the tensions could stoke an IS resurgence.

“The biggest concern for the US-led coalition in Deir ez-Zor should be force protection,” said Nicholas Heras, a Middle East fellow at the Center for a New American Security. “There is a lot of trial by fire that the US forces will have to directly step into in Deir ez-Zor, and they will not have the YPG as a layer of protection for them.”

The oil protection scheme may face a skeptical Congress, which has repeatedly challenged the Trump administration's war powers in Syria. Over the past two years, Sen. Tim Kaine, D-Va., has repeatedly asked the White House for the legal memo authorizing US Tomahawk missile strikes against chemical weapons facilities at al-Shayrat air base — even holding up the nomination of the State Department's top Middle East official for more than a year.

Kaine aides told Al-Monitor that a Defense Department legal analysis of the 2017 strikes sent to the Armed Services Committee in February did not meet the Virginia senator's requirement, and the "asserted rationale is insufficient."

The Trump administration will face questions about the proposal tomorrow afternoon, as Syria envoy Ambassador Jim Jeffrey testifies before lawmakers on the House Foreign Affairs Committee.

Experts worry the administration could be stretching a 2001 legal authority that the US military uses in Syria to combat terrorist groups such as al-Qaeda and IS.

“My sense is that the footprint you’d keep in the Deir ez-Zor oil fields is not anything like a counter-IS operation,” said Scott Anderson, a fellow at the Brookings Institution and a former State Department official during the Barack Obama administration. ”The argument that you’d keep that to counter IS is one that a lot of people would view with incredulity.”

Momentum for pushback against Trump’s initial orders to withdraw all of the approximately 1,000 US troops from Syria, except for a company-sized element that would remain at al-Tanf on the Iraqi-Jordanian border, could potentially benefit the YPG.

On Sunday, a delegation for the SDF’s political wing, known as the Syrian Democratic Council, landed in Washington to make another bid for support from the Trump administration, as Turkish President Recep Tayyip Erdogan appeared set to visit Russian President Vladimir Putin in the Black Sea port of Sochi on Tuesday, at the expiration of a five-day US-brokered cease-fire.

But with American troops already headed out of the country, protecting oil installations, such as the United States did in the hourslong 2018 battle against Russian paramilitaries and pro-regime forces on an eastern Syrian oil field may prove more difficult. The plan to reposition American forces into Iraq would face significant bureaucratic challenges, as the number of US troops is capped at 5,200, and the Iraqi government could impose limits on cross-border raids, experts say.

“Syria was great because it was a non-sovereign environment. The Syrian government couldn’t tell us to stop doing anything,” said Michael Knights, a fellow with the Washington Institute. “The Iraqi government can tell us to stop. That imposes restrictions and limits.”

“The next time we want to go and kill 200 Russian [mercenaries], does the Iraqi government agree with that?” Knights said. “Where are the aircraft coming from? The question is the next time somebody pushes on Deir ez-Zor, what if the host nation pushes back?”