After Russian forces in Syria appeared to be heading toward oil fields, the Pentagon proposed deploying tanks as a measure to guard the installations, a US official told Al-Monitor. 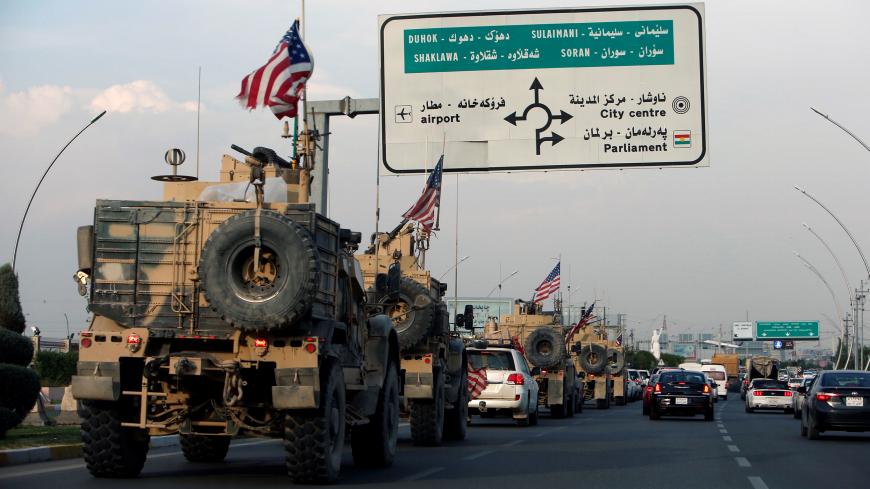 The Pentagon proposed deploying tanks to eastern Syria as an option to guard the region’s oil fields after the US was concerned Russia would cross a deconfliction line on the Euphrates River this week, a US official with knowledge of the situation told Al-Monitor.

Earlier this week, the US raised concerns that Russian forces might make a move to cross the river, which has served as a de facto marker between US-led operations to defeat the Islamic State and Moscow’s military campaign in support of Syrian President Bashar al-Assad, though Russian forces were not seen massing in the area.

At least two Trump administration sources confirmed there were concerns about putative Russian moves on Deir ez-Zor province, home to some of the war-torn country’s largest oil fields.

First reported by Newsweek, the option to deploy tanks near the oil fields gained momentum Wednesday night before marathon talks between American and Russian officials “at almost every level” neutralized the concern earlier on Thursday, said the official, speaking on the strict condition of anonymity.

In addition to the possibility of deploying tanks, the United States is looking at a range of lighter options. “What we’re hoping to do is something to deter the Russians and the Syrians from getting into that area,” the official said.

Word of the potential Russian threat comes as the Donald Trump administration appeared on the verge of a major reversal that would keep a residual presence of US troops in Syria. On Friday, Defense Secretary Mark Esper told reporters at a press conference at NATO headquarters in Brussels that the United States is "considering how we might reposition forces in the area” near Syria's Deir ez-Zor oil fields, reinforced by armored vehicles to stop the Islamic State from taking the resources. "All of the other forces" would return to the United States, Esper said.

The Wall Street Journal reported on Thursday that as many as 500 US troops could stay in Syria, backstopping the oil fields and leaving American forces at al-Tanf garrison, which abuts an Iranian military supply line on the Iraqi-Jordanian border.

The IS threat also remains a chief concern for American military planners. The United States is looking at military options to keep the Kurdish and Arab factions of the Syrian Democratic Forces together to fight the Islamic State, the official said, and deter Russia and the Assad regime from dismantling the group that was long backed by the Pentagon.

Earlier this week, a senior administration official told Al-Monitor that current Pentagon plans were aimed at pairing a few hundred US troops with the Kurdish People’s Protection Units (YPG) and Sunni Arabs and American air power, as European forces plan to exit the country.

President Trump, who has insisted throughout the week that a small presence of American troops would stay in Syria to keep Russia, Assad and the Islamic State away from the oil fields, spoke with SDF chief Gen. Mazlum Kobane by phone Wednesday as a five-day US-brokered deal to pause Turkey’s military offensive expired.

“Perhaps it is time for the Kurds to start heading to the Oil Region!” Trump tweeted on Thursday before a meeting with Chairman of the Joint Chiefs of Staff Gen. Mark Milley and other military leaders. Defense Secretary Mark Esper reportedly called into the White House Situation Room gathering from Brussels, where he is attending a NATO ministerial.

“I think we used [Trump’s] interest in the oil fields to use as an anchor to our 'retain a small presence plan,'” the senior official said.

By Thursday afternoon, the Pentagon appeared confident that American troops would stay in Syria, despite Trump’s initial Oct. 6 announcement that all US forces would leave. The United States plans to reinforce US troops in northeastern Syria “with additional military assets” alongside the SDF “to prevent those oil fields from falling back to into the hands of [the Islamic State] or other destabilizing actors,” a Defense Department official said in a statement.

Meanwhile, though the Trump administration indicated that a permanent Turkish cease-fire in northern Syria is mostly holding, the Pentagon has not restored Turkey to the air-tasking order or begun sharing intelligence, surveillance and reconnaissance feeds with Ankara again, a Defense Department spokesperson told Al-Monitor today.

Kobane, the Kurdish general, accused Turkish forces of violating the agreement to pause fighting on Thursday, as humanitarian groups reported shelling near the city of Ras al-Ain, just outside a town that US forces had patrolled alongside Turkey’s military just weeks ago.

With Russian and Syrian forces on the move, any plans to keep a small contingent of US forces in Syria would still represent an uphill battle. After Trump agreed in February to leave a residual US force of approximately 1,000, experts said US troops faced significant challenges to protect themselves that would only multiply as the American force winnows down while the regime looks to consolidate control over the oil fields.

“There was no place we were going without the SDF, and everywhere we were going was within a wider SDF base,” said Dana Stroul, a co-chair of the Syria Study Group. “I don’t know how the US can rely on the SDF for force protection and movement at the same time that they’re engaged with the Assad regime and the Russians.”

The United States has faced challenges from Russian and pro-Assad forces in eastern Syria before. In February 2018, American troops and the SDF halted an advance by Russian paramilitaries and the Syrian regime on the Conoco oil field, killing 200-300 fighters near where the US administration plans to put new forces, The Washington Post reported today. Moscow-backed forces crossed even after a one-star US general repeated warned his Russian counterpart to stop the advance over a deconfliction phone line.

On Wednesday, the US representative for Syria engagement, James Jeffrey, told lawmakers that the Trump administration hoped to keep airfields open in northern Syria to provide supplies to reinforce US troops that stay in the country, after Iraqi Prime Minister Adel Abdul Mahdi balked at the possibility of taking on US troops leaving Syria.

“You can helicopter supplies in” from Iraqi Kurdistan, said Nicholas Heras, a Middle East fellow at the Center for a New American Security. “The question is how expansive is the goal and how much pressure is the US allowing Russia and Assad.”