The commander of the Pentagon-backed Syrian Democratic Forces has signed off to help the Donald Trump administration protect the war-torn country’s oil fields, even amid an ongoing Turkish incursion the group has lobbied the United States to stop. 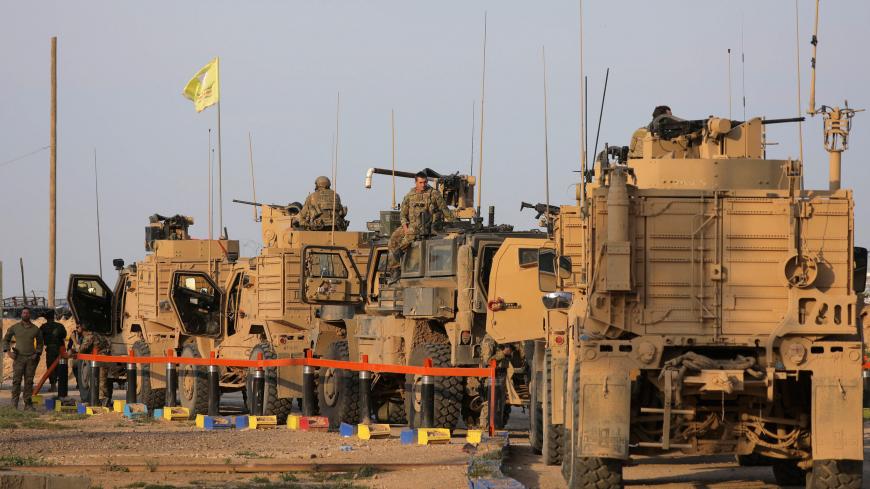 The commander of the Pentagon-backed Syrian Democratic Forces (SDF) signed off on a plan to help the Donald Trump administration protect Syria’s oil fields, despite an ongoing Turkish incursion the group has lobbied the United States to stop.

In a tweet sent on Wednesday afternoon, SDF chief Gen. Mazlum Kobane confirmed the group is “resuming its joint program of work with the coalition to combat [the Islamic State (IS)] and securing the infrastructure of [northeast] Syria.”

Today’s announcement from Kobane would mark a reversal, after the SDF’s political chief Ilham Ahmed had previously insisted that the United States must stop the Turkish incursion for the Kurdish-led group to stay in the IS fight. A source with knowledge of SDF operations said the shift came after meetings between Kobane and the military leadership of the US-led coalition.

Though senior Pentagon leaders, including Defense Secretary Mark Esper, have insisted since Turkey launched an incursion into northern Syria on Oct. 9 that it would continue to partner with the SDF, that alliance has come under consistent strain for weeks. The Kurdish People’s Protection Units, known as the YPG, which form the military backbone of the SDF, considered the withdrawal a “betrayal.”

The Turkish push also led to a slowdown in mopping up IS remnants, which the United States could begin to reverse. A senior US official told Al-Monitor that the Turkish incursion, which went farther into Syria than the Pentagon anticipated, had prompted the agency to halt the ground campaign to defeat IS.

"The coalition continues a deliberate withdrawal of forces from northern Syria and will reposition some forces to the Deir ez-Zor region in order to continue partnering with the Syrian Democratic Forces to defeat [IS] remnants, protect critical infrastructure and deny [IS] access to revenue sources," Col. Myles Caggins, a spokesman for the US-led coalition, told Al-Monitor.

The US-led coalition has had troops co-located on SDF bases near oil fields in eastern Syria for several months, Caggins said, asserting that the “pace of physical raids slowed down” as Turkish-backed forces pushed into Syria, but that the United States continued collecting intelligence, disrupting IS media and finance, and preparing military operations.

“It was never a 100 [percent] complete pause,” a State Department official told Al-Monitor, as the SDF paused operations to configure itself on the ground. “We are back working completely with the SDF.”

But though the United States plans to stay in eastern Syria at bases in Green Village and Deir ez-Zor city with hundreds of troops, it’s not clear what the American role will be in managing or extracting the oil, though Trump has said the United States would “keep” Syrian oil. A senior State Department official told reporters today the fields are “being worked by the local authorities” but added that the agency had no guidance to do “anything” with the oil.

Nor was it immediately clear what prompted the SDF reversal, as the group still has not won American commitments to a no-fly zone in northern Syria or to halt the Turkish incursion. A source close to the SDF said that American forces photographed by Agence France-Presse near Rmeilan oil field cannot stay there or at the Faysh Khabour border crossing with Iraq, as new US policy will limit American areas to south of the M4 highway. The group hopes that French and British forces will backfill that role.

But as US special representative for Syria Jim Jeffrey is set to depart for Turkey on Friday to meet with senior officials in Ankara and Syrian opposition groups trying to broker a UN-backed deal for new constitution, experts say the SDF is aiming to get leverage for an eventual deal to rejoin a consolidated Syrian state as the civil war winds down.

“What’s effectively happened is that the front lines have changed but in a way the US has recommitted to the SDF,” said Alexander Bick, a former National Security Council director for Syria during the Barack Obama administration. “There’s been a retrenching, and the US is serving as a backstop, so it’s very much in the SDF’s interests to keep the US warm.”

The source close to the SDF told Al-Monitor that the United States can benefit from the new posture on the oil fields by using the leverage to press Russia to motivate direct negotiations between the Bashar al-Assad regime and the Kurdish-led group that would precede the UN’s fresh Syrian Constitution.

The Syrian Kurds have sought guarantees of autonomy from the Syrian government, a reconstructed army, the release of political prisoners and the safe return of refugees from Assad-held areas, but the Trump administration has balked at their efforts to reopen negotiations with the regime.

Meanwhile, as Turkish President Recep Tayyip Erdogan finally confirmed today he would visit President Trump at the White House next week after several shifts, the administration appeared set to press Turkey on evidence of war crimes during the incursion. The senior State Department official said that Turkey’s incursion is “not a major offensive” and only involved Syrian Arab militias, not the Turkish army itself. Turkey's Defense Ministry has said 14 Turkish troops have died in the monthlong campaign.

Jeffrey, a former US ambassador to Turkey during the George W. Bush administration, also plans to raise American concerns “regarding potential [Turkish-supported opposition] violations of the law of armed conflict in northeast Syria,” a State Department official told Al-Monitor. Another US official said law of armed conflict is “top of mind for all of us." A Trump executive order authorizing sanctions “is still valid and available as needed.”

But Congress is pushing the Trump administration to take tougher action against Turkey amid reports that its forces are operating outside the "safe zone" brokered by Vice President Mike Pence in Ankara last month. In a letter to Secretary of State Mike Pompeo on Wednesday, a bipartisan contingent of senators led by Trump ally Lindsey Graham, R-S.C., and Democrat Chris Van Hollen of Maryland called on the agency to "immediately" let Congress know if Turkish forces are operating outside of the zone and "take swift measures" to enforce the deal with fresh sanctions.