'Majority' of US troops depart Syria

A convoy of US troops departed northeast Syria today, a spokesman for the US-led coalition to defeat the Islamic State told Al-Monitor. 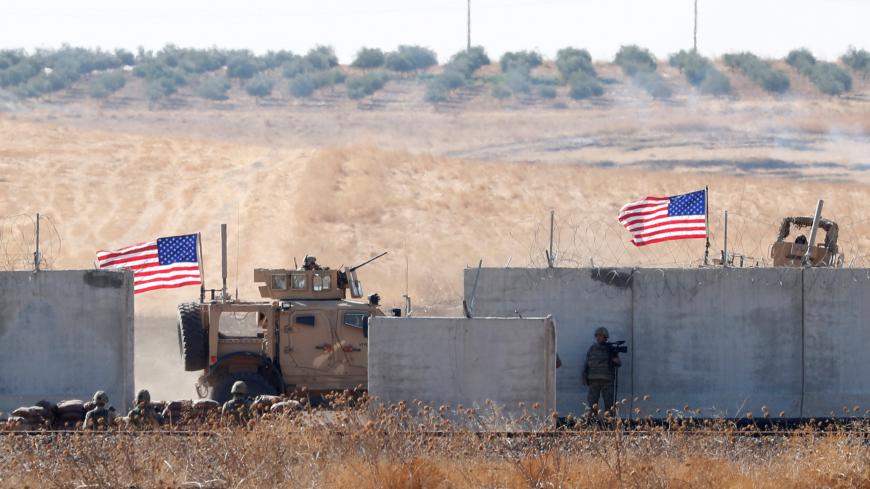 US troops are seen behind the Turkish border walls during a joint US-Turkey patrol in northern Syria, as it is pictured from near the Turkish town of Akcakale, Turkey, Sept. 8, 2019. - REUTERS/Murad Sezer

A convoy of US troops and equipment departed northeast Syria today, a spokesman for the US-led coalition to defeat the Islamic State (IS) said, further winnowing the American presence in the war-torn country as a White House-brokered cease-fire appeared to be on shaky ground.

“As part of our deliberate withdrawal from northeast Syria, a convoy departed from the Kobani Landing Zone,” Col. Myles Caggins, spokesman for the US-led coalition, told Al-Monitor in a written statement. “The convoy, and all movement associated with it, has been de-conflicted with other forces in the region.”

Caggins refused to provide details on the timeline or destination of the ground convoy, citing operational security, but said that “robust air assets” will monitor the units leaving the country. The Pentagon plans to keep aerial surveillance in place in northern Syria for the time being to monitor IS detainees, a senior defense official said on Friday.

The US troops and equipment that departed Kobani, near the LaFarge Cement Factory that served as the headquarters of the US-led coalition until F-15 fighter jets launched precision-guided bombs on the abandoned facility, will be repositioned throughout the Middle East.

Defense Secretary Mark Esper told reporters traveling with him to Afghanistan that he had spoken with the Iraqi minister of defense about plans to keep 700 US troops leaving Syria in western Iraq to maintain the IS fight.

American troops would leave Syria within “weeks,” Esper said, using helicopters, fixed-wing aircraft and ground convoys. A company-sized US element will remain at the southern al-Tanf outpost on the border with Jordan and Iraq that abuts an Iranian military supply line.

Fighting IS from Iraq will be "more dangerous," a senior US official told Al-Monitor, because American forces will cede access to territory won in the four-year campaign to Russian, Syrian and Turkish forces, leaving American troops to conduct "infrequent" cross-border raids.

"IS will grow and those [forces] will not stop them," the official said. "And this will spread back into Iraq."

It was not immediately clear how many US forces left the region on Sunday. A senior US official said the withdrawal was believed to be the "majority" of approximately 1,000 American troops in northern Syria, though cloudy weather was making American air cover less effective. The Kobani facility “remains open to facilitate the additional movement of troops and equipment outside of Syria,” said Caggins.

The movement of US forces came amid reports of repeated Turkish violations of a five-day pause in the northern Syria incursion brokered by Vice President Mike Pence on Thursday. Under the deal, Turkey was to halt fighting while Kurdish People’s Protection Units moved 20 miles south of the border.

But on Sunday, the Syrian Democratic Forces (SDF) evacuated the town of Ras al-Ain, which had been under repeated shelling from Turkish-backed units since the Thursday deal, defense officials and aid workers said.

Pence’s deal to stop the fighting has come under intense criticism inside the US administration, which saw the negotiation as a capitulation allowing Erdogan to keep Turkish forces deep inside northern Syria.

“The delegation did very little to look after the Kurds,” a senior US official told Al-Monitor, speaking not for attribution. “It basically just validated the goals of the operation.”

The official added, “Troops out there are livid."

President Donald Trump insisted in tweets quoting Esper today that the deal was “holding up very nicely,” as Kurds were “being resettled” and the United States “secured the Oil,” though nowhere in a gaggle with reporters did the defense chief use those exact words.

Meanwhile, the head of the SDF’s political wing was set to travel to the United States to make a last-ditch attempt for American support.

According to talking points obtained by Al-Monitor, the delegation led by Ilham Ahmed plans to ask the Trump administration to help secure the M4 road, where Turkish-backed proxies reportedly killed a prominent Kurdish politician last week.

The Syrian Democratic Council also wants Trump to keep American bases in Kobani, Hasakah, Shadade, Deir ez-Zor, Tabqa and Ramelan, and stop Turkish airstrikes. Ahmed will also ask for the SDF to be part of the United Nations-backed negotiations to end the eight-year Syrian civil war.