A high-level US delegation has worked out a deal to temporarily halt Turkey’s violent weeklong offensive into northern Syria, but many in the Trump administration believe the price the Kurds are paying is too high. 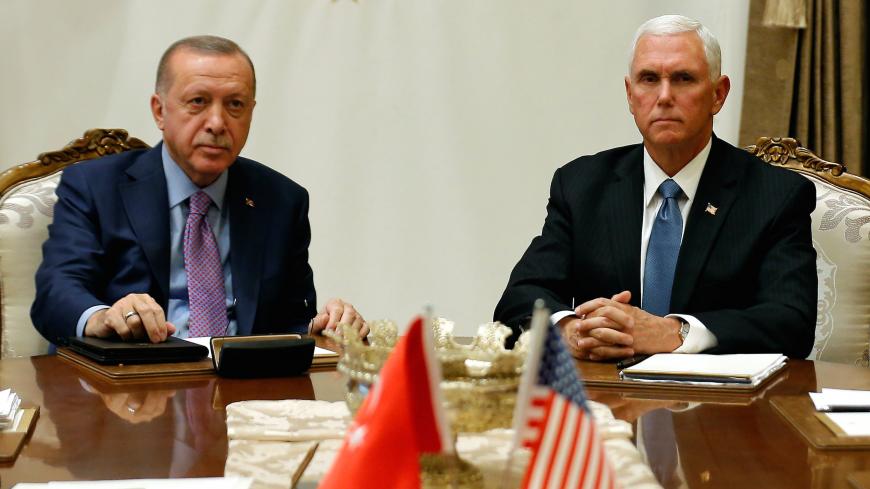 A high-level US delegation has eked out a deal to temporarily halt Turkey’s violent weeklong offensive into northern Syria, Vice President Mike Pence announced today, but the pact forcing the evacuation of Syrian Kurds who were long backed by the Pentagon is generating criticism within the Donald Trump administration.

Under the deal, the Kurdish People’s Protection Units, known as the YPG, which formed the backbone of the US-backed Syrian Democratic Forces, will retreat 20 miles (32 kilometers) south of Syria’s northern border with Turkey, Pence said. Ankara will pause forward military operations for five days.

While the deal with Erdogan appeared contingent on the US suspending limited sanctions on Turkish officials, it was not immediately clear whether Congress would give up a multi-pronged sanctions bill headed up by Trump ally Sen. Lindsey Graham, R-Sc. Graham's bill, announced on Thursday, would apply extensive penalties on Turkey for the weeklong incursion into northern Syria, including cutting off all military transactions.

President Trump, speaking to reporters after landing in Dallas, Texas, for a campaign rally today, called the deal an “amazing outcome” and seemed to suggest that Turkey’s violent incursion, which the United Nations says has displaced 160,000 people in northern Syria, helped force an agreement. “They couldn’t have gotten it without a little bit of rough love.”

But Turkish officials did not agree with the characterization. "We will suspend the Peace Spring operation for 120 hours for the PKK/YPG to withdraw,” said Mevlut Cavusoglu, Turkey’s foreign minister. “This is not a cease-fire."

But within the administration, the decision was seen as a capitulation to Turkey’s demands to create a "safe zone" inside the war-torn country without the YPG, which Ankara views as a terror group. The Pentagon had opposed Trump’s decision to allow a Turkish incursion into northern Syria following a phone call with Erdogan earlier this month.

“This is essentially the US validating what Turkey did and allowing them to annex a portion of Syria and displace the Kurdish population,” an administration official, speaking not for attribution, told Al-Monitor. “This is what Turkey wanted and the POTUS [Trump] greenlighted.”

Pence said an “orderly withdrawal” of the YPG to positions 20 miles south of the Turkish border had already begun.” US officials said YPG leaders contacted today took news of the deal “badly” but the group retained few options.

The last-minute deal came after US forces left destruction in the wake of their retreat in a sign that American units were leaving hastily.

The Pentagon said that American fighter jets launched a pre-scheduled airstrike after troops departed the Syrian headquarters of the US-led coalition to defeat the Islamic State on Wednesday in an effort to prevent remaining ammunition from falling into the hands of advancing Turkish-backed groups.

In a statement, Col. Myles Caggins, spokesperson for the US-led coalition, said two F-15E fighter jets targeted "the Lafarge Cement Factory to destroy an ammunition cache and reduce the facility’s military usefulness.” The factory, situated between Kobani and Ain Issa in northern Syria, had served as the de facto headquarters for the American-led military effort.

Yet if the agreement holds, the Syrian Kurds will salvage the border city of Kobani, which Turkey had promised not to advance upon. Kurdish forces “brought [Turkey] to a standstill” near the city, the official who spoke to Al-Monitor said, adding that the Turkish-backed forces had been prevented from advancing farther south.

Though US intelligence spotted signs that Turkish forces were massing for a long-promised assault into northern Syria before Trump tacitly allowed the incursion on a phone call with Erdogan 10 days ago, Ankara's three-pronged military drive into Syria has advanced farther than the Pentagon anticipated.

A senior defense official said Tuesday that Turkey’s offensive had gone “beyond the 30 kilometers that we understood that they would do” and farther to the west.

Trump said the United States “would be able to get the rest of IS” as US troops withdraw from the country. But it was not immediately clear that the Trump administration would be able to reenlist the Kurds in the fight to defeat the Islamic State in Syria after the Defense Department paused the mission last week.

SDF leaders made a deal with the Bashar al-Assad regime for protection after Trump refused a last-ditch request from the group’s leader, Gen. Mazlum Kobane, for military support.