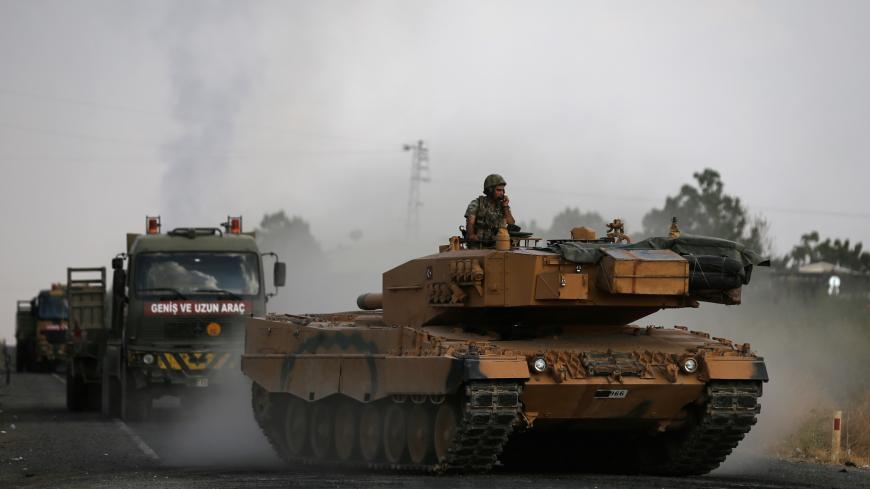 Turkey began violating a deal to temporarily halt its offensive into northern Syria early today, US officials told Al-Monitor as reports emerged from the ground of artillery attacks against Kurdish fighters and civilians in a city where American and Turkish forces recently held joint patrols.

By Friday afternoon, the Turkish military had advanced on Ras al-Ain, a senior US official said, one of the sites of the joint "security mechanism" in northern Syria the Pentagon established to assuage Turkey’s concerns over the Kurdish military presence.

Mustafa Bali, a spokesman for the formerly US-backed Syrian Democratic Forces (SDF), said Turkish violations of the deal, which the Kurdish-dominated group agreed to abide by, began on Thursday evening. Dave Eubank, an American aid worker in nearby Sari Kani, said “hundreds” of wounded had been trapped by the Turkish assault and a nearby hospital had taken damage from repeated shelling.

Turkish President Recep Tayyip Erdogan called reports of new clashes "nothing but disinformation" in a press conference on Friday, but a tweet from President Donald Trump indicated that Erdogan had conceded that "minor sniper and mortar fire" did occur.

The first reports of breaches of the agreement came just hours after Vice President Mike Pence and Erdogan struck a deal to allow the Kurdish People’s Protection Units to evacuate 20 miles (32 kilometers) south of the border over the next five days.  In a call with his Turkish counterpart on Friday, Defense Secretary Mark Esper said Turkey “must adhere to the full terms of this agreement” after the reports of violations.

But as his cabinet urged Turkey to adhere to the deal, President Trump appeared to frequently shift back-and-forth between positions on the fighting, praising the deal and calling on Turkey to help “double secure” IS prisons while seeming to validate the Turkish military push.

Speaking at a campaign rally in Dallas on Thursday night, Trump described the fighting as “pretty vicious.” Trump insisted that Turkey’s offensive had helped secure the brief pause, though northern Syria had been peacefully patrolled by US forces in the weeks before the commander-in-chief allowed a Turkish incursion that ruptured the so-called security mechanism in Tell Abyad and Ras al-Ain.

“Sometimes you have to let them fight like two kids in a lot,” Trump said. “You got to let them fight and then you pull them apart.” The United Nations says the conflict has displaced as many as 190,000 Syrians.  American intelligence, surveillance and reconnaissance would remain in place in northeastern Syria for the time being, a senior defense official said, but did not provide a timeframe.

No American ground troops will participate in the enforcement of the safe zone, Esper said in a statement to reporters on Friday, as US forces will retain the right to defend themselves if fired upon. “The force protection of our service members remains our top priority, and as always, US forces will defend themselves from any threat as we complete our withdrawal from the area,” Esper said.

But elsewhere inside the administration, the deal — which top officials were no longer calling a cease-fire late Thursday — was met with frustration by officials who opposed Trump’s move to allow Turkey’s incursion and believed the United States had allowed Ankara to “annex” a chunk of northern Syria. The SDF had agreed to abide by the five-day pause in fighting.

Some feared that the Pence-brokered agreement gave Turkey military leverage it had not gained on the battlefield after Kurdish units halted one prong of the 10-day offensive near Kobani. Turkish forces only occupied a third of the territory they were ceded under the deal, special representative for Syria engagement Jim Jeffrey told reporters on Thursday.

Allies also criticized the deal. “The so-called cease-fire is not what we expected. In fact, it’s not a cease-fire, it’s a demand of capitulation of the Kurds,” European Union Council President Donald Tusk told reporters in Brussels. And French President Emmanuel Macron said Friday he learned that US troops were pulling back from Syria "by tweet."

Despite the brief pause in fighting, Turkey had claimed they could not control Turkish-supported opposition groups, the senior US official said, despite pressure from the Trump administration to own up to reported atrocities such as the killing of a prominent Kurdish politician in broad daylight on Syria’s M4 highway.

Rights groups have said Turkish military airstrikes and Free Syrian Army fighters have indiscriminately targeted civilians. The Kurdish health authority in northeast Syria said on Thursday that 218 civilians have died since the Turkish offensive started, including as many as 18 children.

“That says it all about Turkey. They are deceptive and only in it for their interest. Not a partner or ally,” the senior official said. “Everyone in our government gets that now.”

Meanwhile, some 1,000 American forces continued to hastily evacuate the complex battlefield, destroying equipment in place with Russian, Syrian, Turkish, Kurdish and Islamic State fighters “all floating around in a very wild way,” Jeffrey said. “We are most concerned about getting our troops out of the way, which is what DOD is doing at this point.”