Tensions flare between US, Shiite factions in Iraq

The recent escalation by Iran-affiliated Iraqi Shiite militias against US forces on the Iraqi-Syrian border may offer an early indication of the coming confrontation between the two sides after the Islamic State is eliminated from Iraq. 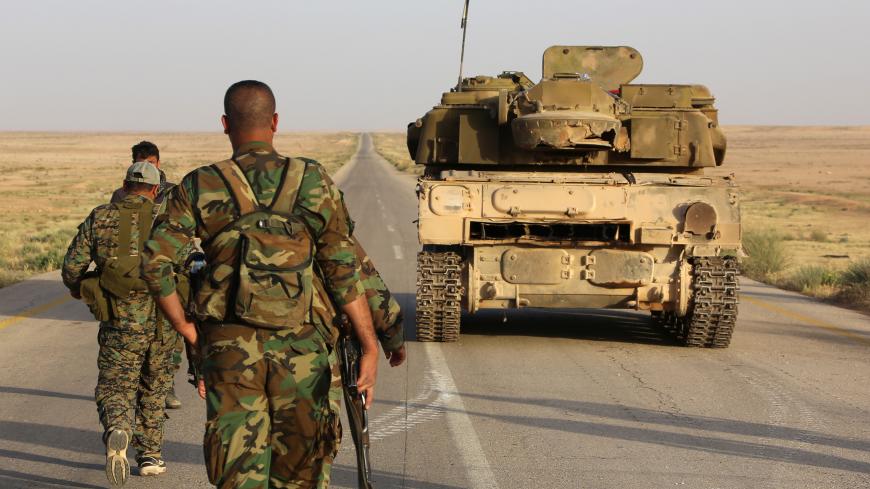 Syrian government forces secure a road for a military convoy in the desert area of Saba Biyar as fierce clashes are reported in southeastern Syria near the border with Iraq, May 10, 2017. - AFP/Getty Images

As the Islamic State weakens in Iraq and Syria, the forces fighting the group are eyeing each other more critically. The United States and Iran are vying for influence in Iraq, and accusations are flying.

In the battle to control the Iraqi-Syrian border, the Sayyid al-Shuhada Brigades, an armed faction of Iraq’s Popular Mobilization Units (PMU) came under attack Aug. 7. In a strongly worded statement the same day, the group accused US forces of attacking their positions in western Iraq and vowed to avenge the casualties.

The statement said US forces had heavily bombed the brigades’ positions on and near the border, “killing and wounding many of our forces.” The group called for “an urgent meeting of leaders of the Islamic resistance factions in Iraq to consider an appropriate response.”

Denials came from many quarters. On Aug. 8, the Iraqi Joint Operations Command denied any attack on PMU positions in the area and stressed, “Incidents reported by the media occurred outside the Iraqi border.” Coalition spokesman US Army Col. Ryan Dillon stated via his official Twitter account, “Allegations of #coalition strikes vs. Popular Mobilization [Units] near #Iraq-#Syria border are INACCURATE. No coalition strikes there [at this time].” Even the leadership of the wider PMU issued a statement the next day echoing the coalition’s denial.

IS immediately claimed responsibility for the attack, publishing footage of the ambush showing the flag of the Sayyid al-Shuhada Brigades.

The Iraqi faction had been accompanied by members of the Iranian Revolutionary Guards Corps (IRGC), and IS captured and killed one of them, Mohsen Hajji. In contrast to what the Sayyid al-Shuhada Brigades claimed, the IRGC deputy commander-in-chief, Brig. Gen. Hussein Salami, said in an Aug. 14 TV interview that the attack had taken place on Syrian territory and was carried out by IS.

“Martyr Hajji was with other fighters in their headquarters in an area between al-Tanf and Abu Kamal, which was targeted by IS terrorist forces using several car bombs. At the same time, an offensive force managed to circumvent the headquarters and ambush the fighters,” Salami said.

It seems that despite the obvious falsehood of their accusations, some Shiite factions are trying to stir up anti-US sentiment to rid Iraq of US forces in the post-IS stage.

Ahmed al-Maksousi, assistant secretary-general of the brigades, said in an Aug. 8 TV interview, “If we do not deter the Americans and don’t respond to them, they will continue to overstep their bounds. This is why we must have a clear response.”

Meanwhile, the semi-official Iranian Fars News Agency reported that the United States is building a base in western Mosul province; neither the Iraqis nor the Americans have confirmed this.

Michael Knights, a fellow at the Washington Institute, told Al-Monitor, “Sayyed al-Shuhada Brigades and their mother faction, the Hezbollah Brigades [which is also part of the PMU], have taken it upon themselves to monitor the movements of US forces in Iraq in the areas where the PMU are located. The brigades are stationed outside US forces’ military bases, keeping a close eye on them in an attempt to intimidate them.”

The Iraqi-Syrian border became the focus of this conflict as the Shiite factions close to Iran, with the help of advisers and fighters from the IRGC, sought a foothold at the border to prevent the US from taking control there. The Hezbollah Brigades, which is also close to Iran and present in both Iraq and Syria, has declared its objective of preventing the United States from gaining control of the Iraqi-Syrian border.

Another military base, al-Tanf, is also involved in the controversy. US forces use the base near the Iraqi-Syrian-Jordanian border to train the Revolutionary Commando Army, a Syrian faction established in 2015 for the purpose of fighting IS.

In an Aug. 3 statement, the Hezbollah Brigades said, “After a series of tactical operations by the Islamic Resistance/Hezbollah Brigades and other factions, al-Tanf base lost its importance in carrying out the alleged American project.” It added, “The Americans and their allies have to retreat to the Jordanian border.”

In June, Iraqi Shiite factions fighting alongside Syrian regime forces were able to reach the Iraqi-Syrian border, blocking the road between al-Tanf and the areas under IS control. But the recent attack on Sayyid al-Shuhada Brigades showed how tenuous the Shiite factions' hold is, positioned in a narrow corridor north of al-Tanf with insufficient logistical support and a lack of aerial cover and artillery support in an open desert.

A source in the Iraqi army told Al-Monitor on condition of anonymity, “The Hezbollah Brigades and Asaib Ahl al-Haq [another Iraqi Shiite faction close to Iran] tried to find a corridor to connect the Shiite factions from both the Syrian and Iraqi sides, but could not do so in the absence of support, aerial cover or even armored vehicles from the Iraqi forces.”