Palestinian President Mahmoud Abbas zeroed in on the two-state solution in his speech to the UN General Assembly, giving no quarter to talk about compromising on the support provided to families of martyrs. 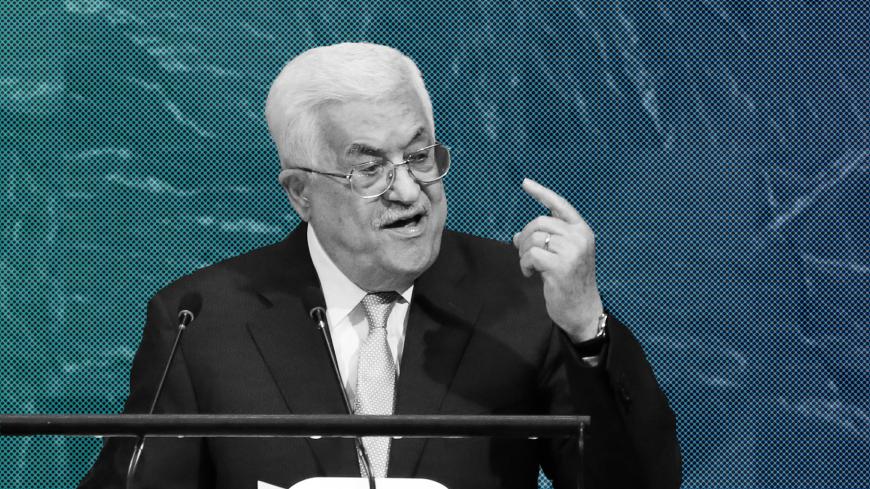 Palestinian leader Mahmoud Abbas delivered a strong speech at the UN General Assembly on Sept. 20, strongly focusing on the two-state solution while rejecting any compromise on the issue of support to prisoners and families of martyrs.

In a 3,047-word speech in New York City, Abbas referred to the Israeli “occupation” 28 times, criticizing US Ambassador to Israel David Friedman's reference to an alleged occupation. “It is thus very strange to hear some of those who hold the responsibility to end this occupation referring to it as an 'alleged occupation,'” Abbas said.

The Palestinian president also used the term “peace” 27 times and referred to “Israel” and “Palestine” 26 times each. The "State of Palestine" was referred to 18 times, while the term “two-state solution” was mentioned 13 times. Neither US President Donald Trump nor Israeli Prime Minister Benjamin Netanyahu, who spoke before Abbas, ever mentioned Palestine, the occupation or the two-state solution in their respective speeches at the General Assembly.

Perhaps the strongest part of the speech by Abbas was his reference to prisoners and martyrs. In the close of his address to members of the UN General Assembly, he praised Jerusalemites, Palestinians in exile and in the diaspora, and Palestinians in the West Bank and Gaza, encouraging them to be patient and promising that “freedom is coming and is inevitable.” Abbas used the term “I salute” in addressing the groups, including a special group that has been the subject of Israeli and US congressional criticism.

“I salute our glorious martyrs and our courageous prisoners in Israeli jails,” Abbas said in defiance of a US anti-Palestinian congressional bill, the Taylor Force Act, which would cut off US aid to Palestinians if the Palestinian Authority (PA) continues in its decades-old policy of providing stipends to prisoners and the families of those who were killed in the Palestinian struggle. While the support is five decades old, The Prisoner’s and Martyr’s Fund was established as part of the Palestinian Basic Law and has been recently under attack by the Israeli government and US Congress. The US Senate Foreign Relations Committee passed the draft anti-Palestinian legislation with a 17-4 vote Aug. 3. Both the United States and Israel have not made a major issue in the past of Palestinian laws mandating support to prisoners and families of those killed. Article 22 of the Basic Palestinian Law passed by the Palestinian Legislative Council in 1997 and ratified by President Yasser Arafat in 2002 calls for “maintaining the welfare of families of martyrs, prisoners of war, the injured and the disabled.”

The US State Department said Sept. 14 that the Trump administration "strongly supports the Taylor Force Act, which is a consequence of the [PA] and Palestine Liberation Organization's policy of paying terrorists and their families."

Reuters estimated on Aug. 4 that if enacted, the bill would result in the United States slashing its support to Palestinians by $300 million annually.

The Trump administration’s support for the Taylor Force Act stands in total contrast to the words and actions of Trump and his aides. In a meeting with Abbas after his speech in which he saluted prisoners and martyrs, Trump praised the Palestinian leader. “It’s a great honor to have President Abbas from the [PA] with us — and his representatives, who have been working very hard with everybody involved toward peace,” Trump said Sept. 20 while welcoming Abbas and his delegation in New York after Abbas’ speech.

Present in the meeting between Trump and Abbas was Jason Greenblatt, Trump's assistant and special representative for international negotiations. Greenblatt had spoken Sept. 19 on the sidelines of the UN General Assembly at the Ad Hoc Liaison Committee, saying the United States will work with the donor community to help support the Palestinian economy.

Perhaps to show it means what it says while publicly supporting the Taylor Force Act, the Trump administration quietly directed an additional $20 million toward projects that would "directly benefit" the PA. The New York-based Jewish Insider quoted US congressional sources as saying that the money was transferred without fanfare and before the anti-Palestinian act takes force. “It means that the Trump administration is trying to get money out of the door before Taylor Force [Act] goes into effect,” a congressional aide told the Jewish Insider’s Washington reporter, Aaron Magid.

The issue of prisoners and martyrs is a strong red line in Palestinian society. Perhaps this is why, after years of quiet, the Israeli leadership has tried to use this issue to deflect pressure on it to make progress in the peace talks by trying to show Palestinians as the obstacle to peace. Abbas, who might be making one of his last speeches at the UN, has rejected any compromise on this issue and attempted to steer the attention back to the major issue of occupation and the two-state solution. While it is unlikely that the pro-Israeli US Congress and White House will not follow through on this legislation, the mixed signals to it appear to show the schism between the rhetoric and the reality in terms of accomplishing Trump's repeated talk about an Israeli-Palestinian “ultimate peace deal.”