Trump's peace plan, rolled out with Israeli leader Benjamin Netanyahu but with no Palestinians present, would give the Palestinians no border with Jordan. 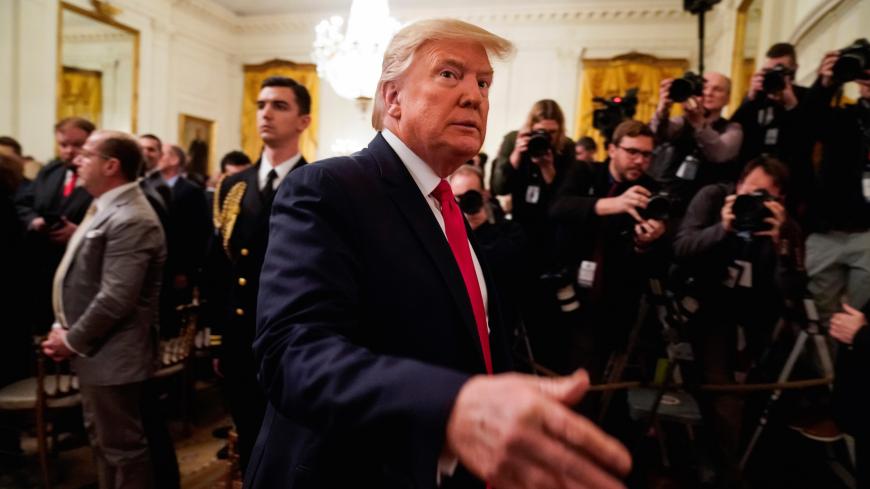 WASHINGTON — The atmosphere felt more like a celebratory Mar-a-Lago gathering, bringing together really good friends, rather than the usual somber, staid event one might have otherwise expected at a Middle East peace plan rollout.

A military band in red dress uniforms played "Hail to the Chief" as US President Donald Trump and Israeli Prime Minister Benjamin Netanyahu entered the White House East Room. Sheldon and Miriam Adelson, the GOP donors and pro-Israel philanthropists, were sitting in the front row, along with the US and Israeli officials and VIPs who had labored on the plan. There were of course members of Congress and other VIPs, including Trump impeachment attorney Alan Dershowitz, former Connecticut Democratic Sen. Joseph Lieberman, now head of the anti-nuclear deal United Against Nuclear Iran, and the ambassadors from the United Arab Emirates, Bahrain and Oman. No Palestinian officials were present — the Trump administration ordered the Palestinian mission in Washington closed in 2018.

Trump and Netanyahu both made lengthy congratulatory statements on a 180-page peace plan almost no one had seen prior, frequently interrupted by applause. They took no questions, though a couple hundred journalists stood packed in the back. Of the major American news channels, only Fox News apparently covered the event live, which was hastily scheduled during the last day of the Trump defense team’s arguments in Trump’s Senate impeachment trial.

Trump, sounding relaxed and untroubled by the Senate proceedings, proclaimed his peace vision a historic breakthrough.

“My vision presents a ‘win-win’ opportunity for both sides, a realistic two-state solution that resolves the risk of Palestinian statehood to Israel’s security,” he said. “Today, Israel is taking a giant step toward peace.”

Trump said that both Netanyahu and his rival, Blue and White party leader and retired Lt. Gen. Benny Gantz, who Trump met yesterday, had agreed to endorse his vision as the basis for direct negotiations with the Palestinians. But it wasn’t clear how much Trump’s vision left for the Palestinians — who rejected the plan — to negotiate.

“The United States will recognize Israeli sovereignty over the territory that my vision provides to be part of the State of Israel,” Trump said to applause. “Very important.”

Ticking off all he said he had done for Israel —- moving the US Embassy to Jerusalem, recognizing Israeli sovereignty over the Golan Heights, “getting out of the terrible” 2015 Iran nuclear deal, Trump then said it was only fair that he has to do a lot for the Palestinians. He then noted that the applause he had been receiving from the friendly room abruptly stopped.

“This map will more than double the Palestinian territory and provide a Palestinian capital in eastern Jerusalem where America will proudly open an embassy,” Trump said. “No Palestinians or Israelis will be uprooted from their homes.”

Notably, Trump’s peace vision seems to count on his reelection later this year to another four-year term.

In a letter Trump said he sent today to Palestinian Authority President Mahmoud Abbas, “I explained to him that the territory allocated for his new state will remain open and undeveloped for a period of four years,” Trump said. “During this time, Palestinians can use all appropriate deliberation to study the deal, negotiate with Israel, achieve the criteria for statehood, and become a truly independent and wonderful state.”

Satloff, the head of the Washington Institute for Near East Policy, wrote that in the longer term, “this plan is premised on a second term for Trump.” Satloff said, “If that happens, the political dynamics may force a re-think by some Arabs [and] Palestinians. If it doesn’t happen, I doubt much of this plan survives as US policy.”

Husam Zomlot, the former head of the Palestinian Liberation Organization mission in Washington and the current PA ambassador to the UK, condemned the Trump document as further shredding prospects for a two-state solution.

“Israel announced it will annex occupied Palestinian land on Sunday,” Zomlot wrote on Twitter. “This is the 1st outcome of Trump's ‘peace plan.’ This is an American president that has killed the prospects of a negotiated two-state solution and undermined international law and order. What a political circus.”

Netanyahu, for his part, did not seem in any rush for the Palestinians to say yes to negotiations.

Former US diplomat Robert Danin noted that the map the Trump document published deprives Palestinian territory of a shared border with Jordan.

“What the map does … there is no contiguity between what will be Palestine and the rest of the Arab world,” Danin, now a senior fellow at the Harvard Kennedy School’s Belfer Center, and who worked on Israeli-Palestinian issues in five US administrations, told Al-Monitor. “Palestine will be sandwiched between Israeli territory on the West Bank. It will have no border with Jordan.”

Jordan’s Foreign Minister Ayman Safadi stopped short of outright rejecting the Trump plan, but expressed alarm at its departure from Amman’s position on the parameters for a two-state solution.

The Jordanian Foreign Ministry said in a statement, “Jordan today reaffirmed that the establishment of an independent Palestinian state on June 4, 1967 lines with East Jerusalem as its capital, living in peace side by side with Israel on the basis of the two-state solution that fulfills the legitimate rights of the Palestinian people, in accordance with international law, is the only path to a comprehensive and lasting peace.”

Netanyahu travels to Russia on Wednesday to meet with Russian President Vladimir Putin about his consultations in Washington.

Abbas has called for an emergency meeting of the Arab League to be held Saturday.