Intel: What Russia’s defense minister is up to in Egypt

Russian Defense Minister Sergei Shoigu is leading a military delegation to Egypt for the sixth session of the two countries' joint commission on defense cooperation. 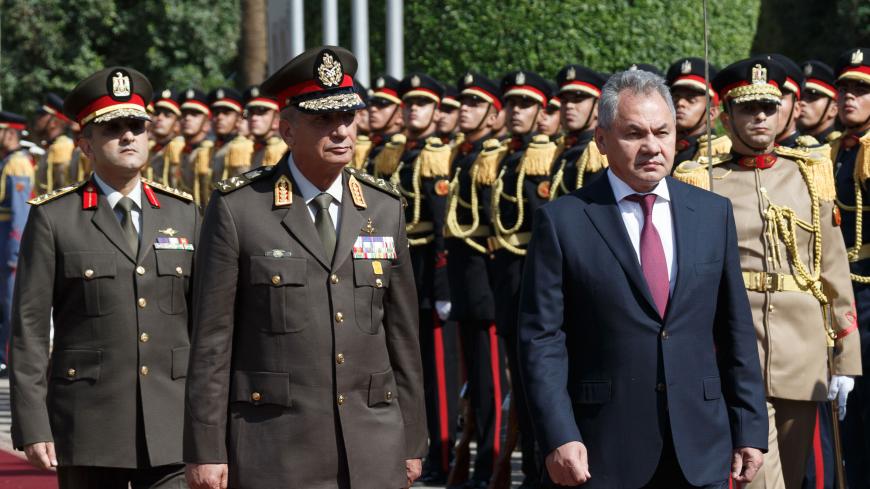 “The talks will focus on issues of international and regional security, the situation in the Middle East and North Africa, as well as issues of Russian-Egyptian military and defense cooperation,” Russian Defense Ministry spokeswoman Rossiyana Markovskaya told reporters.

Why it matters: The visit comes amid intensifying relations between Moscow and Cairo. Last month, Sisi, the sitting chairman of the African Union, co-hosted the first Russia-Africa Summit in Sochi alongside Russian President Vladimir Putin. It was the third meeting between the two presidents this year. Days later, the Egyptian air force's tactical training center near Cairo hosted joint Russian-Egyptian military drills dubbed Arrow of Friendship-1. Russia and Egypt have held several joint naval and airborne counterterrorism exercises since 2015, but the fall exercises in Egypt were the first drills involving air defense forces from the two countries. “When we are in Egypt we always feel like at home,” Shoigu said while addressing the bilateral commission on defense cooperation.

New wine into old bottles: The Russia-Africa Summit in Sochi, Shoigu stressed, “confirmed that Egypt occupies a leading position on the African continent and remains one of Russia’s strategic allies in this region.” The Russian military, he added, “is ready to assist in strengthening Egyptian military forces and defense capabilities.”

The remarks signal the strategic significance Egypt has come to play for Russia over recent years as a gateway to both Africa and the Middle East. Indeed, Russia has ambitions to play a more proactive role on the African continent while echoing Cold War-era strategic thinking that saw the axis of “Egypt-Syria-Iraq” as the basis for the Soviet Union's geopolitical foothold in the Middle East. While the contemporary Russian approach to the region is far more flexible, Egypt’s geography at the crossroads of continents and maritime choke points at both ends of the Red Sea — the Suez Canal and the Bab el-Mandeb Strait — remains key.

Russia, in turn, is ready to help Egypt achieve its own ambitions, predominately in the military field, just as it has done with Turkey, another US ally looking to diversify its circle of friends.

What’s next: The Russian delegation to Cairo notably included Oleg Ryazantsev, deputy minister for trade and industry; Grigory Ivliev, head of the Federal Service on Protection of Intellectual Property; Alexey Frolkin, deputy director of Federal Service on Military-Technical Cooperation; and Oleg Markeev, executive director of Rosoboronexport, the Russian arms exporter. The diverse cast of characters suggests the parties discussed not just future military deals but also opportunities for co-production of certain types of weapons of interest to Egypt.

Unlike the Soviet Union, which only provided military aid and hardware to its Arab partners, Putin's Russia appears to want to go further with joint military production that may, in the long run, prove more secure and beneficial for both parties.

Know more: Don't miss Anton Mardasov’s story on why recent Russian-Egyptian drills are important and Salwa Samir's take on what Russia is seeking in Africa.