President Putin and President Aoun hold wide-ranging talks, including about the return of refugees to Syria, and Lebanon indicates that despite its issues with Washington, strong US-Lebanese government ties are going to continue. 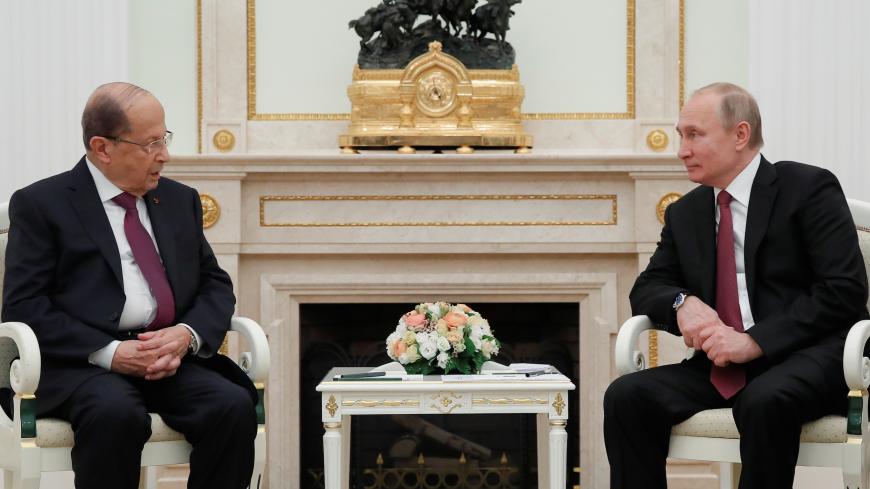 On March 26-27, Russian President Vladimir Putin hosted Lebanese President Michel Aoun in Moscow. It was the Lebanese president's first trip to Russia as a national leader, and only the third visit of a Lebanese president to Moscow in the history of bilateral relations.

During the two-day visit, Aoun met with, among others, Vyacheslav Volodin, the speaker of the State Duma, Metropolitan Hilarion, the chairman of the Department of External Church Relations of the Patriarchate of Moscow, and Igor Sechin, the chairman of Rosneft Corp. At the meeting with Putin, attended on the Russian side by Russian Foreign Minister Sergey Lavrov, presidential aide Yuri Ushakov and Economy Minister Maxim Oreshkin, the Lebanese president was accompanied by his son-in-law, Foreign Minister Gebran Bassil, and daughter, Mireille Aoun al-Hashem, who works as a senior presidential adviser.

Aoun’s trip was timed with the commemoration of the 75th anniversary of the establishment of diplomatic relations between Moscow and Beirut. Despite dynamic political contacts, trade and economic cooperation between Russia and Lebanon remains underdeveloped. Trade flow between the two sides in 2018 amounted to $470 million, decreasing by about 26% compared with the previous year, when it stood at $634 million.

At the same time, Russia and Lebanon have expanded their partnership in the oil and gas industry. In December 2017, Novatek, a Russian gas corporation taking part in a consortium with the French multinational Total and and the Italian multinational Eni, won a tender for exploitation of gas fields 4 and 9 situated on the Lebanese shelf. In January 2019, Rosneft and the Lebanese Ministry of Energy and Water Resources signed an agreement according to which the Russian company will take up operational management of an oil storage terminal in the Lebanese port of Tripoli for the next 20 years.

However, military-technical cooperation between the countries has lagged — quite understandably, considering longstanding US-Lebanon military ties. Certain small-scale contracts in this domain are, however, being discussed. In an interview with the Russian TV network RT on the topic of aid for the Lebanese army from Russia, Bassil said that “while Lebanon is not able to buy weapons, if Russia is willing to provide aid like we receive from the US, we will not object — as long as it is unconditional.”

The message was read in Moscow that Beirut does not want progress in bilateral ties with Moscow to come at the expense of relations with Washington.

Issues involving Christianity were particularly important on the agenda of the talks.

“We maintain relations with the leaders of your country and representatives of different political forces and religions. We are happy to see you in Moscow both as the president of the country and a representative of the Christian community,” Putin said in his opening remarks.

“We highly value the position of Russia, [regarding] your stance in defense of religious minorities in the East. It goes without saying that we are living through hard times now and would therefore like to have your support,” he said.

Shortly before the visit, Aoun told Russian reporters that he had been looking forward to the trip and hoped to receive support for his idea to create a World Center for Inter-Civilization Dialogue in Lebanon under UNESCO’s patronage.

Although the politician’s requests were not addressed in public, it seems likely that Moscow appreciated this idea, considering the issue’s popularity among Russian elites.

Aoun arrived in Moscow less than one week after US Secretary of State Mike Pompeo visited Beirut. Pompeo arrived in the Lebanese capital just one day after the public declaration of President Donald Trump’s intent to acknowledge Israel’s sovereignty over the Golan Heights. Pompeo’s asks on Hezbollah, as well as the statement on the Golan, were not well received by Lebanon’s political leaders. A discussion of the repatriation of Syrian refugees did not appear to gain traction.

The joint statement of the Russian and Lebanese leaders reflects areas of agreement by the two presidents on many of the regional issues. From the situation in Syria and Iraq, to the Israeli-Palestinian conflict to the Iranian nuclear problem — both Russia and Lebanon sought to emphasize adherence to international law and respect for the territorial integrity of any nation.

A separate paragraph of the statement was dedicated to the refugee problem. Prior to the Moscow visit, it was believed that the issue would dominate the agenda of the two presidents: Concrete proposals on the timeline and procedure for the return of Syrian refugees from Lebanon to their homes in Syria were expected to be discussed. Interestingly, Putin did not raise the Golan issue, and it was not part of the statement.

According to the final communique, Russia and Lebanon agreed to “support the efforts to repatriate Syrian refugees and the internally displaced, made within the framework of Russian initiatives," and “the solution to this problem is directly linked to the creation of beneficial conditions, including social and economic ones, in Syria itself, achieved by the post-conflict reconstruction process." To reach this goal, the presidents asked the international community, the UN and and humanitarian structures for further cooperation.

The main issue here is that even the part of Lebanese society that believes most firmly in immediate repatriation and revival of contacts with Damascus understands that the Russian plan to return the refugees, even with Beirut's support, cannot be implemented without outside assistance and financial aid — such as from Europe and the Gulf, if not the United States. The authorities in Moscow also acknowledge this fact; hence the pledge to the international community was included in the final statement for a solid reason.

Another challenge in implementing the Russian refugee plan is the position of Damascus. In the wake of Aoun’s visit to Moscow, Lebanese media outlets reprinted excerpts from a story first published by Al-Hayat arguing that Syrian President Bashar al-Assad may be stalling on the Russian initiative. According to Al-Monitor’s own sources, refugees and internally displaced people, including those living in the Rukban camp, indeed suffer from common problems with regard to their refugee living conditions and complications for their return to Syria. The Russian side has already encountered the Syrian government’s resistance to some of Moscow’s large-scale projects. For Damascus, the repatriation of such an enormous number of people will cause the Syrian government a wide range of challenges — legal, financial and security-related. It is not only about the refugees being afraid to return home due to the threat of repression — it is also about the Syrian government’s fear of the influx of large numbers of people, as it faces many challenges to deliver needed services to those already in the country. As a result, Syria's neighbors that have accepted the largest number of refugees are concerned that the Syrians will continue to stay in their countries. Moscow, for its part, will likely lack resources to implement its plan on its own. In this context, the only opportunity to solve the problem is to find some allies.

For instance, during the talks with Aoun, Volodin suggested holding a conference in Beirut aimed at bringing together members of parliaments from Russia, Europe, Turkey, Iran, Syria and other interested countries to discuss the problem of refugees and the resolution of the Syrian conflict.

In general, the statements both Aoun and Bassil made in Moscow reflected an awareness that progress in relations with Moscow, with which here there are many areas of agreement, should not come at the expense of ties with the United States, with which it also maintains a strong and vital relationship. Moreover, the fact that Moscow avoided publicly discussing the American views on the Golan Heights dispute in the presence of Aoun and refrained from criticizing the West openly perhaps made Beirut more certain that Russia would not seek to put Lebanon on the spot, thus allowing continuing cooperation with Moscow on many issues well worth pursuing.