Pentagon blames Turkey for strikes near US troops in Syria

The Pentagon held Turkey responsible for shelling American units in the Syrian city of Kobani on Friday, in spite of denials from Ankara. 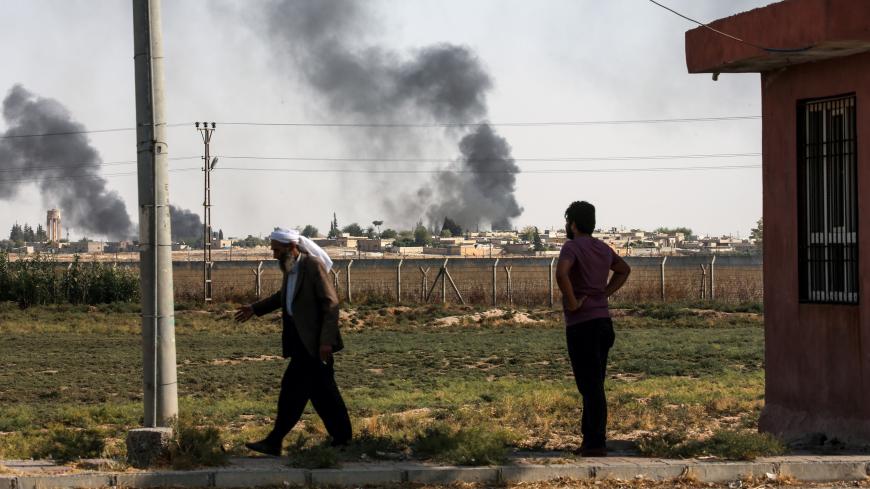 The Pentagon held Turkey responsible for shelling American units in the Syrian city of Kobani on Friday, highlighting risks to US forces after President Donald Trump allowed Turkey to launch attacks into northeastern Syria.

“US troops in the vicinity of Kobani came under artillery fire from Turkish positions,” said Navy Capt. Brook DeWalt, the Pentagon’s director of press operations. “The explosion occurred within a few hundred meters of a location outside the Security Mechanism zone and in an area known by the Turks to have US forces present.”

The American troops in question are safe and no artillery fire has been reported in the area since the attack, which took place at nine o’clock on Friday in Kobani, DeWalt said. The US does not plan to withdraw units from the area. A Syrian Democratic Forces (SDF) official speaking not for attribution to Al-Monitor confirmed that no coalition forces had been harmed.

But the Pentagon, which said Ankara knew that US forces were present at the position just outside the one-time ‘safe zone,’ appeared to push back strongly against denials from Turkey.

The Turkish Defense Ministry said in a statement that the firing was conducted in self-defense after outposts on Turkey's side of the border came under mortar fire; the statement also said that Turkish officials "firmly reject" claims that forces from the United States or the American-led coalition were fired upon.

News of the incident came barely three hours after US Defense Secretary Mark Esper told reporters today that the Pentagon had "relocated a small contingent of less than 50 special operations soldiers out of the immediate zone of attack."

"The Turkish military is fully aware down to grid-coordinate detail of the location of US forces,” the chairman of the US Joint Chiefs of Staff, Gen. Mark Milley, said today. “We have been in coordination with them to make sure they know exactly where US forces are throughout Syria.”

A defense official told Al-Monitor that those locations were Ras al-Ain and Tell Abyad on Syria’s northern border with Turkey, but said other nearby units remained on the frontier.

It’s not the first time American units have come under Turkish fire since units deployed to Syria to train Kurdish forces to defeat the Islamic State (IS) in 2015. Until the United States and Turkey agreed to joint patrols in the contested Syrian city of Manbij last year, Ankara-backed units would often take aim at American convoys.

It was not clear whether the United States would take any additional measures to defend US forces; the Kurdish-dominated Syrian Democratic Forces have provided American troops with extensive escorts, intelligence and protection on the ground in Syria.

The Trump administration has insisted that it is keeping an American presence in Syria to defeat IS, even though Turkey’s assault has forced a halt to the campaign against the terror group.

Esper “strongly encouraged Turkey to discontinue actions in northeastern Syria,” according to a readout of a call with his Turkish counterpart Hulusi Akar on Thursday, but said today that the Turks were “unwilling” to stop the offensive, despite American prodding.

“Ultimately, I will not place American service members in the middle of a long-standing conflict between the Turks and the Kurds,” Esper said. “This is not why we are in Syria.”

Treasury Secretary Steven Mnuchin also said the United States had developed new authorities to target Turkey with sanctions over the incursion. The administration has yet to levy automatic penalties on Turkey for taking delivery of the Russian S-400 air defense system in July.

Ahead of a long weekend in Washington, members of Congress worried that the Trump administration could order a quick pullout of approximately 1,000 troops in Syria, causing further instability.

Rep. Tom Malinowski, D-N.J., today appeared set to reintroduce a bill in the House that would stop the Trump administration from cutting American forces below that number until the White House details the impacts of the changes on US national security.

“President Trump’s unilateral decision last week to draw back US presence from northern Syria puts anti-ISIS partners, Syrian civilians, and US national security interests at risk,” Malinowski, a former assistant secretary of state during the Barack Obama administration, wrote in a letter to colleagues seen by Al-Monitor. “By acceding to Turkey’s incursion, the President casts aside months of diplomatic negotiations by the State Department and the Pentagon for a workable solution to Turkey’s concerns and opened the door to widespread ethnic conflict.”