Iraqi base housing US troops hit as Iran tensions escalate

Iran launched an attack against Iraqi bases housing American troops with over a dozen ballistic missiles. 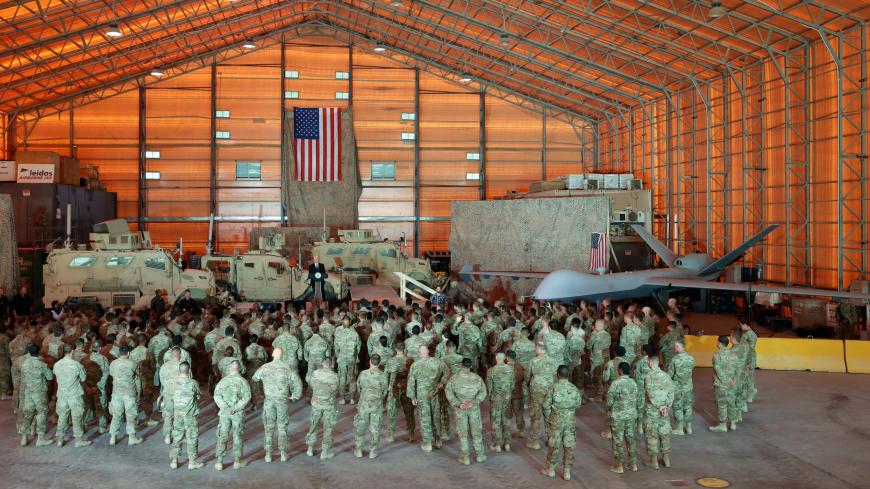 A drone and armored vehicles serve as a backdrop as US Vice President Mike Pence delivers remarks to US troops at Al-Asad Air Base, Iraq, Nov. 23, 2019. - REUTERS/Jonathan Ernst

Iran launched an attack against Iraqi bases housing American troops with over a dozen ballistic missiles tonight, the Pentagon said, in a significant escalation of long-simmering tensions after a US drone strike killed an Iranian military leader last week.

“It is clear that these missiles were launched from Iran and targeted at least two Iraqi military bases hosting US military and coalition personnel at Al-Asad and Irbil [Erbil],” Chief Pentagon Spokesman Jonathan Hoffman said in a statement. “As we evaluate the situation and our response, we will take all necessary measures to protect and defend US personnel, partners, and allies in the region.”

The bases had already been on high alert due to indications of a planned Iranian attack, Hoffman said, but the Pentagon did not immediately have assessments of damage or casualties from the attack, which was launched from inside Iran.

A US defense official told Al-Monitor that Al-Asad, which houses a significant contingent of counter-Islamic State coalition troops was hit with at least six rockets during an ongoing attack. CNN later reported that 10 projectiles had hit the base.

The base holds particular significance, since President Trump visited the installation in December 2018 in his first trip to see American troops overseas as commander in chief. Trump later caused controversy in March by stating in a TV interview that the US could leave troops in Iraq to ‘watch’ Iran after the campaign to defeat IS ended, prompting calls in Iraq’s parliament for the United States to withdraw. Vice President Mike Pence has also traveled to the base.

The United States has previously suspected Iran-backed attacks, such as the Dec. 27 strike that American officials pinned on Kataib Hezbollah, had used short-range Katyusha rockets. In recent days, mortar fire had also landed near US installations and in Baghdad’s secure Green Zone.

Earlier today, US Defense Secretary Mark Esper said he hoped Iran would de-escalate tensions after the strike that killed Soleimani, the head of Iran’s elite Quds Force. But the Pentagon chief said the United States expected Iran to retaliate for the attack, which Tehran deemed an act of terror.

“I think we should expect that they would retaliate through some way, shape or form,” Esper said. "What happens next depends on them."