Defense Secretary Mark Esper says the United States will be withdrawing all troops from northeastern Syria and that he expects Syrian Kurds to seek aid from Russia and Syrian President Bashar al-Assad. 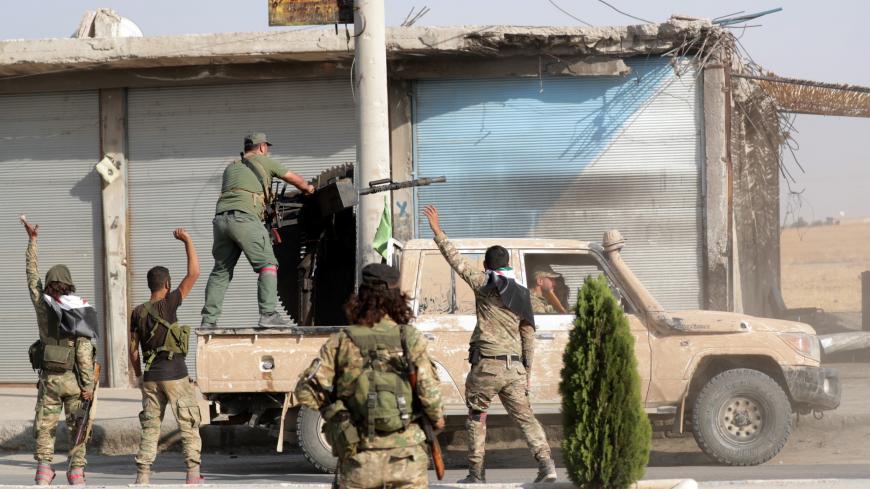 Turkey-backed Syrian fighters gesture as their comrade fires a weapon mounted on a truck in the town of Tell Abyad, Syria, Oct. 13, 2019. - REUTERS/Khalil Ashawi

A top US official announced today that the United States would be pulling out all of its forces from northeastern Syria, leaving its Syrian Kurdish allies exposed to Turkey’s ongoing military offensive as it entered its fifth day — a move that will likely go down as a further betrayal of the Kurdish people by the United States.

Secretary of Defense Mark Esper told CBS News that around 1,000 US troops deployed in the Kurdish-controlled zone to combat the Islamic State (IS) will be evacuating the area covering around a third of Syria. “It's a very untenable situation. I spoke with the president last night after discussions with the rest of the national security team and he directed that we begin a deliberate withdrawal of forces from Syria,” Esper said, adding that he expected Turkey to expand its attack farther south than planned and that the Kurds were likely to turn to Russia and Syrian President Bashar al-Assad for help.

Trump has ordered the Pentagon to withdraw all forces from Syria except for a small garrison in al-Tanf near the Jordanian and Iraqi border, Al-Monitor has learned.

There was no formal reaction from either Turkey or the US-backed Syrian Democratic Forces (SDF) as Al-Monitor went to press.

President Donald Trump has yet to formally confirm the withdrawal but noted in his Twitter feed today, “Very smart not to be involved in the intense fighting along the Turkish Border, for a change. Those that mistakenly got us into the Middle east Wars are still pushing to fight.”

In a further twist, Trump hinted that Turkey would be sanctioned for its actions. Trump said he had been dealing with his close ally Lindsey Graham, a Republican senator from South Carolina, to impose "powerful sanctions on Turkey. Treasury is ready to go, additional legislation may be sought. There is great consensus on this. Turkey has asked that it not be done. Stay tuned."

The Kurds have been lobbying hard to get the White House for more support, including a no fly zone over their territory, but to little effect.

In messages relayed through Esper and Secretary of State Mike Pompeo on Saturday, Gen. Mazlum Kobane, the commander in chief of the US-backed Syrian Democratic Forces (SDF), made a last-ditch appeal for Trump to provide "any military assistance" to stop the Turkish offensive, a US official told Al-Monitor. Trump denied the SDF request and also refused to call Turkish President Recep Tayyip Erdogan after Turkish-backed forces bracketed US troops with artillery fire in Kobani on Friday, the official, speaking on condition of anonymity in order to speak freely, said.

The official was referring to Friday’s incident in the Syrian border town of Kobani where US forces came under Turkish artillery fire and managed to escape unharmed. Turkey denied that it had deliberately targeted the forces, saying it was acting in self defense. But various US officials, speaking not for attribution, insisted that Turkey knew where they were and were seeking to push US forces out of the area. If so, the tactic worked.

The United States has done little so far to prevent the Turkish offensive despite a steady flow of congressional bills threatening to sanction Turkey and Friday’s announcement that Trump would sign an executive order sanctioning Turkish officials and entities who, among other things, were responsible for “indiscriminate targeting of civilians, targeting of civilian infrastructure, targeting of ethnic or religious minorities, or targeting or other actions that undermine the continued counterterrorism activities” of the US-backed Syrian Kurds. Trump was likely referring to this measure in today’s tweet about sanctioning Turkey.

The US official who had spoken about Trump's denial of the SDF request for help said this means that Russia and the Syrian regime are the SDF's only option. "We believe they will move in," the official said. The Pentagon has about 1,000 troops in the country.

There are unconfirmed reports that the SDF has struck an agreement with the Syrian government to allow regime forces into Kobani and Manbij, part of a broader deal that would see regime and Russian forces enter the region to halt the Turkish advance. But a senior SDF official told Al-Monitor, “Nothing is confirmed as yet."

He said, however, that the SDF was in talks with Syrian regime officials in the border town of Qamishli, where the regime maintains a small presence, including control over the airport. The official said the SDF was ready to let regime forces take control over the border areas provided the Kurds were allowed to maintain control over urban areas. But with the Americans packing out, the leverage of the Kurds has shrunk and it is unlikely they can dictate any terms. The Kurds do have one last card to play, however: to offer to help regime forces fight jihadis entrenched in Idlib, the sole remaining Arab rebel stronghold on the Turkish border where Turkish observer forces are stationed.

Ilham Ahmed, the co-chair of the SDF-linked Syrian Democratic Council and the Syrian Kurdish administration’s top diplomat, is in Cairo conducting separate talks, the official said, but declined to elaborate.

Esper’s announcement of a full withdrawal follows news that US forces had pulled back today from a third Kurdish-controlled town, Ain Issa, as Turkish-backed forces advanced deeper inside Syrian territory. The withdrawal from Ain Issa, 20 miles (32 kilometers) south of the Turkish border, served as a forewarning for today’s announcement of a full withdrawal. The town served as the headquarters for Kobane and was a main supply hub for US forces in the region.

An unconfirmed number of relatives of IS fighters’ relatives reportedly fled a Kurdish-run detention center near Ain Issa today as Turkish fighter jets struck the area.

Meanwhile, as the Trump administration weighs withdrawal options, officials say the American military’s lines of communications and resupply may become increasingly untenable, making it difficult to get US troops out of the country. ‘Those lines are becoming less and less secure,” said the US official who had spoken about Trump's denial of the SDF request for help.

Today’s announcement marks a U-turn from Esper’s remarks in a joint news conference Friday with Army Gen. Mark A. Milley, the chairman of the Joint Chiefs of Staff, in which it was said that the United States would not be abandoning its Syrian Kurdish partners.

"We are still collocated with the SDF, with the exception of two small outposts we were forced from in a force-protection mode," Milley said. "The entire frontage of the Turkish-Syrian border is about 440 kilometers [275 miles]; the area of the Turkish incursion is about 120 kilometers [75 miles]. Elsewhere in Syria, [US troops] are still collocated with them.”

Well-informed sources with close knowledge of the administration’s policymaking told Al-Monitor the writing has been on the wall for some time. Many said the Kurds had been misled by Trump's Syria team led by ambassador James Jeffrey. They noted that Trump had made his intention to leave Syria crystal clear from the outset and that even though he suspended his decision to withdraw all US forces in December 2018, he never changed it.

Yet his Syria team continued to insist publicly and in private with SDF officials that US troops would stay "indefinitely.” This in turn enraged Ankara, which had been told that the US relationship with the SDF — Turkish officials call the SDF terrorists because of the group's links with the Kurdistan Workers Party (PKK), which has been waging a bloody insurgency inside Turkey since 1984 — was “transactional, temporary and tactical.” Trump appeared to side with Turkey today, tweeting, “Turkey considers the PKK to be the worst terrorists of all. Others may want to come in and fight for one side or the other. Let them. We are monitoring the situation closely. Endless Wars!”

At the same time, the Syria team pressed Kobane not to trade or engage politically with the Syrian regime. “The policy was to isolate the regime and they used the SDF as a pawn with no cover from Trump,” one of the sources said.

“Even worse,” the source added, was the so-called security mechanism launched between Turkey and the United States last month to allay Turkey’s concerns about the SDF. Under the terms of the agreement, which was supposed to hold Turkish forces at bay, the Kurds destroyed their own defenses and pulled back their heavy weapons and men, paving the way for Turkey’s incursion.

Aaron Stein, the director of the Philadelphia-based Foreign Policy Research Institute who closely monitors the Syrian conflict, said, “"For three years we have kidded ourselves about this, and those that pushed policies at odds with Trump, working to sketch out a maximalist policy that ignored Ankara’s obvious intent, and the wishes of the world’s most powerful man, should be ashamed."

Meanwhile, Turkish troops and their Syrian Arab opposition allies continued to clash with SDF forces in and around the border towns of Tell Abyad and Ras al-Ain. The Turkish Defense Ministry said it had won full control over Ras al-Ain and of the strategic M4 highway, thereby disrupting supply lines between Kurdish forces in Kobani, Hasakah and Manbij. Erdogan rejected the idea of any talks with the SDF today, saying Turkey would not “negotiate with terrorists.” He said Turkey would not stop until the Syrian Kurdish forces pull back some 20 miles from the Turkish border. Aid agencies are warning of a humanitarian disaster. The UN says over 130,000 people have been displaced so far and that up to 400,000 people may be in need of assistance.

Erdogan also slammed Turkey’s Western allies for opposing the offensive. Germany, Finland, Norway and the Netherlands said they had halted arms sales to Turkey over the assault amid chilling reports of rights abuses by Turkish-backed Syrian opposition forces. The Arab League has also called Ankara’s offensive “an invasion of an Arab state’s land and aggression of its sovereignty.”

On Saturday, Turkish-backed Syrian fighters were caught on video summarily executing two SDF captives, shouting “God is Great” and calling their victims “pigs.” A Syrian Kurdish politician, Hervin Khalaf, was also murdered on the main road after Turkish-allied Arab fighters attacked her armored car. Khalaf, 35 was the leader of the Syrian Future movement, a party formed in November with US backing to bring together Kurds and Arabs. “She was a very kind,” said a former coalition official who had met Khalaf.

Today, nine civilians, including two Kurdish journalists, were reportedly hit by a Turkish airstrike as they were traveling in a convoy near Ras al-Ain. As of yesterday at least 38 civilians were said to have been killed in Syria and 11 in Turkey as a result of the conflict, the London-based Observatory for Human Rights and Turkish media reported.