The leader of the US-backed Syrian Democratic Forces called on the United States and Russian to stop what he called Turkey's "policy of massacres against the Kurds" after last night's drone strike. 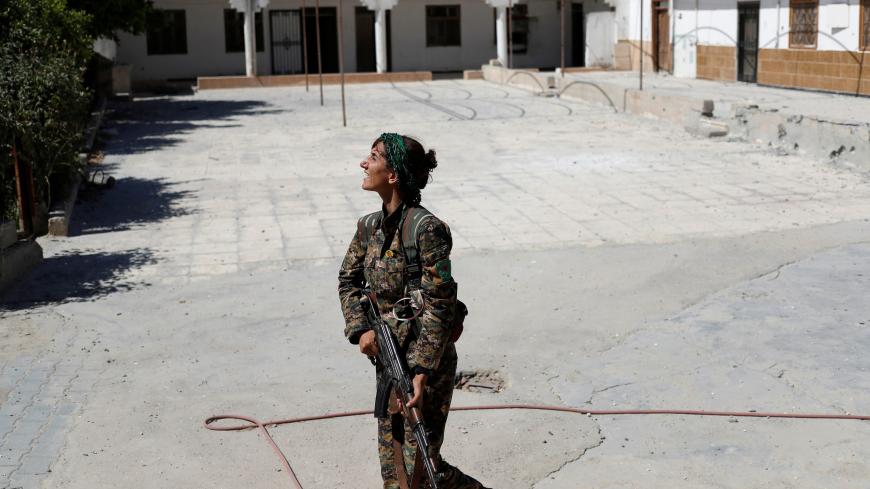 The leader of a US-backed militia in northeast Syria accused Turkey of violating the terms of two separate cease-fire agreements brokered by Russia and the United States today after an alleged Turkish drone struck his native village of Helenj, near the town of Kobani, killing three women last night.

Mazlum Kobane, the commander of the Syrian Democratic Forces (SDF), called the drone attack that took place around 7 p.m. local time “a continuation of the policy of massacres against the Kurds.” He added via Twitter, “Stopping Turkish violations and the policy of ethnic cleansing is a responsibility and duty of America and Russia, within the framework of the October agreements and international law.”

Kobane was referring to the accords brokered in the aftermath of Turkey’s Oct. 9 “Operation Peace Spring” assault against northeast Syria that resulted in its occupation of a swath of territory between the towns of Tell Abyad and Ras al-Ain and the withdrawal of US forces from the Syrian-Turkish border, including from Kobani.

In a rare if oblique rebuke of America’s NATO ally, Secretary of State Mike Pompeo expressed his sympathies to families of the "innocent civilians and those wounded" in the airstrike via Twitter just hours after the attack occurred.

But in an apparent bid to keep things even, Pompeo also mentioned the families of five civilians who died in a bomb attack that took place yesterday near Ras al-Ain that Turkey blamed on the SDF. Pompeo did not identify any perpetrators in his tweet, but it will have likely angered Ankara nonetheless.

Salih Muslim, the deputy co-chair of the Democratic Union Party (PYD), which holds power in the Syrian Kurds’ Autonomous Administration, told Al-Monitor that Russia was responsible for protecting Kobani now that the Americans are gone. “Turkey cannot operate in the skies over Kobani without their assent,” he said. “Though we don’t know their role in this particular instance, we’ve seen them look the other way when Turkey has attacked the area in the past.” Moscow has not commented officially on the strike.

Stanislav Ivanov, a former colonel in the Russian army and a Syria expert, refuted the idea that Russia would have greenlit the attack, saying Turkey never sought Moscow’s permission for its attacks conducted “under the pretext of fighting Kurdish militias." He likened Turkey’s actions to “acts of state terrorism” in emailed comments to Al-Monitor, adding, “in this case, the deaths of three women from among local residents.”

Ankara has yet to claim responsibility, though it routinely trumpets targeted assassinations of men and women militants linked to the Kurdistan Workers Party (PKK), which has been fighting the Turkish government for Kurdish self-rule since 1984. Fighting has escalated since a two-and-a-half-year cease-fire broke down in 2015. Turkey is currently engaged in twin air and ground offensives against the PKK in their stronghold in Kurdish-controlled northern Iraq.

Turkey insists that the SDF’s Kurdish component known as the People’s Protection Units (YPG) are legitimate targets as well, because of its historical links with the PKK.

A Turkish soldier was killed yesterday near the mainly Kurdish town of Yuksekova after coming under attack from the Iranian side of the border. The Turkish Ministry of Defense did not assign blame, but the PKK is active inside Iran as well.

In Kobani, thousands of citizens chanting anti-Turkey slogans gathered in the town’s main square today to air their fury over the drone strike.

The victims of Tuesday’s airstrike were named as Zehra Berkel, Mizgin Xelil and Emine Weysi. Berkel was a leading member of Kongra-Star, a confederation of women’s groups that promotes gender equality and helped mobilize women in the fight against the Islamic State. The 33-year-old, who studied law, was also a former co-mayor of Kobani. Xelil, who was reportedly undergoing treatment for cancer, was active in Kongra Star and Weysi was married to a relative of the SDF chief. She was hosting a gathering outside their family home in Helenj.

It’s unclear why the women were targeted. “None of them were involved in any armed activity,” said Muslim.

Meghan Bodette, a Washington-based international affairs specialist and a vocal advocate of the Kurdish feminist movement, argued that the choice of women was deliberate. “In Afrin, Ras al-Ain and Tell Abyad, one of the consequences of Turkish intervention has been the destruction of virtually all gains in rights, representation and empowerment made by women under the Autonomous Administration — accompanied by a pattern of kidnappings, forced marriages, torture and sexual violence carried out with impunity by Turkish-backed armed groups,” Bodette said in emailed comments to Al-Monitor. “Both the targeting of political figures like Zehra Berkel and Hevrin Khalaf and the daily fear of violence that women in occupied areas live with are part of a broader attempt to weaken the strongest and most effective women's movement in Syria.” Hevrin Khalaf was the young Kurdish woman politician who was summarily executed by members of a Turkish-backed Syrian rebel faction in the early days of Turkey’s Operation Peace Spring.

Some observers draw eerie parallels between the murder of three prominent Kurdish female activists in Paris in January 2013. The victims included Sakine Cansiz, the legendary former fighter who co-founded the PKK.

The murders were widely believed to have been planned by rogue elements in Turkey’s national security establishment to derail now defunct peace talks between the Turkish government and the PKK.

Muslim noted that there may be a link between yesterday’s attack and ongoing reconciliation talks between the PYD and the opposition Kurdish National Council that are being mediated by the United States. The talks were initiated by Kobani, who was added to Turkey’s list of most wanted terrorists following the collapse of the Kurdish peace talks in which he played a tangential role. The veteran commander has been the target of several assassination attempts allegedly planned by Turkish intelligence.

Turkey has aired occasional disgruntlement over the talks, mainly via its Foreign Minister Mevlut Cavusoglu, who told the Turkish news channel CNNTurk on May 18 that “anyone who cooperates with the PKK/YPG is a legitimate target.”

A well-placed Turkish source said that some members of Turkey’s ruling Justice and Development Party view the talks, however, as a vehicle to resume a détente with the Kurds — whose votes help tip elections — and to ease relations with the United States. But nationalists who oppose Kurdish rights and Kurdish unity wherever they scent any retain the upper hand. Yet, “No one within the Turkish government apparatus seems to be in a rush to take credit for the [Kobani] attack. The only ones praising it are pro-government social media trolls,” the source observed.

Kobani emerged as a symbol of Kurdish resistance against the Islamic State, which laid siege to the town in the fall of 2014 as Ankara looked on and even collaborated with the jihadis, Syrian Kurdish officials charge, until it was shamed into rising to the Kurds’ defense. Kobani is where the US-Kurdish partnership against the jihadis was forged, tilting Turkish-US relations into crisis with Ankara accusing Washington of arming and training what it called PKK terrorists.

Turkey has made no secret of its desire to add Kobani to the real estate it occupies inside northern Syria. Doing so would allow Turkey to fully connect the Euphrates Shield zone west of the Euphrates River with its freshly acquired dominion east of the river, giving it a further strategic edge. Russia, whose military police are deployed around Kobani along with regime forces, since the US retreat, wields the threat of a Turkish attack to press the Kurds into ditching the Americans and cutting a deal with the Syrian regime, but to little effect so far.