Turkey's invasion of northeastern Syria has changed the lives of Kurdish residents in myriad ways, from a bump in confidence-boosting cosmetic surgery to pervasive anxiety over whether Turkey will strike again. 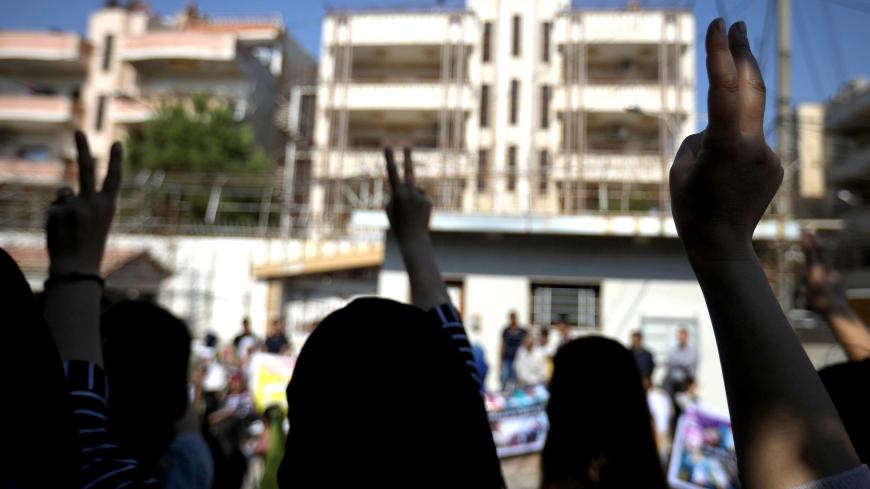 Kurdish and Arab protesters flash the victory sign and chant slogans against Turkish President Recep Tayip Erdogan during a protest in front of the UN headquarters in the town of Qamishli, Syria, Oct. 23, 2019. - REUTERS/Muhammad Hamed

QAMISHLI, Syria — In a small dark room in northeast Syria, women of all ages scan one another with a critical eye. Several have gauze bandages over their noses, others strips of plaster over their eyelids. They are waiting for Edip Mahmoud Ali, Qamishli’s most celebrated cosmetic surgeon, who is so overwhelmed by demand he no longer answers his telephone.

Fatima Mohammed Zain, the wife of a local policeman, has had her cheekbones chiseled and lips puffed into a permanent pout. “Here in Qamishli, rich or poor, people don’t care," she said. "If they want something they go for it.”

Hevin Maher, a bottle blonde in a leopard-print jumpsuit, brought her sister-in-law, a cheerful 58-year-old wearing a hijab, in for an eyelift. “We made the decision to be beautiful because it helps raise our spirits, it makes us feel more powerful," Maher said. "Because every day has become much harder since the Turkish operation.”

She was referring to Turkey’s Oct. 9 assault against the US-backed Syrian Democratic Forces (SDF). Turkey’s so-called Operation Peace Spring displaced tens of thousands of civilians and provoked a global outcry as Ankara’s jihadi allies murdered and plundered their way through the towns of Ras al-Ain and Tell Abyad, occupying both towns and the areas lying between them.

The United States said there was evidence of war crimes. Yet, amid all the fear and misery, the invasion has also ignited the sort of quiet defiance that competes with vanity in Dr. Ali’s chambers and that is palpable across much of the mainly Kurdish northeast.

“If the Turks come again, we are ready,” grinned Garo Iso, a matronly Kurd pulling out a Kalashnikov from under a stack of cushions in her living room. At least three other guns were similarly concealed in the rectangular space. Iso was celebrating her grandson’s birthday over cakes, kebabs, stuffed grape leaves and popcorn in their family home in Amude, the administrative capital of the autonomous administration of northeast Syria. 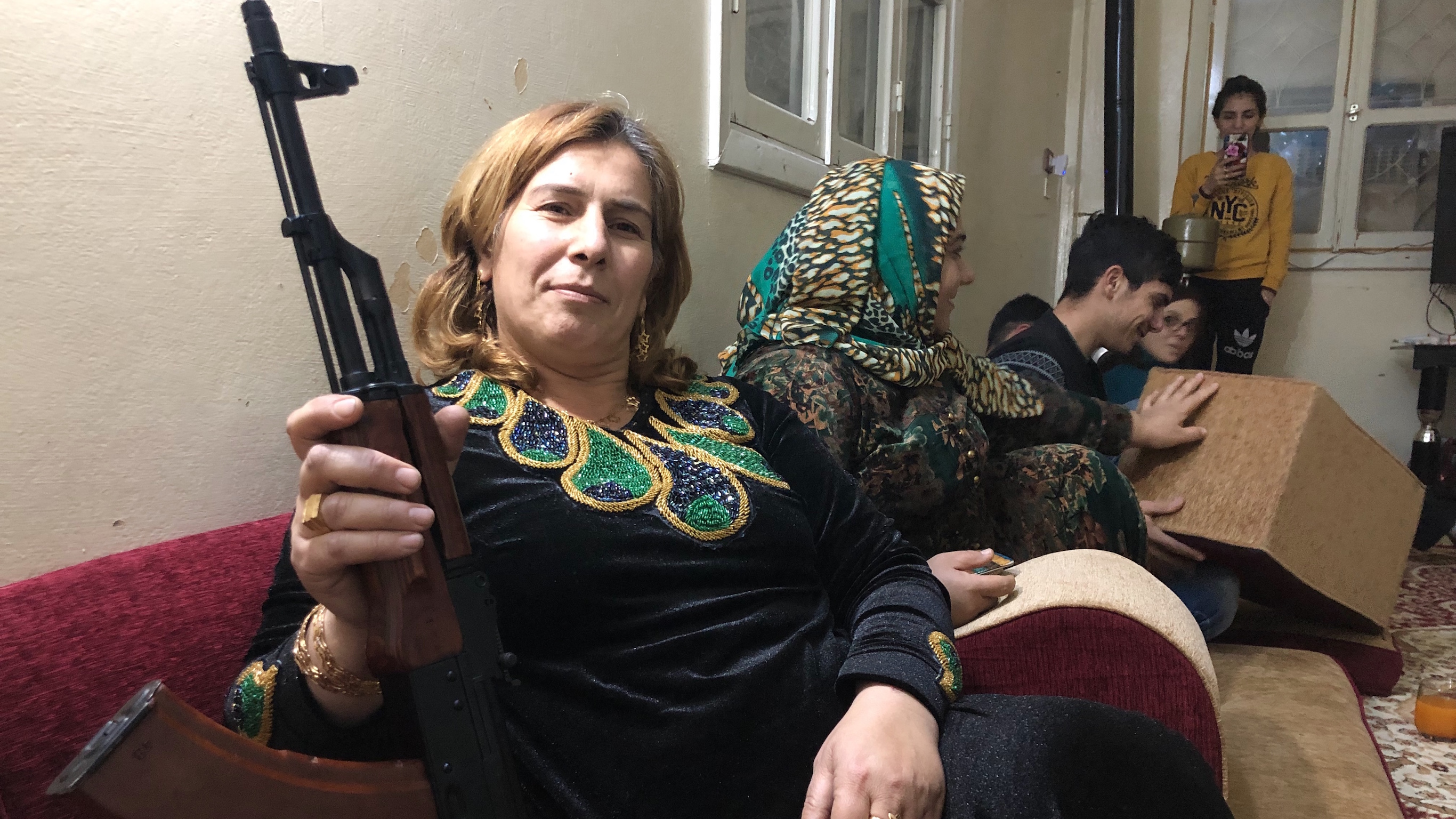 The guest of honor is Salih Muslim, the veteran Kurdish politician from Kobani, whose cuddly veneer belies a razor-sharp mind. Muslim currently runs external relations for the autonomous administration. This includes keeping ties with the Kurdish-controlled area’s Arab tribes on an even keel. “Everyone predicted the Arabs would abandon us when the Turks invaded,” he told Al-Monitor. “Instead, the Arabs were flooding me with telephone calls, asking if we were going to abandon them.”

When President Donald Trump told US forces to pull back, clearing the path for the Turkish attack, many predicted the collapse of the Kurds’ seven-year experiment with self-rule.

As Trump’s orders stood at the time, all US forces in northeast Syria were going home, casting their Kurdish partners, who fought with them against the Islamic State, at the mercy of Turkey and the Syrian regime. His U-turn in the face of congressional fury, with around 1,000 or so US forces redeployed away from the Turkish border to “secure the oil,” is the biggest reason the autonomous administration is still standing. But not the only one.

US forces have retreated from Arab majority areas such as Raqqa, the erstwhile capital of the Islamic State’s vanquished “caliphate,” along with Tabqa and Manbij. Despite sporadic protests, particularly over oil, local Arabs have remained largely loyal so far because the SDF is what stands between them and the return of the regime or Turkey.

Fawza Yusuf, a senior official in the autonomous administration’s top governing body, known as TEV-DEM, acknowledges that the security environment is much tougher. Her security detail, two female fighters who normally join her for interviews, stand guard over her car. “You never know if someone is going to plant a bomb,” she said. “We share our locations on a must-know only basis. We don’t let people bring their cellphones when meeting us. We know that Turkish intelligence is after us,” she said. “And so is Daesh,” Yusuf added, using the Arabic acronym for the Islamic State.

The number of checkpoints here has visibly increased. People rarely travel by night. Yet the Kurdish-run area remains the safest and most stable part of Syria. Life under Turkey and jihadis is the opposite — lawless — many former Ras al-Ain residents say.

The Washukane camp near Hasakah is home to nearly 7,000 people, most of them Arabs, fleeing Turkish forces in Ras al-Ain and its environs. On a recent afternoon, crowds of ragged internally displaced people gathered around a truck delivering crates of foodstuff.

Wafaa Dahan al-Salem, a mother of four, had freshly arrived from a village in the Tel Tamer countryside. “Armed people kicked us out of our house, then the clashes began," she said. "Before [Turkish President Recep Tayyip] Erdogan came, we had a good life. We had food, sheep, mazot [fuel]. We were safe. Now it's all blood and ruin.” Such sentiments were echoed among over a dozen camp residents interviewed by Al-Monitor.

Jamil Ahmed Smellah, a farmer, said, “I had 100 beehives. They [the Sunni rebel forces] told me I had to pay them $50 per beehive if I wanted to take them with me. They stole my home, my livelihood, everything. My life was 'mumtaz' before the Ottoman occupation,” Smellah said, using the Arabic word for “excellent.”

In the local bazaar in Amude, business is slow and the mood circumspect. Weddings have been postponed out of deference to the fallen, leaving jewelers in financial limbo. Rumors of a fresh Turkish invasion, fed by Erdogan’s threats, abound.

Salah Hasso, who runs a perfumery, believes the safest bet is for the regime to reassert its control. “As Kurds, of course, we want to keep our independence, but at the same time this prolonged uncertainty is bad for everyone,” he said.

A tailor who would only identify himself as Ahmad has seen his income halved because of the wilting Syrian pound. Dresses he stitched for $4 now only fetch $2. He sounded resigned: “Whoever comes and rules over us, will we say ‘welcome, father'?”

However, preserving the remaining chunks of northeastern Syria, which sits on the country’s economic spine — oil, water and wheat — has become a priority for the SDF’s commander in chief, Mazlum Kobane.

The coolly confident 52-year-old guerrilla turned diplomat is widely credited for keeping the administration on its feet. Close associates speaking not for attribution said he did not lose his nerve — “not even once” — throughout the Turkish invasion. He single-handedly struck an accord with the regime and the Russians to have their forces replace the Americans, but solely along the Turkish border and without ceding another inch of the administration’s land or authority.

“Our people continue to stand with us, to trust us fully,” Kobane told Al-Monitor in a recent interview.

The Syrian regime’s strategy is to separate the Arab areas from the Kurdish ones. Through the Russians, the regime has tried to cajole Kobane to discuss a deal that would cover the predominantly Kurdish areas and give the Kurds skimpy political and cultural rights that could be rescinded as the regime grows stronger.

But Kobane has set the bar high, some say impossibly so. He insists the SDF and the local governing structures in the northeast remain intact. Oil revenues from fields in Deir ez-Zor and Rmeilan help bankroll the administration, including over 100,000 members of the SDF and internal security forces known as the Asayish, bolstering Kobane's power under US protection. Some of the money, paradoxically, comes from oil smuggled to Turkey.

He appears to be playing the long game, hedging his bets. Perhaps like many here, Kobane is hoping that the elusiveness of any political settlement with Damascus will allow the northeast to settle into the quasi-independent status of neighboring Iraqi Kurdistan, albeit minus the formality accorded it by Iraq’s constitution. Yet Kobane is keenly aware that the US presence is on the clock and that Trump could spring withdrawal orders again, leaving him and the SDF horribly exposed.

As such, the SDF chief knows he can squeeze the most out of the Russians and Damascus while the Americans are still around. For the same reason, neither will engage with him seriously until the Americans go.

In the meantime, Kobane has embarked on a flurry of diplomacy, seeking to mend ties with Syrian Kurdish opposition rivals, courting the powerful Barzanis of Iraqi Kurdistan, hobnobbing with Gulf princes, and chatting with France’s Emmanuel Macron and President Trump, if only over the telephone. But he faces unremitting opposition at every turn from Ankara, which successfully blocked Kobane from traveling to Washington.

Turkey has placed a bounty on his head and a red notice for his arrest via Interpol on the grounds that Kobane is a terrorist. The accusation stems from Kobane’s past inside the outlawed Kurdistan Workers Party (PKK). The PKK has been fighting the Turkish army since 1984, initially for Kurdish independence and now political autonomy, and is on the US list of terrorist organizations. Turkey touted the SDF’s alleged ties to the PKK to justify its incursion.

Turkey is also hounding Muslim. Last year, Czech authorities in Prague briefly detained Muslim, who was attending a conference. Germany recently blocked his application for a Schengen visa, ostensibly to humor Turkey, Muslim said. “It means I will have to apply individually to EU countries, which is so time-consuming,” he told Al-Monitor. Ironically, both he and Kobane were among Turkey’s top interlocutors when a once dovish Erdogan was overseeing now-scrapped peace talks with the PKK.

Kobane acknowledged that he is worried Turkey might strike again.

He is especially nervous about the mainly Arab area east of al-Qahtaniyah, which is home to a small oil field. Erdogan has aired his interest in laying his hands on some oil to finance the construction of homes for Sunni Arabs displaced by regime attacks on the rebel-held province of Idlib and for Syrian refugees in Turkey.  These would be built in the areas Turkey recently occupied, and in Kurdish eyes amount to nothing less than ethnic cleansing. Erdogan is talking about resettling up to a million Syrians, hence he may feel compelled to grab more land, including the city of Kobani, because of its symbolism for the Kurds. But Russia may not prove so accommodating. Also, US forces are perilously close to the oil field, and Congress will surely push for a whole new raft of sanctions against Ankara.

Back in Qamishli, Dr. Ali finally emerges from his room. He has just performed rhinoplasty on a young woman whose nose is swathed in bloodstained gauze. Does he ever get requests from the fabled Kurdish woman fighters of the Women’s Protection Units, or YPJ? He nods toward his patient. She scowls. “For the YPJ and all our heroic fighters, treatment is free,” he said. “She asked me to write a report saying her nose was grazed by shrapnel, but I refused.”