Senate votes to end US involvement in Yemen war

The Senate voted to end US support for the Saudi-led coalition in Yemen. 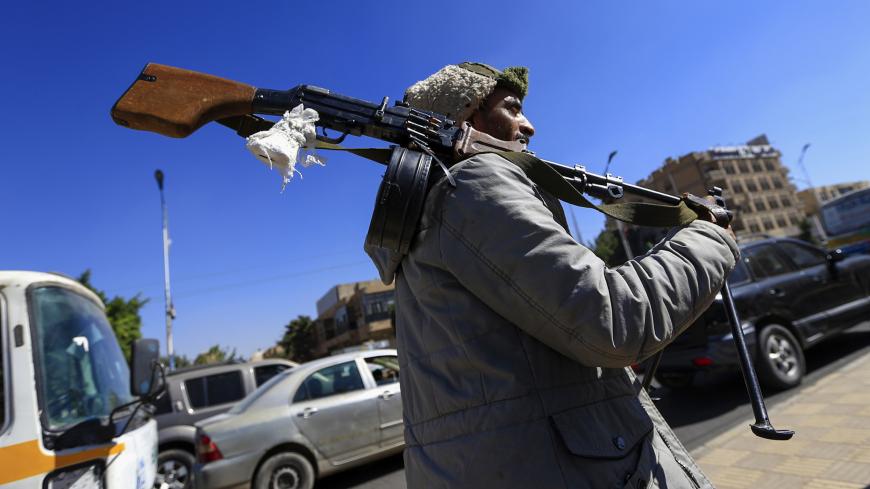 A Houthi rebel fighter carries a machine gun on his shoulder during a protest outside the United Nations office demanding the reopening of Sanaa airport, in the Yemeni capital, Sanaa, Dec. 10, 2018 - GETTY/Mohammed Huwais

The Senate voted 56-41 today to end US support for the Saudi-led coalition’s war against Yemen’s Houthi rebels, an unprecedented use of the 1973 War Powers Act.

The vote reflects Congress’ growing ire with Saudi Arabia over the massive humanitarian catastrophe in Yemen and Riyadh’s murder of journalist Jamal Khashoggi.

“I think we stand a chance today, for the first time, to use that War Powers Act to stop a war, and that is the horrific war in Yemen, which is destroying that country,” Sen. Bernie Sanders, I-Vt., who introduced the resolution, told reporters ahead of the vote. “The United States Congress is going to reassert its constitutional authority to be the body that makes war, not the president of the United States.”

A handful of Republicans joined Democrats to pass the resolution, defying leaders in their own party.

The resolution would permanently ban US midair refueling support for the Saudi coalition, which the Donald Trump administration ended last month. Sanders and many Democrats also believe it would force the Trump administration to end targeting assistance and logistical support for the coalition. Reports of US troops stationed on the Saudi-Yemeni border and a classified Defense Department operation that could involve US ground troops in anti-Houthi operations have raised further questions on Capitol Hill about the extent of US involvement in the war.

But Republican leaders in Congress oppose the resolution, arguing that US support for the coalition is necessary to counter Iran, which provides weapons and missiles that the Houthis use against civilian targets in Saudi Arabia.

“Every single member of this body shares grave concerns about the murder of Jamal Khashoggi and wants accountability,” Majority Leader Mitch McConnell, R-Ky., argued on the floor ahead of the vote. “We also want to preserve a 70-year partnership between the United States and Saudi Arabia.”

The resolution’s opponents also contend that US support for the coalition does not amount to “hostilities” as outlined in the War Powers Act.

“The United States is not involved in combat,” said McConnell. “It is not dropping ordnance. It is no longer even providing air-to-air refueling.”

To that end, Iran hawk Tom Cotton, R-Ark., attempted to water down the resolution with amendments that would have enabled the Trump administration to continue support for anti-Houthi operations, but he failed to secure enough votes. However, senators voted to adopt amendments offered by Majority Whip John Cornyn, R-Texas, that would require the Trump administration to report on the national security implications of withdrawing support from the Saudi coalition.

Even as the Senate’s historic vote marked a strong rebuke against the Saudi-led coalition, House Republican leaders managed to forestall the same vote in the lower chamber on Wednesday.

Although expedited procedures in the War Powers Act allow any lawmaker to force a floor vote on the resolution, House Republican leaders managed to quash the vote by stripping the resolution of its privileged status in an unrelated procedural vote on a farm bill.

“This is why people hate Congress,” tweeted Rep. Ro Khanna, D-Calif., who introduced the same resolution in the House. Khanna asserted that Speaker Paul Ryan, R-Wis., “is not allowing a vote on my resolution to stop the war in Yemen because many Republicans will vote with us and he will lose the vote.” Of the 98 co-sponsors on Khanna’s resolution, only four are Republicans.

As a result, the resolution cannot advance until Democrats take control of the House in January. The Senate will therefore have to vote again next year, but the prospects of successfully passing the resolution a second time remain uncertain with Republicans set to expand their majority in the upper chamber. Furthermore, Trump is likely to veto the resolution, contesting its legality.

Although his resolution is nonbinding, Corker implied that it is the most effective congressional response as it is most likely to pass both chambers without any legal hangups.

“Talk to people inside the Saudi government about all the efforts that are underway and ask them which one they worry most about,” Corker told reporters.

The retiring senator has also sought to amend another bill that would also ban US midair refueling for the anti-Houthi coalition. It would sanction Saudi officials and royal family members involved in Khashoggi’s assassination and in blocking humanitarian aid flows to Yemen, while also banning offensive arms sales to Saudi Arabia through 2020.

But the bill is at a standstill with the Foreign Relations Committee’s top Democrat, Sen. Bob Menendez, D-N.J., opposing Corker’s proposed amendments.

“Menendez has a very, very strong bill and I appreciate what he … and others have done on it,” said Corker. “He wants to keep this bill as munch intact as he can, because he knows it’s not likely to happen this year anyway. So, he’d just rather start the next year with a really strong bill, and I understand that.”

Sen. James Risch, R-Idaho, who will replace Corker as committee chairman in January, has not committed to advancing the Menendez bill. Risch has been much less critical of the Saudis and Trump’s close relationship with the crown prince than Corker.