Republicans want to codify President Donald Trump’s recognition of Israeli sovereignty over the Golan Heights into law, but even the staunchest pro-Israel Democrats have reservations. 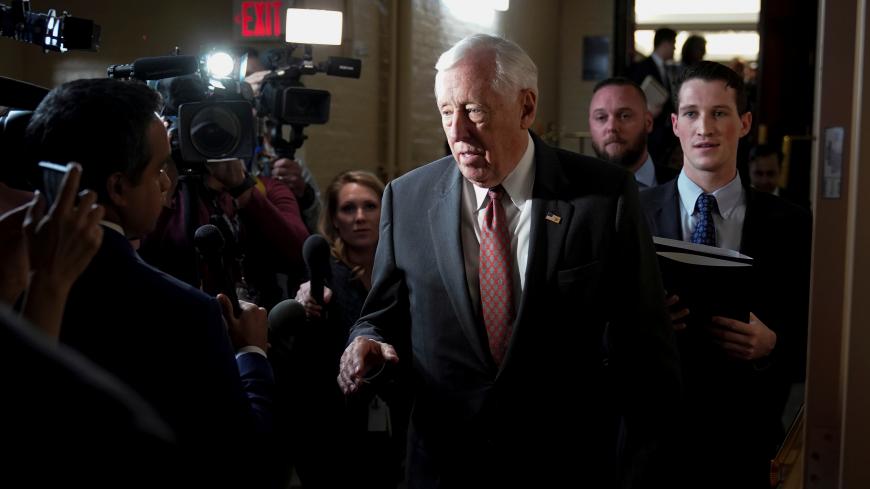 President Donald Trump may have sparked vocal condemnations from world leaders on Monday when he officially recognized Israel’s annexation of the Golan Heights, but another battle over the occupied territory is quietly shaping up on Capitol Hill.

Republicans are pushing their own bills that would make Trump’s decree permanent, preventing a future president from undoing it.

No Democrats have yet gotten on board in either the House or Senate, and today House Majority Leader Steny Hoyer, D-Md., threw cold water on the effort when asked by Al-Monitor.

“It’s another thing at a time when we’re trying to still bring peace — and I’m a very strong supporter of a two-state solution — to complicate that with actions which were seemingly unnecessary from any immediate demand or action to move Israel from its control of the Golan Heights,” the No. 2 leader in the House said at his weekly press briefing. “The president’s actions … seem to be more political than substantive.”

Meanwhile, liberal groups such as the Jewish Democratic Council of America have begun lining up against the bill.

“While JDCA does not question Israeli control of the Golan, we do question the timing of the president's decision to recognize Israeli sovereignty over the Golan, which appeared to be a political calculation,” the group said in an emailed statement. “We also believe that US policy toward Israel should remain a bipartisan issue. This is not a bipartisan bill.”

Hoyer, a staunch pro-Israel Democrat, made clear that he believes that “Israel’s control of the Golan Heights is absolutely essential for its security.” And he did not outright oppose the bill, which he said he had yet to read.

But his stated concerns for the potential impact on Israel-Palestinian talks could put a damper on efforts to make the bill bipartisan.

Rep. Mike Gallagher, R-Wis., introduced the bill in the House, where it has 23 Republican co-sponsors. Sen. Ted Cruz, R-Texas, leads the effort in the Senate and has so far attracted seven other Republicans.

One co-sponsor, Sen. Lindsey Graham R-S.C., penned an op-ed in the Wall Street Journal on Monday calling on Congress to “immediately vote on the legislation,” writing that “Mr. Trump’s decision could be undone by a future president who is a friend to Syria or a foe of Israel.”

Republicans have sought to paint Democrats as insufficiently supportive of Israel in recent months, largely over significant opposition in the party to legislation cracking down on the pro-Palestinian boycott, divestment and sanctions (BDS) movement. The push over the Golan Heights is shaping up to be the next partisan battle over Israel.

Neil Strauss, the digital director for the Republican Jewish Coalition, told Al-Monitor last week, “If Democrats are committed to bipartisan support for Israel, as they claim, they will get behind this effort.”

In a tweet, she called the move “shortsighted” and accused Trump and Netanyahu of “putting their own political interests ahead of the interests of our respective countries.”

Trump’s decision was well received, however, at the American Israel Public Affairs Committee’s (AIPAC) annual conference this week. Still, the pro-Israel lobby did not direct its activists to push lawmakers on the Golan Heights today when they made the rounds on Capitol Hill. (In another sign of the growing partisan division over Israel policy, AIPAC downgraded its anti-BDS push this year, simply asking for nonbinding resolutions condemning the movement.)

The House Foreign Affairs Committee declined to commit to taking up Gallagher’s bill when pressed, even though Chairman Eliot Engel, D-N.Y., has previously come out in support of recognizing Israeli sovereignty over the Golan.

In addition to permanently locking in Trump’s decree this week, the bill would include the Golan Heights as part of Israel in all spending and trade bills while authorizing joint scientific, industrial and agricultural projects in the occupied territory.

“The Syrian civil war and the resultant presence of extremists on Israel’s northern border, including Hezbollah, al-Qaeda and [the Islamic State], underscores the importance of Israeli control of this strategic area,” Engel told Al-Monitor in an emailed statement. “This is the reality of the situation, and there is no circumstance under which Israel should give that strategic advantage to the murderous [Bashar al-Assad] regime.”

Despite lobbying from Cruz and Graham, the Senate Foreign Relations Committee has also yet to schedule a markup. The office of Majority Leader Mitch McConnell, R-Ky., did not reply to Al-Monitor’s request for comment.

“The United States recognizes that the Golan is part of Israel,” said McConnell. “Period.”