President Donald Trump wants to immediately begin withdrawing US troops from Syria, but Iran hawks in Congress aren’t having it. 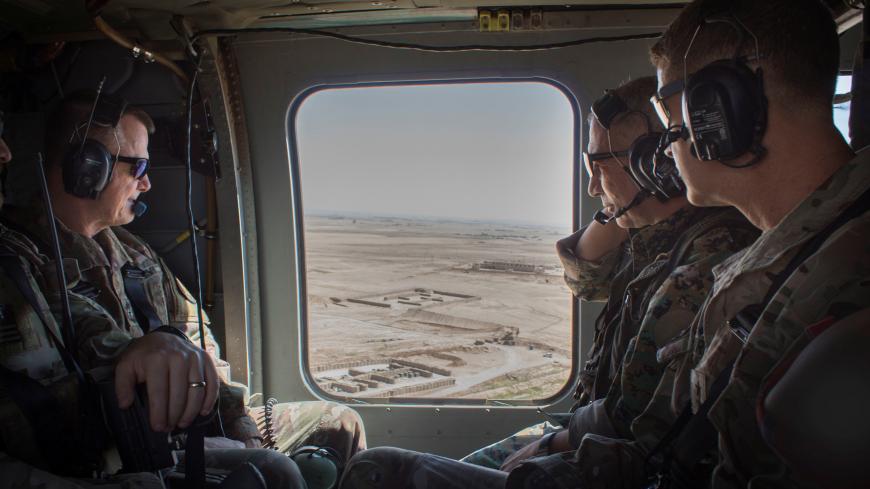 Iran hawks in Congress are vehemently pushing back against President Donald Trump’s directive to begin pulling US troops out of Syria.

CNN and the Wall Street Journal reported this morning that the administration has ordered the Pentagon to begin removing US service members “as quickly as possible.” And Reuters reports that the State Department is evacuating all its personnel within 24 hours.

The news sparked an immediate uproar among some of Trump’s usual allies on Capitol Hill, who were all caught off guard.

Sen. Lindsey Graham, R-S.C., issued a statement likening the pending removal of the 2,000 US troops stationed in Syria to President Barack Obama’s 2011 withdrawal from Iraq and the subsequent rise of the Islamic State (IS, also known as ISIS), calling it “a huge Obama-like mistake.”

Graham told reporters that he was “blindsided” by the announcement and demanded a briefing, noting that he had a meeting lined up with Defense Secretary James Mattis today. Senate Armed Services Committee Chairman James Inhofe, R-Okla., also expressed disappointment that the Trump administration did not notify Congress in advance.

Although the militant group’s would-be caliphate has collapsed, the group still maintains small slivers of territory in eastern Syria. Yet shortly after the initial media reports, Trump declared mission accomplished, tweeting, “We have defeated ISIS in Syria, my only reason for being there during the Trump Presidency.”

“Iran is rejoicing right now,” tweeted Kinzinger, an Iraq war veteran. “We left Iraq, and had to come back. I would sure hope the President and his advisers are smarter than this.”

As lawmakers clamored for clarity on logistics and details of the withdrawal, Senate Foreign Relations Committee Chairman Bob Corker, R-Tenn., noted that Republican leaders were giving Vice President Mike Pence “an earful” over the decision during a lunch on Capitol Hill.

A White House call with reporters did little to shed light on the decision or provide details on how the Trump administration intends to eliminate the remnants of IS and ensure the group doesn’t return. The Pentagon referred basic questions on timing, logistics and extent of the withdrawal to the National Security Council, which referred reporters back to the Pentagon as it did not have the information immediately available.

However, a senior administration official did note that the exact timeline for withdrawal was still “being designed.”

The looming withdrawal comes as Turkish President Recep Tayyip Erdogan has threatened to launch an offensive against US-backed Kurdish forces in eastern Syria. Trump and Erdogan discussed Turkey’s threats on the phone on Friday. And on Tuesday the Trump administration announced a $3.5 billion arms sale to Turkey, including 80 Patriot missiles.

But the White House was unclear as to how extensively the two leaders discussed the Syria withdrawal.

“It was not something he had discussed with President Erdogan,” said the senior administration official,” before adding that Trump “had informed President Erdogan as a neighbor of Syria obviously.”

In addition to troops supporting Kurdish fighters in northeastern Syria, the United States maintains a garrison of soldiers at al-Tanf in an effort to thwart Tehran’s endeavors to establish a land bridge from Iran to Lebanon.

A US withdrawal, Graham wrote, “will also be seen by Iran and other bad actors as a sign of American weakness in the efforts to contain Iranian expansion.”

Sen. Marco Rubio, R-Fla., also weighed in, tweeting that a “full and rapid withdrawal from Syria is a grave error with broader implications” beyond the campaign against IS.

“This turns Syria over to Iran entirely,” Rubio told Al-Monitor. “They’ll now use that opportunity to help Hezbollah even more, particularly in southern Syria.”

Democrats also unanimously criticized Trump’s handling of the situation, even as they remain divided on the merits of keeping US ground troops in Syria.

Incoming House Speaker Nancy Pelosi, D-Calif., called the withdrawal “premature” and asked why it was not done “in the context of advancing peace negotiations.”

“The precipitous withdrawal leaves scores of unanswered questions, most pressingly about how the administration plans to ensure the defeat of ISIS,” incoming House Foreign Affairs Chairman Eliot Engel, D-N.Y., said in a statement, noting that it “cedes influence” to Russia and Iran. However, Engel also raised questions about the legality of US military activity in Syria, calling on Trump to consult with Congress on the use of military force.

Rep. Ted Deutch, D-Fla., the incoming chairman of the House’s Middle East panel, also noted that the Trump administration “is yielding American leadership to powers like Russia, Iran and Turkey to decide the future of Syria.” Deutch pointed to comments to that effect from Trump’s Syria envoy, James Jeffrey, before his panel last month.

But less hawkish Democrats endorsed the withdrawal – if not Trump’s broader Syria policy.

“I support withdrawing troops, but we must rejoin a diplomatic process that the Trump administration has left to other powers, and we need a surge in humanitarian relief,” Sen. Chris Murphy, D-Conn., said in a statement.

Meanwhile, Rep. Ruben Gallego, D-Ariz., responded to Graham’s attacks on the withdrawal by tweeting “We finally found the one thing that Lindsey loves more than [Donald Trump] ….. more war.”

“If ISIS is destroyed and unable to operate as a quasi-state entity, then our mission is done and we should bring our troops home,” said Gallego, an Iraq war veteran. “The authorization for use of force that we operate under in Syria has no mention of Iran or Russia.”