The American Israel Public Affairs Committee hasn’t made much headway on key issues such as the Iran nuclear deal and anti-boycott legislation. 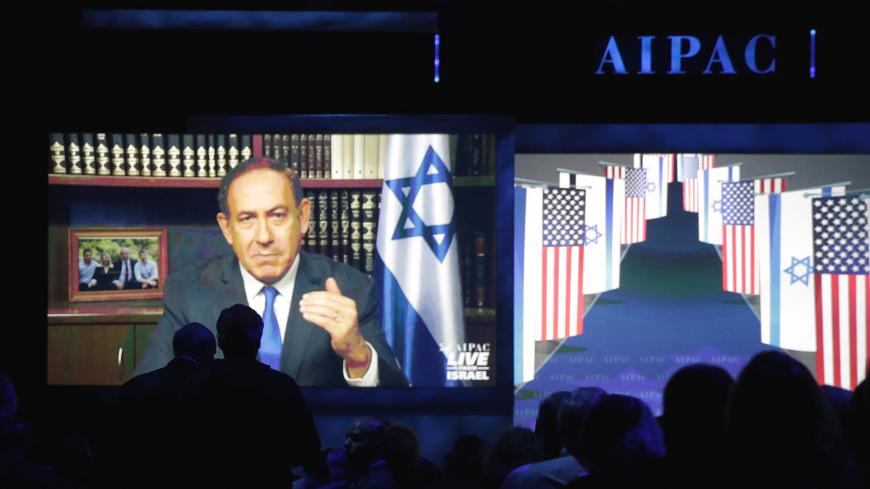 America’s main pro-Israel lobby is struggling to bring Democrats and Republicans together on major legislation ahead of its annual confab as bipartisan consensus on foreign policy continues to erode.

The American Israel Public Affairs Committee (AIPAC) holds its three-day policy conference starting Sunday. As in years past, the group’s lobbyists have worked with Congress to tee up legislation for the thousands of eager members coming into town to rally around. But the lobby has no concrete plans to fight the anti-Israel boycott or strengthen the Iran nuclear deal.

“It’s notable that two days before the conference they’ve had difficulty coming up with concrete asks,” a Senate staffer told Al-Monitor.

AIPAC continues to push the Senate to pass the Israel Anti-Boycott Act, which bans Americans from supporting a UN plan to create a list of companies operating in the West Bank. While the bill enjoys 51 cosponsors from both parties, opposition from the American Civil Liberties Union and other free speech advocates has halted its progress.

The bill’s Senate sponsor, Democrat Ben Cardin of Maryland, has agreed to alter the bill to assuage some of these concerns. It’s not clear, however, that he can address the free speech issues without rendering the bill toothless. AIPAC for its part has yet to spell out what it would accept in an alternative bill.

The organization is also struggling to deal with the partisan climate around the nuclear deal, which was negotiated under President Barack Obama and didn’t get a single Republican vote in the House or Senate. AIPAC staunchly opposed the deal from the outset, but is rallying behind the president’s calls to fix its perceived flaws rather than calling for its dismantlement.

An AIPAC backgrounder calls on Congress to “extend key restrictions on Iran’s nuclear program” that eventually expire under the deal. The lobby also wants the International Atomic Energy Agency to “strengthen, expand and provide full transparency into its inspection of Iran’s nuclear program.”

However, AIPAC has stopped short of endorsing a White House-backed partisan bill from Senate Foreign Relations Committee Chairman Bob Corker, R-Tenn., that would reimpose sanctions on Iran if it comes within a year of obtaining a nuclear weapon. Instead, the group wants Corker and the committee’s top Democrat, Sen. Bob Menendez, D-N.J., to pen a letter to the administration urging Trump to reach a follow-up agreement with European signatories to the deal.

While the United States and its European partners may be able to agree to further action against Iran’s ballistic missile program, another AIPAC demand, Trump’s insistence on addressing the deal’s sunset provisions with the threat of further sanctions will be a harder sell. Further complicating matters is the fact that Russia and China are also signatories to the deal.

AIPAC nonetheless had overwhelming success by joining forces with the Chamber of Commerce and the Israeli American Council, Al-Monitor has learned, to convince all 100 senators to sign onto another letter directed at Homeland Security Secretary Kirstjen Nielsen.

Spearheaded by Sen. Mazie Hirono, D-Hawaii, and Sen. James Inhofe, R-Okla., the letter requests that the Department of Homeland Security expedite Israel’s membership in the US Global Entry Program, which eases entry into the country for pre-approved travelers from select countries. Israel has participated in a limited, pilot Global Entry program since 2012 and seeks to become a full member.

“Israel’s membership in Global Entry would not only provide its passport holders a smoother visit to the United States but would also help to make our country safer by enhancing bilateral law enforcement cooperation,” the senators write in the letter.

However, Maya Berry, the executive director of the nonprofit Arab American Institute, raised concerns about Israeli profiling of Arab Americans and US pro-Palestinian activists at Israel's borders. She argued that allowing Israel to become part of the Global Entry Program would be inappropriate unless Israel stops discriminating against Arab Americans.

“Every single one of these senators has a constituent that’s been subjected to discrimination at Israel’s border in the form of harassment or detention or even deportation,” Berry told Al-Monitor. “We are going to demand that the Department of Homeland Security uphold the requirements of the Global Entry Program and if you respect that precedent that requires reciprocity, then there is no way that Israel could be admitted.”

In addition to the Global Entry letter, AIPAC has pushed for military assistance and more sanctions against Iran’s Islamic Revolutionary Guard Corps (IRGC).

While AIPAC calls on Congress to maintain the $3.8 billion per year in military aid negotiated by the Obama administration in a 2016 memorandum of understanding, the backgrounder also calls on lawmakers to “expand joint innovation, enhance Israel’s qualitative military edge … and consider upgrades to the value of US stockpiles in Israel.”

To that end, Rep. Ileana Ros-Lehtinen, R-Fla., and Rep. Ted Deutch, D-Fla., the respective chairwoman and ranking member of the House panel overseeing the Middle East, introduced a bill this week codifying the $38 billion, 10-year memorandum of understanding into law. The bill also reaffirms the US commitment to maintaining Israel’s qualitative military edge against other countries in the region while including provisions to bolster cooperation on cybersecurity, space and drone detection.

Meanwhile in the upper chamber, Sen. Lindsey Graham, R-S.C., and Sen. Chris Coons, D-Del., fresh off a trip to Israel, made clear to reporters that they think the $3.8 billion a year in Israeli military aid is insufficient and that they intend to appropriate additional funding. Graham chairs the Senate panel that oversees foreign aid spending.

Additionally, the AIPAC backgrounder calls on Congress to “toughen sanctions enforcement” against the IRGC and “penalize” its supporters.

Almost on cue, Rep. Ed Royce, R-Calif., and Eliot Engel, D-N.Y., respectively the chairman and top Democrat on the House Foreign Affairs Committee, introduced legislation this week to further sanction companies partially owned by the IRGC. The bill authorizes the Trump administration to sanction companies even if the IRGC owns a less than 50% stake. It also requires the administration to submit a report to Congress on companies “for which there is a reasonable basis to determine that Iran’s Revolutionary Guard Corps has an ownership interest” of at least 33%.