Pro-Israel Democrats are holding their fire on President Donald Trump’s Israeli-Palestinian peace proposal despite some reservations. 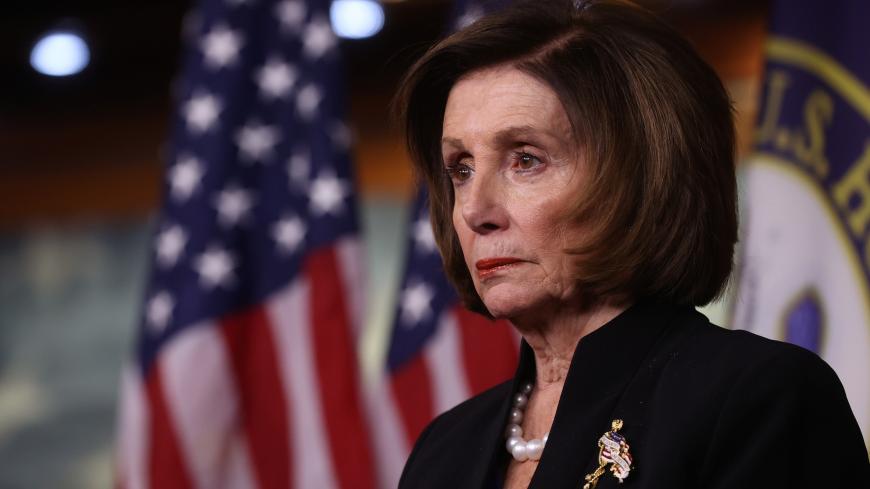 US Speaker of the House Nancy Pelosi discusses the Trump administration's Middle East peace plan proposal during a news conference at the Capitol in Washington, Jan. 28, 2020. - REUTERS/Jonathan Ernst

Pelosi said that “there appears to be a basis for negotiation” during a press conference to discuss the recent congressional delegation she led to Israel to commemorate the 75th anniversary of the liberation of the Auschwitz extermination camp.

A group of pro-Israel Democrats who accompanied Pelosi on the trip — including House Foreign Affairs Committee Chairman Eliot Engel of New York and Middle East panel Chairman Ted Deutch of Florida — also expressed hope that Trump’s proposal could lead to direct negotiations between the Israelis and Palestinians to ultimately result in a two-state solution.

“The devil is in the details,” said Engel. “I hope it follows through and that we can try to bring an end to this horrific Israeli-Palestinian crisis once and for all, but again, it’s the details that we have to see.”

After two years of unsuccessfully trying to get the White House to brief Congress on the plan, Pelosi, Engel, Deutch and other lawmakers met today with Jared Kushner — Trump’s special envoy for the peace process. They received a two-page outline of the plan hours before the White House released the proposal in its entirety.

Deutch noted that he would have to read the full 180-page plan to “carefully determine whether the details can realistically help lead to lasting peace,” but cautioned that “President Trump cannot proclaim the outcome to direct negotiations, nor can he create borders by fiat.”

He also voiced “concerns about the ability to achieve continuity for a sovereign Palestinian state if there are no changes on the ground, as the president stated will be the case.”

Senate Minority Leader Chuck Schumer, D-N.Y., also warned, “Unilateral action taken by either side in response to the release of the Trump administration’s plan will diminish the prospects of a future peace.”

Still, the Palestinians have boycotted talks with the Trump administration since he moved the US Embassy in Israel to Jerusalem in 2017. Trump, speaking beside Israeli Prime Minister Benjamin Netanyahu, vowed that Jerusalem would be the “undivided capital” of Israel, and the plan would relegate a future Palestinian capital outside the security barrier.

Trump touted his proposal as an opportunity to achieve “a realistic two-state solution,” but it also grants a huge territorial concession to Israel by allowing it to retain its West Bank settlements. However, he did note that the territory allocated for a Palestinian state under the plan “will remain open and undeveloped for a period of four years.”

“We were encouraged to see that the ambassadors from Oman, Bahrain and the United Arab Emirates attended the announcement, and we call on the Arab states to play a constructive role in urging the Palestinians to resume negotiations with Israelis,” AIPAC tweeted.

“They are discarding decades of bipartisan US policy in favor of a destructive effort that is certain to exacerbate the Israeli-Palestinian conflict, empower the most dangerous extremists on both sides and destabilize Israel’s already tenuous relationship with Jordan,” J Street said in a statement.

“Any acceptable peace deal must be consistent with international law and multiple UN resolutions,” Sanders tweeted. “It must end the Israeli occupation and enable Palestinian self-determination in an independent state of their own alongside a secure Israel. Trump’s so-called ‘peace deal’ doesn’t come close and will only perpetuate the conflict. It is unacceptable.”

Warren also blasted the plan as “a rubber stamp” for an Israeli annexation of the West Bank and asserted that it “offers no chance for a real Palestinian state.”

Sanders and Warren also joined their fellow presidential candidate Sen. Amy Klobuchar, D-Minn., and nine other Democratic senators in a letter to Trump led by Sen. Chris Van Hollen, D-Md., which argued that the the plan has made it “impossible’ for the United States to serve as a "credible player" in negotiations between Israel and Palestine. The letter also argued that the timing of the proposal "raises disturbing questions about your intention to intervene" in the Israeli selections slated for next month.

And Sen. Chris Murphy, D-Conn., said that it’s “no coincidence this plan supports recognizing illegal settlements and unilateral Israeli annexation, while discarding any notion of a two-state solution.”

“I hope the Palestinians see this as a serious offer and come to the table,” Graham said.

And Rep. Michael McCaul, R-Texas, the top Republican on the House Foreign Affairs Committee, praised the plan as the best path forward to achieving a two-state solution.

by Murielle KASPRZAK and Joseph SCHMID | AFP | May 26, 2022
END_OF_DOCUMENT_TOKEN_TO_BE_REPLACED