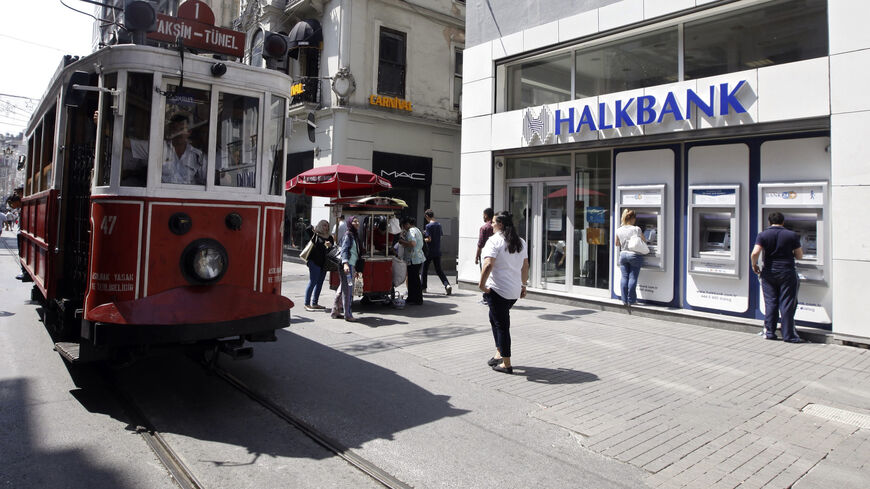 Customers use automated teller machines at a branch of Halkbank as a tram drives by in Istanbul Aug. 15, 2014. - REUTERS/Osman Orsal

The main lobbying firm for Halkbank told Al-Monitor today that it was no longer representing the Turkish state-owned bank after federal prosecutors indicted it on Tuesday.

“For some months now, we have been arguing that in its consideration of this case, it was important for the US government to taken into account the fact that Turkey is a close NATO ally and the bank is especially important to the country’s financial system and economy,” said James Rubin, a partner at Ballard Partners who represented Halkbank along with former Donald Trump Florida lobbyist Brian Ballard. “Since the matter is now in the judicial channels, we felt it was the right moment to bring our representation to a close.”

The bank hired Ballard Partners in August 2017. The bank has paid Ballard more than $2.6 million since then.

Ballard reported contacts with White House and State Department officials on the issue. Congressional lobbying records also show that the bank hired McGinn and Company in December 2017 and has paid the firm $690,000 since then.

Another firm, King & Spalding, briefly registered as a lobbyist for the Turkish Foreign Ministry in December 2017 after one of its partners, former federal prosecutor Andrew Hruska, asked the US Attorney’s Office for the Southern District of New York for a continuance in its case against one of the bank’s top executives, Deputy General Manager Mehmet Hakan Atilla. Hruska’s letter prompted the Department of Justice’s foreign lobbying unit to request that King & Spalding register. The firm never disclosed any political activities or payments from Turkey, however.

Atilla was sentenced to 32 months in prison in May 2018, prompting speculation about when — or whether — the bank itself would be charged. After serving his sentence, he returned to Turkey in July.

Read our complete coverage of lobbying by Turkey and Turkish interests here.

Update: Oct. 16, 2019. This story has been updated with comment from Ballard Partners.