Iran has replaced the Islamic State as Donald Trump’s boogeyman during his first trip abroad, to the delight of the Saudis and Israel. 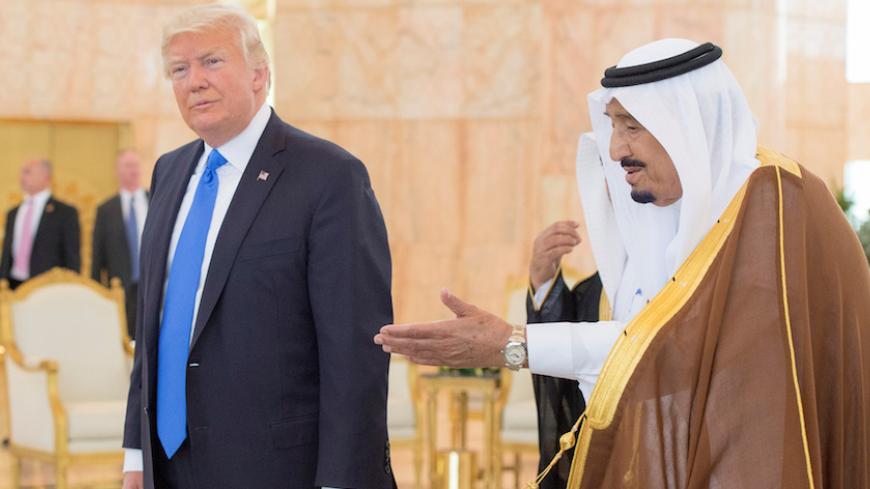 WASHINGTON — US President Donald Trump, arriving in Israel on May 22 right after a stop in Saudi Arabia, found another ally eager to praise him for his tough stance on Iran — and encourage him to get even tougher.

“I want you to know how much we appreciate the change in American policy on Iran, which you enunciated so clearly,” Israeli Prime Minister Benjamin Netanyahu said in joint remarks with Trump at their third meeting of the day.

At an earlier meeting with the Israeli leader at Jerusalem’s King David Hotel, Trump had lambasted the nuclear deal negotiated under his predecessor Barack Obama in remarks that Netanyahu could almost have drafted himself. He called the 2015 agreement a “terrible, terrible thing” and promised that Iran will never obtain a nuclear weapon, “that I can tell you.”

“Iran negotiated a fantastic deal with the previous administration. ... It is unbelievable from my standpoint,” Trump said, according to the White House press pool.

Without the nuclear deal, he said, “I think [Iran] would have totally failed within six months.”

“We gave them a lifeline ... we gave them wealth and prosperity. And we also gave them an ability to continue with terror. ... No matter where we go, we see the signs of Iran in the Middle East,” he went on. “Instead of saying ‘thank you’ to the United States, they now feel emboldened.”

The remarks echoed Trump’s remarks on May 21 to another receptive audience — the summit of mostly Sunni Arab and Muslim leaders in Riyadh, Saudi Arabia.

“From Lebanon to Iraq to Yemen, Iran funds, arms and trains terrorists, militias and other extremist groups that spread destruction and chaos across the region,” Trump said. He singled out Iran’s support for President Bashar al-Assad’s regime in Syria as particularly “tragic and destabilizing.”

“Until the Iranian regime is willing to be a partner for peace, all nations of conscience must work together to isolate Iran, deny it funding for terrorism and pray for the day when the Iranian people have the just and righteous government they deserve,” Trump vowed.

Ironically, Trump’s call to isolate Iran came just days after his administration waived nuclear-related sanctions and a day after centrist President Hassan Rouhani won re-election by a wide margin. Last month, Secretary of State Rex Tillerson certified that Iran was complying with the deal, leaving the administration no option but to waive sanctions or violate its end of the bargain.

With Rouhani’s victory over conservative cleric Ebrahim Raisi, Iran sent the world a message that it was choosing international engagement and economic reform over hard-line confrontation with the West. The United States responded by boosting Iran’s fiercest regional rivals, notably with a $110 billion weapons package for Saudi Arabia and calls for Iran’s international isolation.

“Iran — fresh from real elections — attacked by @POTUS in that bastion of democracy & moderation,” Zarif tweeted May 21. “Foreign Policy or simply milking KSA […]?”

Some observers questioned whether the United States is leaning too far in the direction of Sunni allies and Israel in its efforts to reassure them after the Obama years. They worry about the risk of alienating Iran as it seeks further international engagement, perhaps even to the point of "sectarianizing" the US approach to the region in favor of Sunnis over Shiites.

“The Trump administration is doubling down on Saudi Arabia and the thesis that you can create a global, counter-violent Islamist extremist movement that doesn’t include Iran,” Nicholas Heras, a Middle East expert at the Center for a New American Security (CNAS), told Al-Monitor. “Which is one of the major talking points … the Saudis [have] tried to push forward over the last couple of years, partly in response to the Obama administration” pursuing the Iran nuclear deal.

“By singling out Iran and Iran’s destabilizing actions in the region, the Trump administration really sort of skipped over” Iran’s motivations, Heras said.

Suzanne Maloney, a State Department policy planning official under President George W. Bush, said there was always going to be “a correction” after Obama toward traditional US allies and away from Iran, even if Hillary Clinton had won. But the pendulum may be swinging too far now, she said, and it may need some adjustment.

“The Obama administration had tied itself in knots in its desire to avoid anything that might disrupt the [Iran nuclear] negotiations and then implementation of the deal,” said Maloney, who is now with the Brookings Institution.

“But what you are pointing to is that the pendulum may be swinging too far,” Maloney said. “There will be forces — including Iran’s own counter actions — that will, I think, bring the pendulum closer to some sort of equilibrium.”

Ilan Goldenberg, a former Pentagon and State Department Middle East official during the Obama administration, agreed that some reassurance to America’s Sunni allies and Israel after the anxiety over the Iran nuclear deal was warranted. But the Trump administration’s tilt to the Sunnis may be excessive and may not be part of a larger strategy, he said.

“I think there is a benefit to reassuring our Sunni partners and to pushing back on Iran for some of its behavior, especially given how anxious they were after the nuclear deal, and how much they … were irrationally angry at Obama,” Goldenberg, with CNAS, told Al-Monitor by phone from Israel.

“But there is a balance to be struck here,” Goldenberg said. “The right approach involves both pressure and engagement. And you also want to leave open channels to have a dialogue. And you don’t want to go so far as to become part of the conflict. And in some areas, [Trump administration officials] are trending dangerously close to that.”

Tillerson has indicated that he’s at least aware of the risks. Speaking to journalists in Riyadh over the weekend, he said he did not rule out talks with his Iranian counterpart — at some point.

“I’ve never shut off the phone to anyone that wants to talk or have a productive conversation,” Tillerson said at a news conference with Saudi Foreign Minister Adel al-Jubeir in Riyadh. “At this point, I have no plans to call my counterpart in Iran, although, in all likelihood, we will talk at the right time.”

For his part, Iran’s newly re-elected Rouhani, speaking at a press conference in Tehran on May 22, suggested he was open to further negotiations with the United States. He said Iran would want to wait for the Trump administration to be “well established” before it will “pass judgment” on the relationship.

“Iran and America have gone through lots of ups and downs in the past 39 or 40 years,” Rouhani said at a news conference, according to The New York Times. “They have used numerous measures against Iran, all leading to failure. Americans were only successful in their engagement with the Iranian nation during the nuclear talks.”