In retaliation for a mysterious explosion along the Turkish-Syrian border, Turkey hit several Kurdish positions in the predominantly Kurdish town of Kobani in an attack that the Kurds call a “war rehearsal” aiming to test the water. 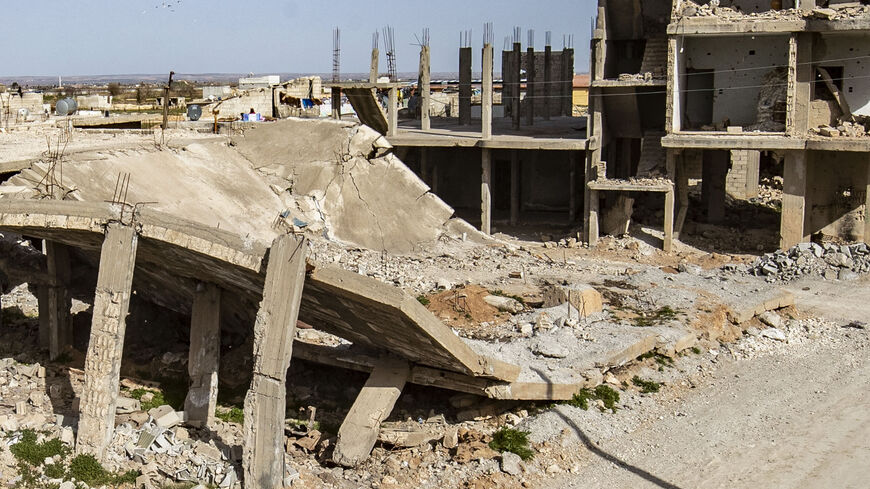 People sit on the ground by a destroyed building in the Kurdish town of Kobani, in the north of Aleppo governorate, Syria, Feb. 25, 2021. - Delil Souleiman/AFP via Getty Images

Turkey appears to be aiming to maintain high tensions in northeast Syria through a series of Turkish drone strikes targeting senior Kurdish figures.

The relative calm in northern Syria that had taken hold after Turkey shelved its plan for a fresh military incursion against Syrian Kurdish groups in the absence of greenlights from Russia and the United States were shaken Jan. 8 after an improvised explosive device went off near Tell Abyad along the Turkish border, ​​killing three Turkish soldiers.

In response to the attack, the Turkish army and Turkish-backed Syrian rebels hit several Kurdish positions near Kobani, Tell Abyad and Ras al-Ain. According to the Turkish Defense Ministry, more than 10 Syrian militants were killed in the retaliation attacks.

Although the Kurdish-led self-rule in northeast Syria has denied the accusations, saying that the attack had nothing to do with them, the Turkish attacks have expanded to Hasakah and Tell Tamir. Local sources reported that at least 28 villages were taken under fire.

It would be misleading to interpret these attacks as merely a retaliation. According to Kurdish journalist Nazim Dastan, who is currently in the region, in addition to drone strikes the Turkish army has for the first time used howitzers to hit Kobani city and other nearby towns during the latest attacks that killed one and wounded 17.

“These attacks were extraordinary in every way,” Dastan told Al-Monitor. “I believe Turkey tried something different here. The attacks were, as if, aiming to gauge the pulse in Kobani or potential reactions from the United States and Russia.”

Dastan pointed out that although the explosion that killed the Turkish troops had taken place near Tell Abyad, the retaliation attacks targeted Kobani and nearby villages.

“The explosion took place right along the border. These areas are under the control of Turkey and are being nonstop monitored by surveillance and predator drones. So it’s not an easy thing to approach the area and plant a bomb on the road where patrol are conducted,” Dastan said, adding that all of the casualties of the Turkish strikes were civilians.

Arguing that Kobani has been among primary targets of Turkey since several villages near the town had fallen under the control of the Islamic State in 2014, Dastan said, “Turkey has never ceded its plans to seize Kobani. They are looking for an opportunity for this.”

Turkey is keeping the region under fire in a bid to maintain the status quo in the Operation Peace Spring region and to crush the Kurdish-led self-rule in northern Syria. Yet Ankara’s escalation strategy has also other aims.

Although the cease-fire deal between Ankara and Moscow in 2019 ensured the Kurdish forces pulling back to a depth of up to 30 kilometers (20 miles) from the Turkish border, it hasn’t fully satisfied Turkey. Furthermore, the Turkish military presence in the region and Ankara’s threats for fresh incursions are aiming to foil attempts to obtain a constitutional status for the Kurdish-led autonomous region through a dialogue with Damascus.

This strategy, in a way, is aiming to mature the conditions to bring Russia and Syria closer to Ankara's fold on the Syrian Kurdish issue.

“Turkey's attacks are serving Damascus as well because the Syrian government is seeking to reinstate its control to the east of the Euphrates without negotiating with the autonomous administration,” the source told Al-Monitor under strict condition of anonymity.

The Syrian Kurds widely believe that the talks between the Turkish intelligence officials and their counterparts from the Syrian government are mainly focusing on the crash of the Kurdish-led self-rule in northern Syria. Therefore, the Turkish military pressure on the Syrian Kurdish groups is considered useful and tacitly supported by Moscow.

Whenever Turkey delivers a threat for a fresh military incursion against the Syrian Kurdish regions, Russian-mediated talks between the Kurdish groups and Damascus become an agenda item. For example, when Turkish President Recep Tayyip Erdogan threatened for a new offensive in northern Syria in October, Syrian Kurdish officials said that the address of a potential solution in the region was Damascus and that Russia needed to use its influence over the Syrian government to facilitate a dialogue.

Yet the quest of dialogue has now been replaced by mutual recriminations and despair amid increasing tensions between Damascus and the Syrian Kurdish groups. According to the Kurdish sources, Damascus has been refraining from any kind of talks with the Kurds and counting on time for the conditions to become ripe for the Kurds to surrender their regions, giving up their hope from the United States.

The second reason for Ankara’s escalation strategy has to do with the in-house rifts among the Turkish-backed opposition groups. Whenever the clashes between the Syrian Kurdish groups and the Turkish troops subside, in-house rivalry among the Turkish-backed armed opposition groups escalate. Following Ankara’s shelving of military incursion plans, cooperation between the two major Turkish-backed factions have severed. Al Mutasim Brigade announced 17 Dec. that it would no longer work with the Ahrar al-Sharqiyah in the Euphrates Shield, Peace Spring and Olive Branch areas.

Such internal rifts are complicating Ankara’s plans on the ground. In addition to the internal rivalry, the Turkish-backed groups’ disgruntlement with Ankara is reportedly growing as the purchasing power of Syrian fighters' salaries is dwindling due to the meltdown in the Turkish lira.

According to the Kurdish sources, the Turkish intelligence officials met with commanders of the major Syrian opposition factions in Ankara Dec. 30 in a bid to address the problems. The Syrian commanders reportedly conveyed a series of demands to the Turkish side including increasing ammunition and logistical support, to receive their salaries in US dollars instead of Turkish lira, deployment of the Turkish troops between Syrian opposition factions to prevent the in-house clashes and strengthened protection through surveillance and armed drones.

Meanwhile, Ankara has been arguing that the joint Turkish-Russian patrols along the line separating Kurdish-held and opposition regions have failed to thwart attacks by the Kurdish groups. Similarly, Kurdish groups have been also criticizing Moscow for failing to prevent the Turkish attacks on their areas.

Ankara also argues that the Syrian Revolutionary Youth, a group affiliated with the outlawed Kurdistan Workers Party (PKK) are deployed in the regions where the People Protection Units (YPG) withdrew under the 2019 deal between Ankara and Moscow. Ankara considers both the PKK and YPG terrorist organizations.

Yet, according to Dastan, Ankara is using this argument in a bid to legitimize its attacks on the Kurdish-held regions. “The Syrian Revolutionary Youth has been around since the [war] began. Today they are organized in every city in the region,” Dastan said. “It's not an armed outfit. There is no need for these sorts of groups in the presence of the Asayish Force and the Syrian Democratic Forces [SDF]. I believe [Turkey] is using this group to justify its attacks.”

Turkey’s strikes have killed at least 11 people in Kurdish-held northern Syria since August. In a Dec. 25 strike in Kobani five Syrian Revolutionary Youth activists were killed. Condemning the attack, Mazlum Kobane, commander in chief of the US-backed SDF, described the attack as a “continuation of Turkey’s occupation policies that target the security and safety in north and east Syria."