Turkey’s economic turmoil might challenge Ankara's grip over opposition-held areas in Syria, where in-house rivalries among the armed factions over financial resources have escalated. 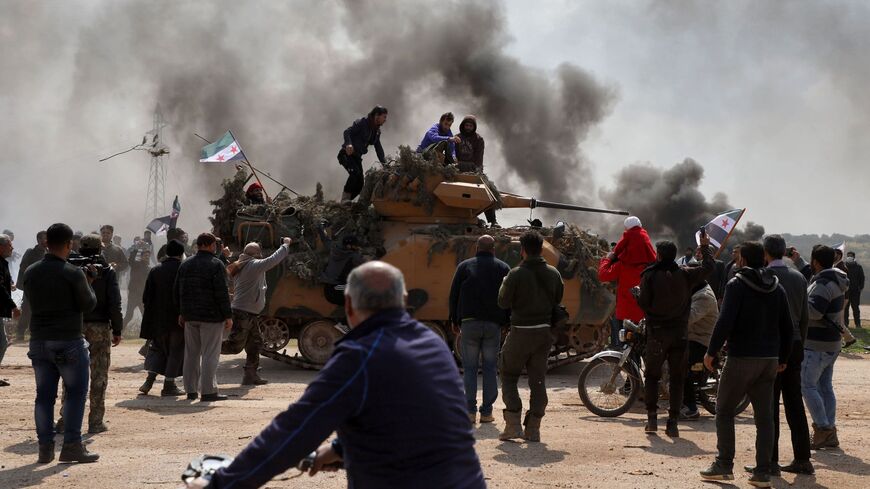 Syrians in protest climb atop a Turkish military infantry-fighting vehicle as they attempt to block traffic on the M4 highway, which links the northern Syrian provinces of Aleppo and Latakia, about 14 kilometers southeast of the city of Idlib on March 15, 2020. - AAREF WATAD/AFP via Getty Images

With economic turbulence rattling Turkey’s economy, the question is rising of whether Ankara can maintain its grip on Syria’s opposition-held areas where the Turkish lira is the de facto currency.

The meltdown in the lira has heated up the in-house rivalries over financial resources between armed opposition factions and fueled public discontent in opposition-held areas. The turmoil threatens to erode Turkish-backed militia’s control in al-Bab, Jarablus, Azaz, Afrin, Tel Abyad and Ras al-Ain.

Similarly, the deteriorating economic situation may undermine the authority of Hayat Tahrir al-Sham (HTS), the dominant jihadi group in Idlib, where Turkey’s heavy military deployments along the strategic M4 highway serve as a shield against the Syrian government forces.

The HTS seems to regret its decision to use Turkish lira in the region under its control as prices of oil and some staple food items including bread have skyrocketed. Price of a loaf doubled to 5 liras despite HTS leader Abu Mohammad al-Jolani’s pledge to subsidize the bread. Watad petroleum, an oil company linked to the HTS, meanwhile, indexed its prices to the US dollar, converting from the lira.

In Turkish-backed opposition areas, the internal rifts among the factions under the banner of Syrian National Army (SNA) are growing amid financial turbulence. The internal rivalry over revenues is nothing new, but they may have reached a point challenging Ankara's grip over these groups.

The ongoing rifts between Turkey-backed Ahrar al-Sharqiyah and Al Mutasim Brigade have led to the end of the cooperation between the two groups. Al Mutasim announced on 17 Dec. that it would no longer work with the former in the Euphrates Shield, Peace Spring and Olive Branch areas.

The Biden administration levied sanctions against Ahrar al-Sharqiyah in July, accusing the group of grave human rights abuses against civilians. The group, one of the notable components of the SNA with some 2,500 fighters, is reportedly comprised of Deir ez-Zor-based opposition factions. Ahrar al-Sharqiyah’s unrestrained actions and attempts to marginalize other groups in a bid to monopolize the power particularly in Ras al-Ain and Tel Abyad threatens the other armed groups backed by the Turkish army.

Amid the turmoil, some even claimed that Ankara lost its control over the armed groups due to financial hardships exacerbated by the war against the Kurdish-led Syrian Democratic Forces. This, in turn, allegedly widened the cracks between the Turkish-backed factions. Fighters of these groups receive monthly payments in Turkish lira worth $70 to $100 depending on the region. Their purchasing power has shrunk drastically by the plunge of the lira.

The armed groups were eying for a fresh Turkish incursion against the Kurdish Syrian groups. But Ankara’s shelving of the plan in the absence of the Russian and American greenlights has dashed the prospects of new revenue streams and war spoils.

Afrin, which was captured in 2018, has become a major source of income for the Turkish-backed groups. In addition to the houses evacuated by the Kurds escaping the Turkish advances, olive groves, olive oil and soap plants along with historical artifacts have been the target of organized looting campaigns for four years. Most recently, Ras al-Ain and Tel Abyad which were captured in October 2019 have witnessed similar campaigns.

The rivalry for revenues and crime along with it have re-escalated in Afrin despite assurances by the Turkish authorities that there was no tolerance for plundering and looting. Mohammed Jassem, leader of Sultan Suleiman Shah Brigade with which Ankara has closely cooperated in the transfer of militias to Libya and Nagorno Karabakh, has long been accused of extortion, murder, kidnapping, torture, looting, theft, drug and arms smuggling.

Some SNA-affiliated rivals of the Suleiman Shah recently threatened Jassem, who is also known as Abu Amsha, to force him to hand over his brothers to the authorities for a probe on various crimes. The tension between the two camps dangerously escalated after Abu Amsha turned down the demand and with both sides deploying to the northwestern town of Shaykh al-Hadid near Afrin. Amsha was forced to hand over one of his relatives to the authorities to avoid large-scale armed clashes.

A series of videos, allegedly filmed by relatives of Abu Amsha and implicating the commander in drugs and arms smuggling, have exposed the extent of the internal rifts within the Suleiman Shah.

In reaction to the claims, a commander of the Azm Operations Room, a joint operation center formed by various opposition factions, said Dec. 20 that the opposition forces have “great responsibility to save our revolution from the evil of criminals and plunderers,” referring to Abu Amsha. Following this announcement, the forces affiliated with the operation center raided a drug den reportedly run by an ally of Abu Amsha. Reaction of Turkish intelligence, which allegedly collaborated with Abu Amsha to transfer Syrian militias to foreign war zones, to this rivalry remains unknown. The Azm joint operation center was formed by Turkish-led efforts in July, but soon plagued by internal disagreements.

One of the leading factions of the center, the Sultan Murad Brigade, is known to have close ties with Ankara. Abu Amsha-led Sulaiman Shah had also joined the center, but later withdrew, announcing it was joining a “Syrian Liberation Front.” Turkish intelligence reportedly played a role in that alliance as well.

Although Ahrar al-Sharqiyah stands out as the most notorious one, the criminal records of other groups are hardly different. Armed groups including Sultan Murad, Al-Hamza Division, Faylaq al-Sham, and Jabhat al-Shamiyah have also been accused of ravaging olive groves, looting plants and plundering historic sites. These actions, in turn, are further fueling public discontent.

Shrinking financial resources amid the turmoil would likely escalate the rivalry, along with the disgruntlement of locals who live in opposition-controlled areas, further complicating Ankara’s command and control efforts on the armed groups. The escalating in-house clashes, particularly in Afrin, might lead to a similar scenario that transpired in Idlib, where radical HTS crushed all other groups, announcing its self-proclaimed government.