Economic gains have been at the core of clashes between rebel groups in Syria’s Idlib and Turkish-controlled regions that Syrian rebels describe as “liberated” areas. 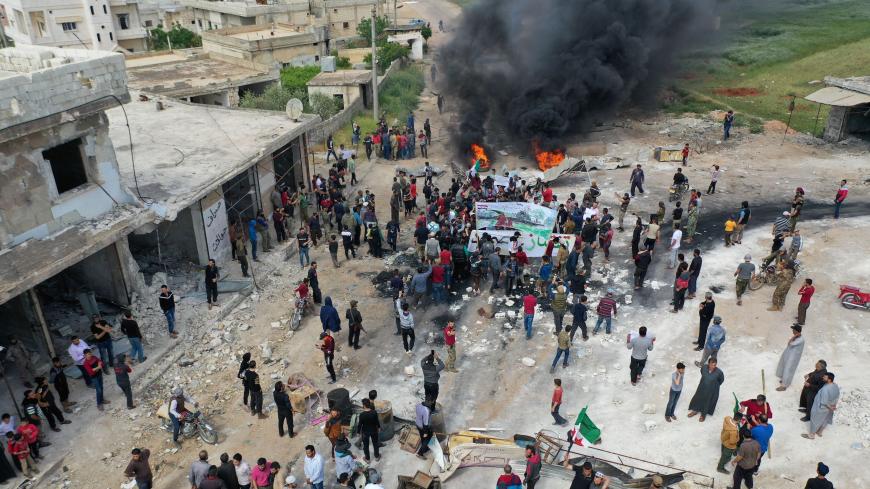 A drone image shows Syrian demonstrators gathering during a protest in the village of Maarat al-Nassan in Syria's Idlib province on May 1, 2020, to protest against a reported attack by Hayat Tahrir al-Sham on a demonstration the previous day. - OMAR HAJ KADOUR/AFP via Getty Images

A giant revenue stream lies at the heart of the clashes between rebel groups in Syria’s Idlib and Turkish-controlled regions that the Syrian rebels deem as “liberated” areas.

The attempts of Hayat Tahrir al-Sham, the hard-line Islamist group controlling the last rebel stronghold, to revive commercial ties with Syrian government-held areas highlights the importance of revenue generating streams for the region.

Hayat Tahrir al-Sham, which is considered a terrorist organization by the United States and much of the international community, is dragging its feet on forgoing control of the strategic M4 highway in Idlib as called for in the March 5 cease-fire deal between Turkey and Russia.

The first Hayat Tahrir al-Sham attempt came April 18, when the group tried but failed to set up a commercial crossing in the key city of Saraqeb on the Aleppo-Damascus highway. The second attempt to open such a crossing in Maarat al-Nassan was blocked by rebel rivals opposed to reviving trade with the areas controlled by the Syrian regime. Armed factions staged nine separate demonstrations to protest the move; Hayat Tahrir al-Sham forces dispersed the protests by force, killing one fighter.

The deadly escalation shows the importance of so-called “customs” fees collected at crossings for the armed factions in Idlib. Simultaneously, in-house rifts sparked among the Turkish-backed rebels in Afrin, Tell Abyad, al-Bab and Jarablus.

Aside from foreign aid, the revenue wheel spins on three main pillars: “taxes” taken from shopkeepers, “customs fees” taken from vehicles crossing at checkpoints between regions and criminal activities such as looting, other taking of property and ransom.

After seizing the Bab al-Hawa border crossing, and crossings linking Idlib with Aleppo and Hama in 2017, Hayat Tahrir al-Sham began taking the lion’s share of the “customs fees.” However, Idlib’s connection with Aleppo and Hama was cut off by the Russian-backed Syrian government’s military push aiming to take control of the M4 and M5 highways, and this has stripped Hayat Tahrir al-Sham of the revenues it was taking at several locations, including Qalat al Madiq, Abu Zuhur, Morek and al-Ais.

The radical group is now pursuing alternative funds to compensate for its losses. Said al-Ahmed, a Hayat Tahrir al-Sham official responsible for crossings, said 95% of the goods that currently enter Idlib are from Turkey and only 5% from government-controlled areas. Turkey, in turn, buys only 10% of Idlib's production, leading to a product surplus, particularly in agriculture. Regime-held areas stand as the only potential buyer for this surplus.

Saleh al-Hamawi, the former commander of Jabhat al-Nusra — the predecessor of Hayat Tahrir al-Sham — says the armed group was making more than $2 million monthly from six crossings in Idlib, with Morek being the most profitable at some $800,000. According to the Asharq Al Awsat, commercial vehicles had to pay between $300 to $500 at the Morek crossing depending on the size of their cargo.

After losing five of the crossings to Syrian government forces, Hayat Tahrir al-Sham was left with the Mansura crossing. Still, the SyriaCall website claims the militant group gets some $2 million in monthly revenue from Mansura, which was formerly controlled by the Nureddin Zengi Brigade.

The most profitable crossing is Bab al-Hawa on the Turkish border, where Turkey directly engages with Hayat Tahrir al-Sham despite considering it a terrorist organization. The armed group earns $4 million from the crossing monthly, according to SyriaCall.

After seizing control of Bab al-Hawa in 2017 from Ahrar al-Sham, Hayat Tahrir al-Sham launched a customs office within its civilian body, the so-called Salvation Government, for the management of border and internal crossings.

At the Bab al-Hawa crossing the group takes between $3 to $60 per ton for each cargo, with food products generally being charged some $5 per ton. The tariff rises further for technology products based on their weight or number of items. Some 115,000 trucks passed through the crossing in 2019.

Hayat Tahrir al-Sham “also seizes 10% of the humanitarian aid,” Hesen told Al-Monitor. The group makes some $2 million just from the Gazaviye crossing monthly, according to SyriaCall.

The two crossings bear logistical importance as Gazaviye links Afrin to Aleppo to the north and Azaz near the Turkish border to the south and the Atme refugee camp to the southeast.

A big income source has been energy; Hayat Tahrir al-Sham has monopolized oil products through a company called WATAD. Syria TV said WATAD’s monthly income is more than $1 million, with $250,000 from diesel, $400,000 from gasoline and $400,000 from electricity.

A Hayat Tahrir al-Sham official announced in September that the group’s monthly income had reached $130 million.

In Turkish-backed opposition-held territories, meanwhile, the profit wheel mostly relies on irregular incomes. Bab al-Salam, a Syrian opposition-held border crossing near Azaz, brings in roughly $3 million monthly. The interim government of the Syrian opposition receives 15% of the tax revenues that are being deposited in a Turkish bank account.

“Turkish-backed groups make millions of dollars from the transports to and from the regime-controlled areas,” Hesen said. “Taxes they impose on shopkeepers are also an important source of revenue as well.”

War spoils often lead to clashes among Turkish-backed allied factions. “Turkish-backed groups do not receive adequate salaries. They haven’t been paid in months,” Hesen said. “This is the main driving motive for resorting to stealing, plundering and kidnappings. Furthermore, the groups that refuse to send fighters to Libya have been threatened to have their salaries cut.”

Aside from feeding the warlords, these profit-generating schemes are also undermining the new Turkish plan for a “joint army” on the rebel side. Turkey, in turn, has largely refrained from interfering in the rebels’ revenue-generating means as its main concern is to retain its control in Syria.