Amid growing fears of a fresh Turkish offensive, the Syrian Kurds are under Russian pressure to cede full or partial control of the strategic town of Ain Issa to the Syrian government. 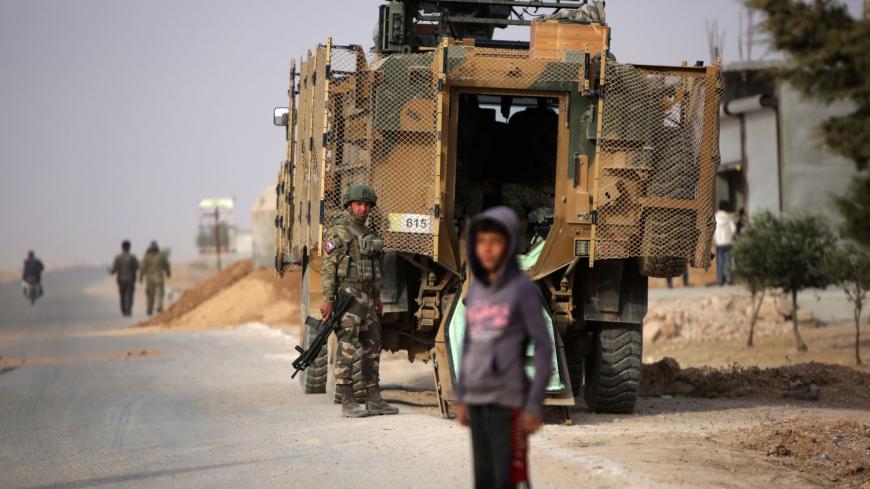 A Turkish soldier stands near his armored vehicle on a highway near the northern Syrian town of Ain Issa in the Raqqa region on Nov. 26, 2019, as Turkey-backed forces deploy reinforcements around the key town. - BAKR ALKASEM/AFP via Getty Images

The Kurdish-controlled town of Ain Issa has become the focal point of fresh tensions in northeast Syria as Turkey appears to be exploring a new military operation to undo Kurdish gains before US President-elect Joe Biden assumes office.

The Russian response to the Turkish threat evokes the scenario that led to Turkey’s seizure of the mainly Kurdish region of Afrin in 2018. In a bid to preclude a Turkish move, the Russians had pressed the Kurdish People’s Protection Units (YPG) to cede control of the area to the Syrian government. The YPG refused, leading Russia to tacitly greenlight the Turkish incursion. According to local sources, the Russians are now pressing the Kurds to hand Ain Issa over to the Syrian government, warning them that the Turkish military and allied militias are determined to seize the town. A formula similar to the arrangement in Qamishli is reportedly on the table as well. When the Kurds took control of the Kurdish-majority city in 2012, they agreed to leave the control of the airport and an area housing public buildings to Damascus.

Ain Issa — situated to the east of the Euphrates River at the junction of routes connecting Qamishli to the east, Raqqa to the south, Kobani to the northwest and Manbij to the west — has seen growing attacks by the Turkish military and the allied Syrian National Army (SNA) since November. Last week, the relentless shelling forced the Kurdish-led Syrian Democratic Forces (SDF) into a trilateral deal with Russia and the Syrian army to set up three joint observation posts in the area, with the stated aim of monitoring a cease-fire agreed as part of the 2019 Sochi deal between Russia and Turkey. Under the deal, the Kurdish forces pulled back 32 kilometers (20 miles) from the Turkish border. Ain Issa has remained under Turkish pressure even though it lies beyond that boundary at 37 kilometers (23 miles) from the border.

Syrian Kurdish sources told Al-Monitor that SDF representatives and Russian military officials had discussed the danger of a Turkish invasion in meetings at the Russian base in Ain Issa. The Russians warned that the threat had seriously heightened and asked the SDF to withdraw from the town and cede military and civil control to Damascus. The SDF refused, saying they would fight to defend the strategic town, according to the sources. The Russians then proposed the Qamishli formula. “They seem to have agreed on the Qamishli model, but that is not being officially confirmed,” one source said.

The confirmed part of the deal involves the establishment of three military observation posts along the M4 highway to the north, east and west of Ain Issa. Amid the talks, Russian reinforcements arrived in the area from Raqqa.

According to Kurdish journalist Nazim Dastan, who is currently in the region, no deal has been reached on the Qamishli model. “So far, the agreement is only about three observation posts. Two outposts have already been established along M4, with the Syrian military setting in,” he told Al-Monitor.

The Kurds had long complained of Russian indifference to Turkey’s cease-fire violations. As a guarantor of the Sochi deal, Russia has been conducting joint patrols with Turkey in the area. Ain Issa is home to a Russian coordination center, set up in the base that US forces evacuated last year. Locals in Ain Issa demonstrated in November against Russia’s inaction in the face of attacks by Turkey and its allies. According to the Syrian Observatory for Human Rights, the escalation has forced some 4,500 people, or 40% of the population, to flee Ain Issa and displaced 2,500 from surrounding villages.

The SDG and the autonomous administration believe the change of guard in Washington will make things harder for Turkey, but reckon that Ain Issa will remain in serious danger during the transition period, another Kurdish source told Al-Monitor. “Turkey wants to seize Ain Issa, but the problem is not limited to this town. After capturing Ain Issa, it might turn to Raqqa and then seek a position to influence the oil fields in Deir ez-Zor. By capturing Ain Issa, Turkey will also cut the connection between Kobani and Jazira,” the source said. It would also turn up pressure on the besieged city of Manbij to the west of the Euphrates.

As for Russia’s calculus, the source said, “The Russians are trying to use the Turkish threat to secure gains for the regime, just as they did in Afrin. … It is hard to predict how flexible they could be. Still, they are not in a position to [tell the Kurds], ‘You reject our proposals, we are out. Do whatever the hell you want to do.’ The Syrian government is averse to giving further space to Turkey. And a Turkish offensive on Ain Issa would mean Turkey’s trampling of a deal to which Russia is a guarantor.”

The trilateral partnership in Ain Issa might fail to fully block Turkish intervention attempts to the east of the Euphrates without additional curbs akin to the ones that put the brakes on Turkey’s Operation Peace Spring in October 2019.

The first brake was the Turkish-US deal of Oct. 17, 2019, followed by the Turkish-Russian accord in Sochi several days later. The Sochi deal restricted Turkish and SNA control to a border strip between Tell Abyad and Ras al-Ain extending 32 kilometers south to the M4 highway. The YPG agreed to retreat beyond that boundary, with Russian military police and Syrian border guards deploying in their stead. The deal also stipulated Turkish-Russian patrols along the eastern and western boundaries of the Turkish-controlled zone and the YPG’s removal from Manbij and Tell Rifaat, both to the west of the Euphrates.

Irked by the YPG’s continued presence in Manbij and Tell Rifaat, Ankara has been pressing for the handover of the two cities as well.

According to local reports, Turkish officials and SNA commanders met in the border town of Azaz Dec. 8 to discuss preparations for assaults on Manbij, Ain Issa and Tell Tamer, a town to the south of Ras al-Ain. Following the meeting, a large Turkish military convoy — formed by vehicles coming from the Turkish-controlled towns of al-Bab, al-Rai and Jarablus — headed to the Manbij area.

Should the trilateral collaboration in Ain Issa hold and advance, it could eventually thwart Turkey’s plans to expand its control along the M4 to maintain an “anti-Kurdish corridor” along the border. Turkey’s ambitions, however, are serving Russian plans to pave the way for the Syrian army’s gradual return east of the Euphrates.

Turkey may be unable to advance its own plans, but its pressure on the Kurds has led the SDF to acquiesce to sharing control with Damascus in yet another area. Ultimately, Ankara might consider Kurdish handovers of territorial control to Damascus a success. Yet, the objectives of its military presence also involve preventing the SDF’s integration into the Syrian army and constitutional status for the Kurds in a future Syria.