The Kurdish-held town of Tell Rifaat stands out as the focal point of a potential new crisis in northern Syria as Turkey threatens another military offensive amid discords with Russia and the United States. 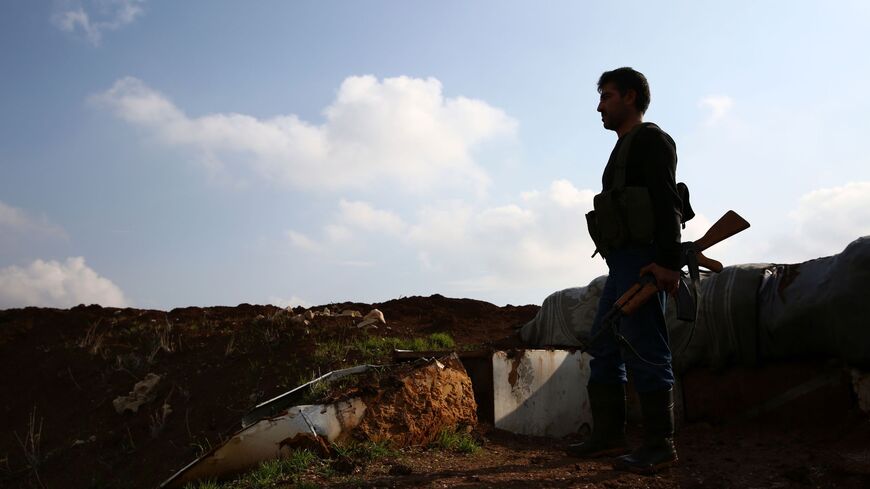 A Turkish-backed Syrian fighter holds a position in the village of Tal Malid, about 12 kilometres east of Tell Rifaat, in the north of Aleppo province on Dec. 22, 2018. - NAZEER AL-KHATIB/AFP via Getty Images

President Recep Tayyip Erdogan has raised the specter of a new Turkish military campaign against Kurdish forces in northern Syria following the killing of two Turkish special force police in a rocket attack on a Turkish convoy in the region.

“We have run out of patience regarding certain areas in Syria that have been the source of terrorist attacks on our country. We are determined to eliminate the threats originating from those areas,” Erdogan said Oct. 11, referring to Kurdish-held Tell Rifaat, which lies to the south of Marea, where the attack took place the day before.

The state-run Anatolia news agency named 11 villages around Tell Rifaat where, it said, “the terrorists” had deployed heavy weapons such as multiple rocket launchers and TOW, Katyusha and Grad missiles and were using them to “frequently strike Azaz, al-Bab, Marea and Afrin.”

Foreign Minister Mevlut Cavusoglu charged that Russia and the United States held responsibility for the attacks as well, vowing that Turkey “will do whatever it takes to cleanse the terrorists.”

According to the Syrian Observatory of Human Rights, the attack on the Turkish convoy was carried out by the Afrin Liberation Forces, and the Turkish military responded by firing artillery shells and rockets on villages where Kurdish forces were stationed.

Tell Rifaat is a corridor between multiple frontlines. Lying 21 kilometers south of the Turkish border province of Kilis, 22 kilometers  east of Afrin and 27 kilometers  north of Aleppo, the town has been in Turkey’s crosshairs since Kurdish forces seized it in February 2016.

Turkey sought to bargain over the area — first with the United States and then with Russia — as part of its Operation Peace Spring in northeastern Syria in October 2019. A Turkish-Russian deal reached in Sochi that month limited Turkey’s intervention to a border strip between Tell Abyad and Ras al-Ain, but contained a provision that “all YPG (Kurdish People’s Protection Units) elements and their weapons will be removed from Manbij and Tell Rifaat.”

In what has become a pattern since then, Ankara would bring up Tell Rifaat and Manbij whenever Moscow reminds Ankara of its commitment under a separate deal to eliminate terrorist groups in Idlib and reopen the M4 and M5 highways. In the meantime, Russia has allowed the deployment of Syrian government forces in Tell Rifaat and Manbij, in addition to Russian military police.

Besides the complex balance of power on the ground, a key question here is whether Erdogan and Putin reached some understanding on the issue at their Sept. 29 meeting in Sochi, which ended without a public statement. What could be Erdogan hoping for by threatening a military operation without a deal with Putin?

The leading Syrian daily al-Watan sees renewed Russian operations in Idlib as an indication that Putin and Erdogan failed to resolve their differences in Sochi. The Syrian foreign minister’s calls on Turkey to withdraw from Syria come across as a further sign that Damascus believes the Putin-Erdogan meeting ended without a compromise. Turkey’s establishment of a new military outpost in the Jabal al-Zawiya area in southern Idlib also points to ongoing differences, as do Russia’s intensifying air raids in the province.

Erdogan may trying to gain room to maneuver and bargain. Most Turkish analysts believe that Erdogan could hardly order a large-scale military operation and risk a major escalation without getting guarantees from Russia to use Syrian airspace. Reports that five Turkish commanders in charge of Syria-related missions sought early retirement last month have fueled speculation of rising discontent in the army over operations in which Turkish troops lack adequate protection.

For others, the prospect of a new operation in Syria is hard to dismiss because of Erdogan’s growing political and economic woes at home, which could push him into another military adventure to distract the public and stoke nationalist sentiments.

The perception that Ankara is setting the stage for a military campaign was also fueled when five mortar shells fired from Syria by unknown perpetrators landed in the Turkish border town of Karkamis, causing no casualties. The incident brought to mind an audio recording leaked in 2014, in which Turkey’s intelligence chief purportedly described how he could stage a missile attack on Turkey from Syria to provide a pretext for war.

Erdogan’s outburst is a response also to US President Joe Biden, who last week charged that Turkey’s actions in Syria threatened US national security and interests. By arguing that Turkey is under attack, Erdogan is seeking to turn up pressure on Washington to end support for the Syrian Kurds as he prepares to meet with Biden in the margins of the G-20 summit in Rome later this month.

In sum, the Tell Rifaat card appears to be a tool for Erdogan to preserve the status quo in Idlib. Yet such maneuvering cannot fend off Idlib-related pressures for good. Russia has shown no willingness to trade off Tell Rifaat and Manbij for Idlib and is unlikely to approve a new Turkish offensive. From Damascus’ perspective, the issue is highly critical because of the following considerations:

In another scenario, Turkey might get a green light for a limited operation in Tell Rifaat that would not impact the control on the ground in return for its withdrawal from the M-4 route in Idlib. Given the importance Damascus and its allies place on Tell Rifaat, any backstepping there would probably require a major step by Erdogan that would significantly alter the situation on the ground.