The Turkish president’s warnings are targeted as much at Washington and Moscow as they are at Syria’s Kurds. 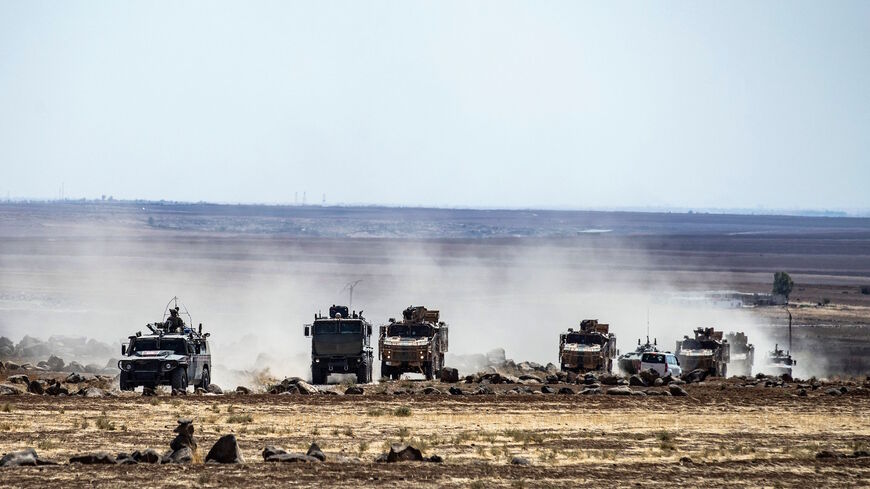 Turkish and Russian military vehicles patrol in the countryside of Rumaylan (Rmeilan) in Syria's northeastern Hasakeh province near the Turkish border on Sept. 16, 2021. - DELIL SOULEIMAN/AFP via Getty Images

Erdogan: Attack on Turkish convoy breaks 'the camel’s back'

Turkish President Recep Tayyip Erdogan said that rocket attack on a Turkish convoy in Syria that killed two Turkish special forces personnel has "broken the camel’s back,” adding, “We are determined to eliminate threats arising from there either with the forces active in these areas or with our own means.”

Erdogan may be ready to launch another military assault on Kurdish-administered areas of Syria. Or he may be sending a flare to US President Joe Biden and Russian President Vladimir Putin that something more needs to be done to address the Syria crisis on Turkey’s terms.

Turkey's president is boxed in by its “endless war” and occupation of Syria, the economic burden of hosting 3.6 million Syrian refugees and differences with Biden and Putin on next steps in Syria.

Two years ago this month, with a green light from then-US President Donald Trump, Erdogan launched “Operation Peace Spring,” a military attack on Kurdish-held towns in northeast Syria on the Turkish border, against what he labels terrorism from Syrian Kurdish groups there and to create a safety zone to address the flood of Syrian refugees into Syria.

Erdogan then reached a deal with Putin that brought in Syrian military forces to adjoining areas and limited Turkey’s occupation to two small towns, Tell Abyad and Ras al-Ain.

The Russian deal, however, promised that all the elements of the Kurdish People’s Protection Units (YPG) and their arms "will be removed” from adjoining areas, but that hasn’t happened.

Turkey considers the YPG the Syrian branch of the Kurdistan Workers Party (PKK), which both the United States and Turkey have designated a terrorist group. Erdogan’s public statements this week have linked the PKK and the YPG not just to terrorism against Turkey but also to the drug trade in Europe.

Putin has tried to broker a deal among the Syrian government, the Syrian Kurds and Turkey, but the pieces haven’t come together, in part because of the bad blood among all parties. Another reason is the United States, which maintains 900 troops in Syria and a partnership with the Syrian Democratic Forces, which is made up primarily of the YPG and with whom the United States has worked to combat the Islamic State in Syria.

Erdogan actually faces two fronts in Syria: the areas Turkey occupies via Syrian proxy forces in the Kurdish northeast, and its security role in Idlib in the northwest, which is primarily controlled by Hayat Tahrir al-Sham, a formerly al-Qaeda-linked jihadi group designated as a terrorist group by both the United States and the UN Security Council.

Putin has pressured Erdogan to excise the terrorist groups from Idlib and more or less step aside and allow Russian-backed Syrian forces to take out HTS and the other armed groups and reopen two key highways (the M4 and M5) that pass through there.

Erdogan and Putin met in Sochi on Sept. 29, but the readouts didn’t signal a deal on either Idlib or Tell Rifaat and Manbij, the Kurdish towns in the northeast in Erdogan’s sites following the Nov. 10 attack.

“The Tell Rifaat card appears to be a tool for Erdogan to preserve the status quo in Idlib,” writes Fehim Tastekin. “Yet such maneuvering cannot fend off Idlib-related pressures for good. Russia has shown no willingness to trade off Tell Rifaat and Manbij for Idlib and is unlikely to approve a new Turkish offensive.”

From Syrian President Bashar al-Assad’s perspective, control of Tell Rifaat and perhaps even Manbij by Turkish-backed Syrian armed groups would be an unwelcome boost for the opposition and a new threat to Assad’s stability.

Putin, as Assad’s main backer, therefore prefers to hold Erdogan back. The United States also wants to avoid a Turkish attack on areas controlled by its Syrian Kurdish partners. Erdogan and Putin might also settle for some give and get in both Idlib and Tell Rifaat.

“Turkey might get a green light for a limited operation in Tell Rifaat that would not impact the control on the ground in return for its withdrawal from the M-4 route in Idlib,” adds Tastekin. “Given the importance Damascus and its allies place on Tell Rifaat, any backstepping there would probably require a major step by Erdogan that would significantly alter the situation on the ground.”

The White House extension of the state of emergency in Syria on Oct. 7 placed Turkey squarely on the opposite side of US interests in northeast Syria, stating that Turkey’s military operations there “undermine the campaign to defeat the Islamic State, … endangers civilians, and further threatens to undermine the peace, security, and stability in the region, and continues to pose an unusual and extraordinary threat to the national security and foreign policy of the United States.”

Although US State Department spokesperson Ned Price condemned the Oct. 10 attack that killed the two Turkish soldiers and called on all parties to respect cease-fire lines, Turkish Foreign Minister Mevlut Cavusoglu lashed out, calling Price’s statements insincere and pointing to Washington’s role in supplying arms to Syrian Kurdish militants. "You are providing them with arms and then making a statement for show only. The insincerity is obvious there," quotes Diego Cupolo.

Price tried to lower the temperature on Oct. 14, saying that “Turkey, of course, is an important NATO ally. We have shared interests in any number of areas. That includes countering terrorism, ending the conflict in Syria, and deterring malign influence in the region.”

Meanwhile, despite the friction in US-Turkey relations and sanctions resulting from Turkey’s purchase of the S-400 Russian missile defense system, Ankara has requested F-16 fighter planes from the United States.

Erdogan “sees the request as one last test of confidence with the Biden administration, stressing that the administration could convince Congress to approve the sale if it truly cares to keep Turkey from gravitating to Russia,” Metin Gurcan writes. “The request is seen as a sort of a junction, with Ankara bracing for a new strategy, depending on Washington’s response.”

“Many in Turkey now wonder whether Ankara made the F-16 request only to have it rejected, in a calculated move to lay the ground for warplane negotiations with Russia,” Gurcan adds.

Although “Erdogan has even less room to maneuver vis-à-vis Biden than he has with Putin,” Cengiz Candar observes, Erdogan may yet pull back from the breaking point in US-Turkey ties, as he needs the United States as a counterweight to Putin.

We reported two weeks ago that the Syria quagmire has produced “a kind of fragile stalemate” among Turkey, Russia and the United States “that could break down at any time…Erdogan can’t ditch the United States completely, as he and Putin are not on the same page in Syria and Ukraine. He needs at least the illusion of an option in dealing with Putin to stay in the game. This is also a trump card for the US. The frustration for the Turkish president is that his foreign policy is personal and summit level. He and Putin meet and talk often. Erdogan and Biden, in contrast, don’t even try to fake it these days."